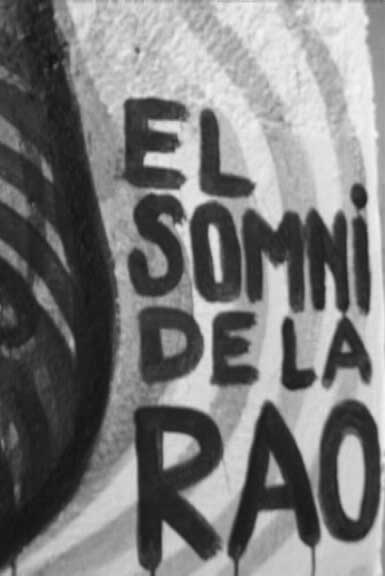 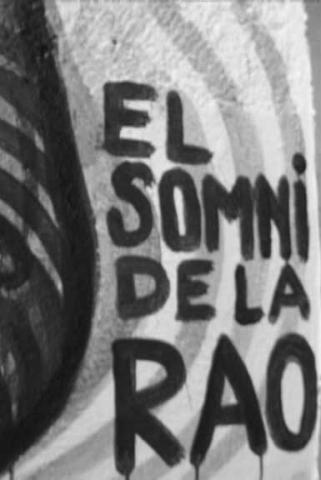 Each moment in time is endlessly transformational: the present transforms into another present, not into future1

Color, movement, people, talks, silences; the liveliness and the dynamic of an academic space. The crossing between one state to another – from quiet to noise, from contemplation to celebration, from alone to together – can come about suddenly, by opening and closing doors or climbing up and down the stairs. And if you climb up to the last floor of the Faculty of History and Geography of the University of Barcelona, you’ll come across an unexpected sight: mysterious monsters, wings, intestines, veins, bacteria, genitals, body fluids, staring eyes:

The Sleep of Reason, the Dynamic Mural Drawing by Marcel·lí Antúnez Roca.

The artwork drives us far from the university space, to an unworldly dream, where the body is torn into pieces and reconstructed in an arbitrary way. The resulting images affect directly the emotion, the instinct, the il-logic of the viewer; the logic is sound asleep anyway.

Unrolling the skein of the lines that cross the surface / intersect / tangle up / half-hide under the white, we can find specks from different time periods of art history. Starting with the surrealistic iconography, we go back towards Goya –the connection with Goya’s The sleep of Reason Produces Monsters is not just due to the title, but also because of the synthesis of the work: a man leaning over the table and monsters surrounding him- we go through medieval murals with flashes from hell2, to end up in ancient Greek pottery with images from mythical monsters. Although the connection to ancient artists doesn’t seem obvious at first, he shares with them “this horror vacui that sometimes invades” him3; besides, the Greek myths are often a source of inspiration for him.

Pulling another thread from the skein we can discern elements from the artist’s path in performance; the body fluids, the eerie dreams, the strange robotic mechanisms, the mythological and the hyper-logical beings are things that always played a significant role in his creation4.

An equally important part of it is the two-way relation between performance and drawing. According to the artist, “drawing was always becoming more and more important in my work. When I abandoned the collective work method5, I needed to establish mechanisms that would let me anticipate the final solution of my works. Drawing is one of these mechanisms…”6

So, initially the artist used drawing to create a kind of story board that would anticipate the course of the performance. Later on, Antúnez, always inexhaustible in iconographic and expressive means, took the opposite direction –from performance to drawing- and invented the dynamic-mural-drawings (DMD, dibujos-murales-dinámicos): murals that he would paint, then erase with color, repaint, cover with frames that presented other drawings. In the DMD the work changes every moment; the present transforms into another present, not into future. The previous phases of the artwork are slightly visible, as a skeleton or a tissue of the final work.

This image is not new; we can see something similar on the city walls every day: graffiti, stencils, posters, installations, slogans, stains, carvings, cracks that form a whole. The final artwork, a graffiti or a stencil, cannot be seen separately from the things that surround it.

But Antúnez creates something more than a multi-dimensional and ever changing image. He doesn’t just paint the wall; sometimes he crashes onto it, he stains himself with colour, he throws buckets with colours onto it, he intervenes dynamically and finally becomes one with his material of work, as we can see in the films that document the DMDs7.

So the artwork in The Sleep of Reason is more than the mural that we see before our eyes: it’s all the previous phases, it’s the artist’s movements, his incessant climbing up and down the ladder in order to cover the wall, the filling up and emptying of the buckets, his almost choreographed movements.

And despite the fact that the colours of the wall have gone dry, life is still rolling in front of it. The artist is gone, but the artwork is in a lively space crossed by all of us on a daily basis; we either pass it by hastily or stand for a while and have a silent talk with it. A two-way relationship: the work stimulates our thought or emotion and we give life to the space in front of it, thus to the work itself.

This kind of life is what we tried to capture in the video “Creative spaces – Dynamic glances”8; it was a team work by art history postgraduate students of the University of Barcelona, as part of the class “Audiovisuals and culture industries” (Audiovisuals i indústries culturals), under the guidance of professor Anna Casanovas.

The video is divided into two parts: the creation of the artwork –from the artist’s arrival and his talk to the people assisting the procedure until the completion of the mural- and the life at the university during these days –that more or less followed its usual rhythms. These parts are interchanging between them and cross each other at the elevator, which constantly opens and closes, always taking the viewer to a different level.

The recording was a result of a common effort, by a team of about ten people. Each one of us, coming from a different place and having a distinct culture and visual experience, would turn his/her look to different details; shadows on the ground, reflections on the window glasses, slogans on the walls, small talk on the benches. Sometimes our glances coincided, especially when it came to the images from the evolution of the artwork. The final result might not be professional, but it is interesting because it somehow fills in the gap between artwork and viewer, artwork and space. So, even if it’s not a documentary or video art, it manages to capture some of the dynamic of the artwork in space and time.

«The Sleep of Reason creates monsters»…

…and the awakening of imagination art.

2 About the monsters in art, you can also check Maro Psyrra, "The transcendental terror of the 'End" in contemporary art", Interartive #2, July 2008.