The transcendental terror of the "End" in contemporary art | MARO PSYRRA 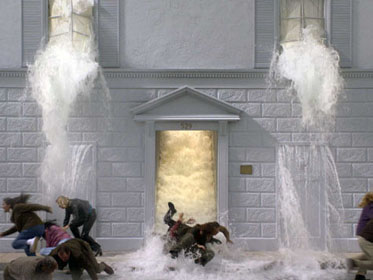 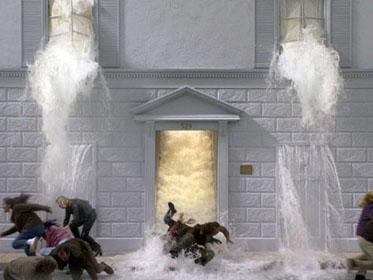 “Always look on the bright side of death”
Monty Python, Life of Brian 1979

Before the dawn of the new millennium, scenarios on the end of the world had already begun spreading by the media. Priests and believers appeared spreading the word about the upcoming Apocalypse, while the American cinema would invest on that with the movie “End of Days”. The end, of course, never came but many people kept on bearing the same fear, which didn’t leave contemporary art unaffected…

The Fear for the upcoming “end” (related in the western culture to the Apocalypse, the resurrection of the dead and the Last Judgment in the Josafat valley) is not a new thing. We see it in countless versions within human societies and it has the same basic function in all of them: “to form” and “to sustain” the bonds between God and believers.

The genealogy of the Christian Eschatology derives from Ezekiel and Isaiah and reaches the Apocalypse of John, who describes in a symbolic way the final battle between good and evil, the abolition of the world and the resurrection of the dead. The Apocalypse descriptions of characters that are beyond the ontological limits have given western art the possibility to form the indescribable, by making the transcendental fear tangible. Let’s recall, for instance, the demonic creatures of gothic art or the representations of the Last Judgment and the Inferno by the great renaissance masters, the Last Judgment by Michelangelo on the Sistine Chapel, or the irrational beings of Hieronymus Bosch… But also the vivid neogothic representations of the Last Judgment in Victorian England, which have captured popular imagination1. Then, art put new demons on the map, which were out of the scope of the infernal kingdom, and into the human world (“Dracula” by Bram Stoker, “Frankenstein” by Mary Shelley, who put forth the terror that “science” could cause). It is the time when images of the Christian Inferno and of the Second Coming begin to fade and disappear from the popular culture, only to come to the fore in a different way during the 20th century through works of writers and artists.

In the best sellers popular culture the end of the world becomes a favorite. Back in the ‘50s Richard Matheson wrote “I am Legend” where in first person narration we hear the story of Robert Neville, the last man on earth wandering alone in Los Angeles of the ‘70s. Alone? Not quite – he “coexists” with an army of humans mutated into bloodthirsty vampires because of the spread of an infectious virus.

TV series with the same subject come to great success (let’s remember the ''Twilight Zone''). In the cinema, eschatological movies proliferate. But now the “Antichrist” uses a variety of methods to cause catastrophe. “Nuclears” are now passé and we have moved to the domination of the fear of ecological collapse, or the pandemic caused by invincible viruses or even the intervention on the human gene by evil scientists and companies. The new Antichrist may even use nanotechnology2. Fear of technology and of the power that uses it is often related to the contemporary eschatology.

After all, Chernobyl, Hiroshima or Auschwitz are phobic forms imprinted in the popular unconscious because they have truly existed in our historical time and aren’t even creations of the imaginary space-time of literature, religion, legends or personal fears. And they are nightmarish forms reeking odors and spreading terror more than the paintings by Bosch and the verses of the “Apocalypse” and the “Divine Comedy” do. Let’s remember Adorno, who claimed that to write a poem after Auschwitz is barbaric, or the poetic “Howl” by Allen Ginsberg…

Living and facing the same fears and phobias, the contemporary artist takes part in the forming of images of the “end”.

The video art veteran, Bill Viola, with the video installation Deluge, presented as part of the exhibition Going Forth by day, takes part in the game of destruction3. The story begins in front of a building façade. Pedestrians cross the pavement, while others go in and out of the house carrying shopping bags or furniture. All of a sudden, while everything moves in a daily routine pace, a sudden rush of waters floods the building and washes the people and their objects away. The peaceful image of the first shots turns into chaos and despair takes the place of earthly indifference. Viola visualizes a similar end to that of Noah’s Flood. The only difference is that in his end there is no hope of survival.

On the other hand, Canadian photographer Jeff Wall “prophesied” the “end of the world” in two of his works, Vampire’s Picnic and Dead Troops Talk, photographs from the ‘90s. In the first one, Wall composes a morbid image of vampires devouring human flesh. The scene takes place in the forest, in the ruins of a house – an allusion to the former normal situation. Humans – masters of the natural order – have succumbed to the voracity of the transcendental beings and the narration of the story remains “open”. According to the mythological substratum of vampirism, the owners of the house are to become vampires and in that way they will continue the transformation of the world and the breakdown of order. However, Wall’s photography remains harmonious, almost follows painting rules and doesn’t “provoke” the viewer. His vampires are having lunch, just like humans, and aren’t concerned about human life. They see it as food – as a delicious piece of pork. It is an image which functions as a protest against the petite bourgeoisie, which glorifies food and consumption-usage of nature as it feeds itself on similar flesh in vampire “bliss”.

In Dead Troops Talk, the world catastrophe comes from man himself. After war and as all nature has been destroyed, soldiers wake up, but they are not vindicated. They turn into zombies, cursed to wander in the world of living. The composition looks like a photo-document of a war front and is based on the relationship between tradition and present reality. It actually parallels the thirst for war with the destructive wandering of the zombies, just like it was presented in Romero’s film, The Night of the Living dead, and adopts certain elements of parody.

Besides, cinema and the so-called “paranoid” kind4 has been one of the most fundamental resources of contemporary art. Low budget and bad effects movies created a different esthetic on the subject of the “end”. Italian cinema zombies, German neo-gothic sex-vampires and English cinema homosexual Draculas have demolished the outrageous sight of the transcendental beings. The almost caricature representation of the former terrifying creatures has removed the fear of the public and has proved that the “end” may come with lots of humor. Artists, of course, didn’t just let this trend go by.

Maurizio Cattelan approaches the subject of the “end” in a humorous tone, which strikes directly against the head of church, the intermediate between God and man, the Pope. In his work La Nona Ora (1999), which met strong opposition in catholic Italy, the Pope drops dead after being hit by a meteorite. Nature attacks and God doesn’t warn his representative. Ignorance kills him and the catastrophe scenarios perish along with him. But the Italian artist goes even further. The rise of the dead, which means the beginning of the end, appeals to him. The tomb with the hands coming out of it in a gesture of prayer (Untitled, 1992) and the hole through which the figure of the artist emerges (2001) are direct references to the concept of the end.

Artists don’t abandon the idea and the image of the “Inferno”. But the inferno of the artists – to paraphrase Sartre – is here. It’s not something transcendental. The social reality of the ecological disaster, the war, the alienation, the lack of communication between people compose our own everyday Inferno. So the artists turn to images which use the familiarity of tradition but have been enriched with the contemporary questionings on the “upcoming catastrophe”.

The greatest part of postmodern art abandons the godlike content of the eschatology. It gives and takes things from the popular phobias about the “end of the world”, but uses only the eschatological shell of the phobia. Following the successful patterns of popular literature and commercial cinema, it eventually makes fun of the eschatology, criticizes the “Christian” obsession about the end of the world and strips the ideological significance of faith. Indeed, Maurizio Catelan’s catalytic humorous tone forms an air of “circus” around the “end of the world”, which demystifies even the last grains of “religiousness”.

The “circus” air or the “carnivalesque”, according to Bakhtin5, a Russian literature theoretician, turns into a general, subversive principle which goes beyond the established limits and undermines the monologism of the eschatological dogma as well as that of the representational reason. Carnivalesque and unforced laughter are the elements that “save” us.

According to his theory, parody undermines the dominant ideology, the dominant esthetic ideas and the dominant symbolisms of a society. It interferes in the “terrifying”, the phobic and the authoritative. And through similar forms it smashes seriousness and eventually their power. The “carnivalesque” is one of the major devices of contemporary literature and thus of contemporary art with artists visualizing an “end” like the Exorcist parody.

Let’s remember Gabriel Garcia Marquez’s novel “One Hundred Years of Solitude”. The novel hero Jose Arcadio Buendia “decides to examine, with the help of daguerreotype, the ecclesiastical truths, to discover the scientific proof of the existence of God. And since he cannot picture God on a photo, he concludes that God doesn’t exist. The function of the circus substitutes the religious function, the Bible.”6

2 This was the subject of the recent movie by Μichael Crichton on the escape of thousand of nanomachines from the labs.

5 Bakhtin, Mikhail "Epic and Novel: Toward a Methodology for the Study of the Novel" ss. 68 - 81 teoksessa Modern Genre Theory. Edited and Introduced by David Duff. Longman Critical Reader, 2000.

Images published courtesy of the artists