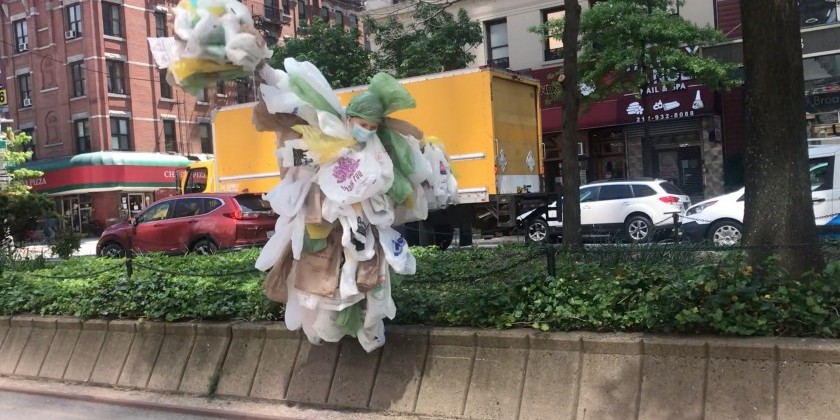 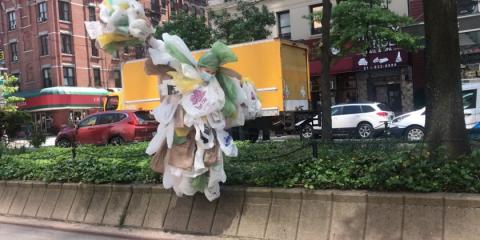 As Jody Sperling moves forward on Broadway in her plastic bags costume, a noise sets in. In the empty and frightened city, this character drowned in bags moves along the streets, sidewalks and flowerbeds, passing by nature, moving around water and trees, returning afterwards. Sperling’s performance path alludes to the movement of plastics that are dragged into nature helplessly.

The performance that gave rise to the 2020 Single Use video, brings the reflection on environmental pollution, one of the biggest problems that interfere in the harmony of the planet. This walking plastic being reflects the agony of an artificial world.

Jody Sperling masters Loïe Fuller’s aesthetics, a work she develops with the company Time Lapse Dance, causes her movements from the immensity of the costume. Like Loïe Fuller, Sperling is absorbed in her costume. Her body fades away in several movements. But instead of the white silk fabric used by Fuller in the early 20th century, in Sperling’s performance, her body is surrounded by over a hundred plastic bags.

In her costume, a kind of parangolé is configured. Parangolés were capes, standards, and fabrics created by the artist Helio Oiticica in the 1970s. Such ornaments wander the streets of New York, grasping the interaction and the bodily relation with the work of art.

In Single Use, an allusion may occur with the improvised garments of the homeless people, who carry the city traces with them. They pile up fabrics, bags and objects, dragged along with their bodies. A traveling shelter that moves in the urban dryness.

Plastic pollution and the cities coldness are evoked in Jody Sperling’s performance as a warning. Social isolation amid 2020 pandemic, raised awareness about nature and the environment preservation importance, for mankind survival. The short break of human intervention allowed nature to slowly recover.

The performance also aims to criticize consumerism and disposable culture. Sperling begins and ends her journey facing a shop window, in a moment of contemplation and awareness of the consumerism industry. The multiplication of bags and disposable products are affected by an existential emptiness, that gets stuck in the illusions caused by distorted images.

While embodying her bags suit, Jody Sperling introduces us as plastic beings. But within this tangle of plastics, a ballerina moves, being able to dance and roll through the streets of Broadway, reminding us that art keeps the body alive.