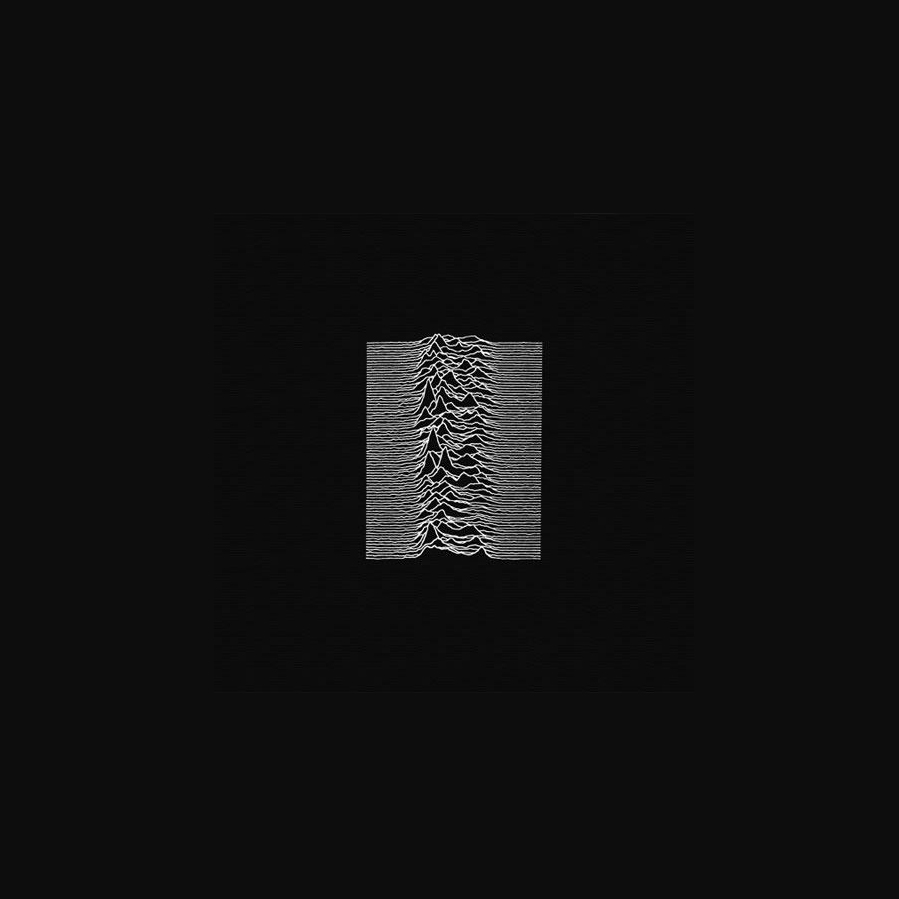 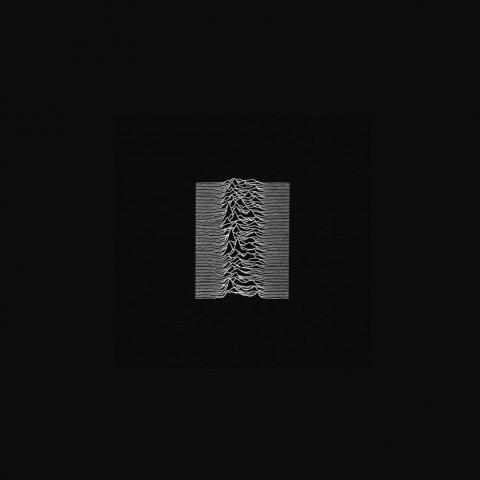 This is the way, step inside...

A  b l a c k  s q u a r e; nothing disturbs its hermetical silence apart from some  w a v y  l i n e s  in the middle. Words, titles and explanations are absent. It stimulates your curiosity for the Unknown Pleasures hidden inside.

Thus you take the first step: from image to music.

Once the bass line crosses the air, it gets you into a world of dim light, moist melodies and strong poetry. Joy Division's Unknown Pleasures (1979) is one of the groundbreaking albums in the history of rock music. In a time when psychedelic rock was wearing itself out with endless guitar solos, a smugly show-off of virtuosity, and punk was lighting up the fire of rock rebellion with sharp riffs and loud screams, Joy Division opened up a different road, more internal and mystic.

Ian Curtis' deep voice and the leading role of the bass -a trademark for the group- add an even stronger intensity to the lyrics that talk about quest, pain, separation, meta[...]. An album that is not just a couple of hit songs, but is meant to be listened to from beginning to end as a complete work.

And this is when the image gets back.

Music is time. Time is experience. As you play the record again and again, its atmosphere permeates the moments that accompany its listening. It influences mood, thought, action. All these are imprinted onto memory as a unity. So, every listening gets connected to experience and images, that come back in memory once you listen to the same music again.

In other words, every music album carries onto it countless images: it is the memories of everyone that has ever listened to it. An immense and unexplored field of images, the first of which is the cover.

Usually the cover aims to "advertise" the band, by promoting a certain style, in order to "sell" the record. The band's name and sometimes a photo are indispensable elements of the "product". However, a record sleeve that has no picture or name printed on it, is something different: it is a visual artwork, that introduces us to the music. This is the way, step inside1, it says...

When Peter Saville was assigned to design the cover for Unknown Pleasures he was given no instructions; all he was given was an image, where you could see a hundred pulses from the first Pulsar star discovered in 1967, as it was presented in the Cambridge Encyclopedia of Astronomy. The image wasn't restricting the designer's creative thought, but it was stimulating it to go further, into the infinite, the unexplored, the abstract.

The abstract image lets the music surge and breathe, because as a visual stimulant it doesn't give clear directions as to how the listener is supposed to perceive it. It is just a link between the visual and the sonic. The search of the link between music and painting played a fundamental role in the emergence of abstract art during the beginning of the 20th century.

Many of the artists of symbolism and the artistic Avant-Garde of that time were seeking to experience Synesthesia, that state of mind where one can see colors when listening to a sound or listen to melodies when viewing a painting. This search got them out of the limits of the representational, where the image of the world is dissolved into pure colors and shapes. The road that lead to non-representational art began with the painting of elements such as the light, the air, the water,

In Mikalojus Ciurlionis' painting "Sonata of the Sea - Allegro" (1908) the waves and the sky are represented with successive layers of colors. He is just one step away from crossing the limits of the representational: the depiction of the visible has given way to color harmony.

In the same period Wassily Kandinsky surrenders to the charm of the color and the line and creates works with no reference to the visible world. These works don't project anything else than what they actually are: color and form. The only reference to something other than the reality of the canvas is to music, to which the titles of the paintings allude: "Composition", "Symphony", "Improvisation". In his theoretical texts about visual art Kandinsky talks about melodic and symphonic compositions and about rhythm; at the same time, he visualizes the Gesamtkunstwerk, a complete work of art that includes sound, color and motion2.

In contemporary art, with the installations, video art and performance, these three elements very often coexist -magnifying the artwork's impact on the senses of the public. Synesthesia has formed part of our everyday language and experience: "Make this sound more yellow!"3 was one of the strange instructions given to Joy Division by producer Martin Hannet, during the recording of Unknown Pleasures.

Got the spirit, lose the feeling, let it out somehow...

In the beginning of the century, however, the coexistence of sound, color and movements in the same artwork was still on an experimental level. One of the first samples of such a work was Rhythmus 21 by Hans Richter (1921), a three minute film where the musical and the visual part are intrinsically connected between them, amplifying thus the impact of the work on the viewer. The image captures one's attention immediately: geometrical shapes -white rectangulars in black background or the opposite- move and change color and shape, size and place as they follow the rhythm and the melody of the music.

The mystic power of black, the immense void of white: a primordial visual alphabet whose first letter is

In Kasimir Malevich's Black Square (1915) the painterly composition is as minimal as it gets. A black square in a white field. So simple, so immense. According to Malevich "The square = feeling. The white field = the void beyond this feeling", a religious feeling that arises once you come face to face with absolute form: "I see within it something which people once saw in the face of God"4.

The connection of a black square with the spiritual and the divine seems quite obvious for anyone with an affinity to byzantine art and orthodox tradition5: in byzantine art the perspective and the proportions are deliberately distorted, in order to create a painterly reality distant from everyday experience. The hagiographer approaches the transcendental through the geometrical, the two-dimensional and the schematic. With the passage of the centuries, the smoke of the candles blackens the colors of the images and therefore most icons in orthodox churches end up being almost black pieces of wood; the image cannot be seen under the layers of smoke and the dim candle light. Yet the congregation still recognizes the divine in these icons and worships it. The icon slowly turns into a black square, which receives the prayers of the people.

A black square with the wavy traces of a distant star: Peter Saville's cover for Unknown Pleasures was voted in 2008 as "the most iconic album cover of all time"6. Iconic like a religious icon. An image printed onto the conscience of the public as a symbol of the metaphysical and onto countless t-shirts as an alternative fashion style. It was an unexpected commercial success for a band with a "difficult" sound and a designer denying conventional design. Saville had just wanted to create a cover as he himself would have liked it, simple and with no reference to the music it accompanied. A risky choice, if we consider the fact that it was the debut album of an unknown band, and that up until that moment nobody -not even the Beatles in the White Album or Andy Warhol for the record sleeve he had designed for Velvet Underground- had dared to remove the title or the band name from the sleeve. Yet the public bought the record for this reason precisely, to see what was inside7.

Saville had completed the cover before hearing the album, which means that he wasn't influenced by Joy Division's sound during the creation of the sleeve. Strangely enough the music befits it; music and image constitute an artwork, but are still able to function independently, as two separate entities.

As in Malevich's work, Saville's "black square" acquires a spiritual dimension and becomes some kind of gateway through which feelings are released: Got the spirit, lose the feeling, let it out somehow8 Like a minimal icon of a personal god, it stands there totemic and mysterious, waiting to receive the thoughts and the feelings of the listeners every time the music plays in their minds.

Joy Division, documentary directed by Grant Gee, 2007. You can view the documentary on line on YouTube: http://www.youtube.com/watch?v=gvsG2lq_oVg (link to part 1, retrieved in July, 2009)

Control,biographical film directed by Anton Corbijn, 2007.You can view the film on line on YouTube: http://www.youtube.com/watch?v=-EVDR-PIe1w (link to part 1, retrieved in July, 2009)

When Chagall learnt to fly. From Icon to Avant-Garde , Thessaloniki: State Museum of Contemporary Art, 2004.

1 "This is the way, step inside", verse from Atrocity Exhibition, a song from the Joy Division album Closer (1980). The verse was written in the inner sleeve of Unknown Pleasures and was carved on the vinyl.

2 See Wassily Kandinsky, Concerning the Spiritual in Art, first published in 1911. You can read the entire book on line: http://www.mnstate.edu/gracyk/courses/phil%20of%20art/kandinskytext.htm (link retrieved in July, 2009)

8 "I've got the spirit, lose the feeling, let it out somehow", verse from Disorder, the opening song from Unknown Pleasures (1979) by Joy Division.