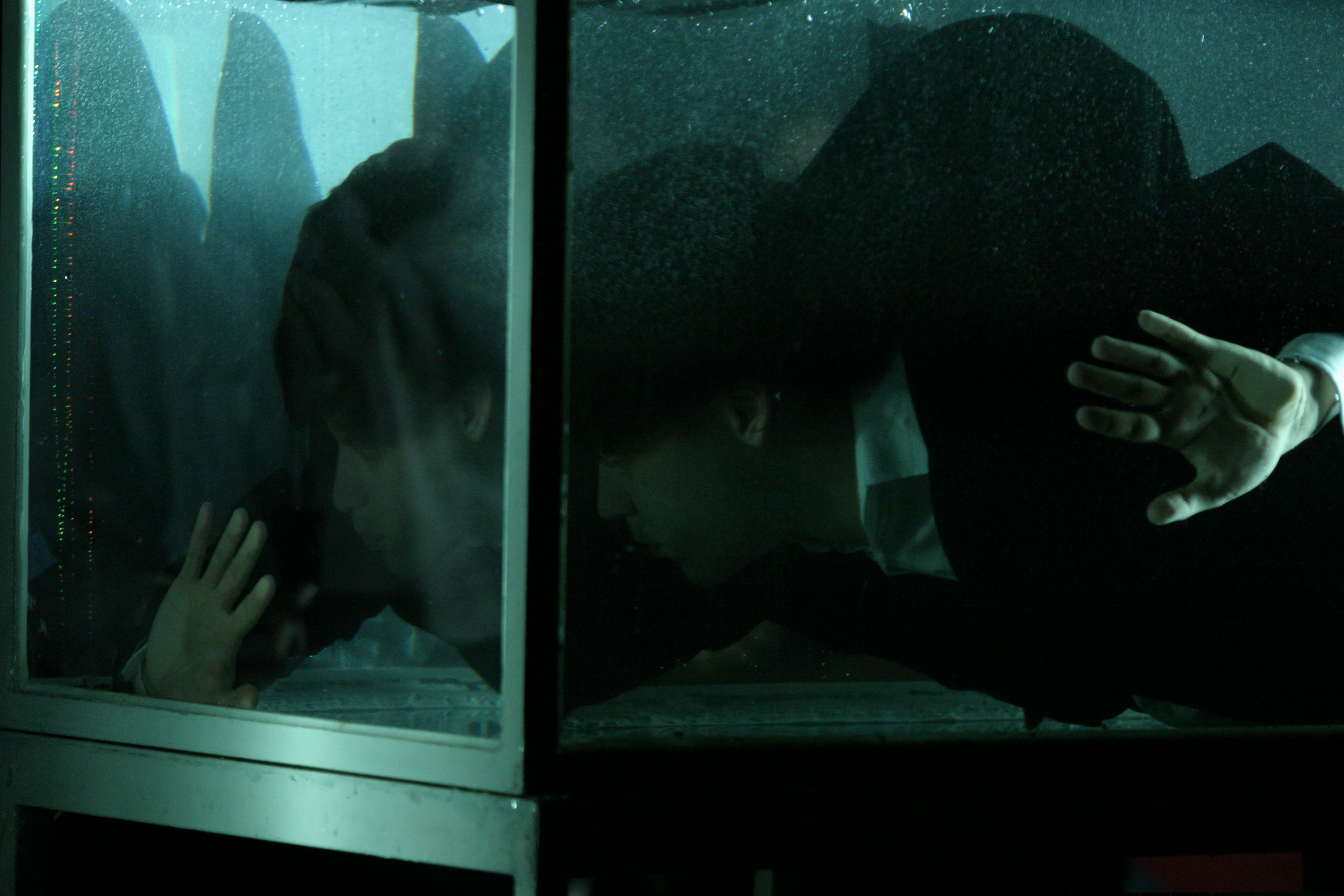 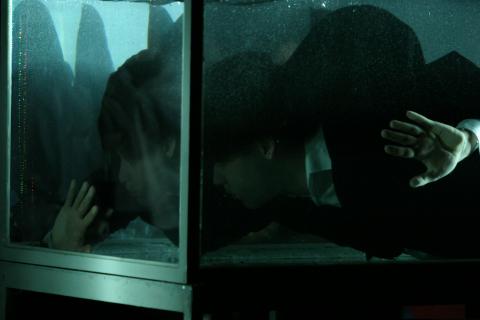 "Breathing corresponds to the first autonomous gesture of the living human being. To come into the world supposes inhaling and exhaling by oneself".
Luce Irigaray1

Since the day of birth to the day of death, our breathing marks the autonomy of our Being; it sustains our life and formulates our thoughts and actions.

One breath only can describe agony, hope, passion, despair in the most concise manner.

Breath, what a terse and eloquent way to talk about life.

Bringing theatrical minimalism to its limits, Samuel Beckett used one breath only as the sole content of his play "Breath" (1969). Pure meaning stripped of theatricality and tradition, pretext and heroism.

Despite the brevity of the theatrical piece, which is supposed to last about 30 seconds, for four decades now "Breath" has been an issue of talk and a source of artistic inspiration. Here we'll see how it has been adapted by Damien Hirst, Adriano and Fernando Guimarães and Nikos Navridis: having the same point of departure, the four visual artists follow different expressive and aesthetic paths, to converge in the ideas presented, life and death in general.

Beckett's play is short and precise: It takes place on a stage littered with rubbish; it begins with a cry, followed by a deep inhalation and exhalation while at the same time a light fades in and out accordingly; a second cry is heard and the play ends3.

Walking on the fine line of minimalism, Beckett manages something that seems impossible: action, plot, logos are all synopsized into breath, light, crying.

A drama with no act, a tragedy with no words.

But still, we are within the realm of the Aristotelian definition of tragedy, to the extent that "Breath" is an "imitation of an important and perfect act" and that it manages "by evoking the sympathy and the fear of the viewer to deliver him of such emotions"4. The important and perfect act here is life which is presented complete: it comes with a cry, it evolves breath after breath and it ends with another cry. The emotions of the viewers are stirred by the allusion to the most primordial agonies of the human being: life and death.

The light fading in and out stresses the basic act, breathing. The scattered rubbish reminds us of the physicality of our existence, which is doomed to decadence and death, just like material things that have been used up and thrown away.

This reference to the decadent and suffering body is present in Damien Hirst's "Breath" (2000), where the stage is covered with hospital garbage. When Hirst was called to shoot this film as part of the project "Beckett on film", at first he thought the text was "incredibly precise and strict" but then he was taken by Beckett's "massive sense of humor"5.

Hirst gives us a bird's eye view of a nowhere land; the camera is hovering above it and moving accordingly to the sound of the one and only breath. The cry is missing; all we have is the sound of a forced inhalation and exhalation that propel us onto the piles of medical litter, which fill the stage.

Hirst's choice to use this kind of garbage connects the video with a significant part of his work that is centered upon life and death: In "Pharmacy" (1992) all the medicine was properly arranged; here it's been used up and thrown away. In his formalin tanks the bisected animals exhibit the functions of the living organism, except that they are no longer living; here the interior of the body is vaguely portrayed by the sound of one of its functions -breath- that marks the passage from life to death.

There is an odd affinity between Damien Hirst's formalin tanks and Adriano and Fernando Guimarães' staging of "Respiração +" (2007)6: the performance takes place in two transparent tankers filled with water, where the performers dive with their clothes, as they try to hold their breath. Here what's exhibited is not bisected animals, but living people, acrobats on the rope of life and death.

It seems like some invisible hand pushes them inside and forces them to stay under the water surface until they run out of breath; it's like a torture on political prisoners. When they get their heads out, they still aren't allowed to breathe freely, as they start reciting technical texts about breath7 - something that also recalls violent interrogation methods. Logos, the one thing that's missing from Beckett's text, is present here, except that it's not a poetic one, but the cold word of science - a forced testimony.

The Guimarães brothers, who often seek inspiration in the subject of respiration and the works of Beckett, recognize that Beckett's play "is a visual work". What Adriano Guimarães sees in it is "life in 35 seconds, and what you have is rubbish, organic material, what the human being is made of"8. So, rubbish is seen as a metaphor for the human body, which is finite and disposable, something that reminds us of Hirst's allusion to medicine as a reflection of the human organism9.

Towards a more poetic route, Nikos Navridis' "Breath" (2005) verges on immateriality. The installation space is articulated by video projections on the floor and haunted by intense breathing sounds. The video projections of garbage images run through the stage, like fleeting colors that temporarily stain every visitor that walks upon it. The visitors' bodies become a living projection screen, thus adding a corporeal element to the work. Their momentary presence on that stage and their subsequent absence both act as a reminder on the transience of life.

The people who walk on Navridis' installation have the power to become the actors in a short theatrical play that has no text or plot in its screenplay. So, they are left with the freedom to improvise on their words or actions, as they do in their real life. At the core of Navridis' creation is "the human being and the way that it faces the world; the human being as a measurement of the world, the human lived experience"10.

"The human being is the measure of all things"11; Protagoras' words become the essence of Navridis' "Breath". As for the tour de force that forms it: the will of the individual.
Beckett's "Breath", despite its surprising and puzzling brevity, has the power to stimulate and inspire. In the hands of Nikos Navridis, Damien Hirst, Adriano and Fernando Guimarães it becomes more than a staging or a d' après; it evolves into pure artistic and noetic expression, leading your thought towards a contemplation of the brevity of life, the violence and pain that accompany it and the personal will that shapes it.

3. The entire play reads as follows: "CURTAIN. 1. Faint light on stage littered with miscellaneous rubbish. Hold about five seconds. 2. Faint brief cry and immediately inspiration and slow increase of light together reaching maximum together in about ten seconds. Silence and hold for about five seconds. 3. Expiration and slow decrease of light together reaching minimum together (light as in 1) in about ten seconds and immediately cry as before. Silence and hold about five seconds. CURTAIN". Then the writer gives some additional information: "RUBBISH: No verticals, all scattered and lying. CRY: Instant of recorded vagitus. Important that two cries be identical, switching on and off strictly synchronized light and breath. BREATH: Amplified recording. MAXIMUM LIGHT: Not bright. If 0 = dark and 10 = bright, light should move from about 3 to 6 and back". See Samuel Beckett, Collected Shorter Plays, U.S.A. 1994, pp.209-212.

11. Protagoras emphasized on the role of subjectivity and relativity to human knowledge, as our perception is the only way to understand the world; he said that "The human being is the measurement of all things, of things which are, that they are and of things which are not, that they are not" - in ancient Greek: "πάντων χρημάτων μέτρον ἐστὶν ἄνθρωπος, τῶν μὲν ὄντων ὡς ἔστιν, τῶν δὲ οὐκ ὄντων ὡς οὐκ ἔστιν" (This quotation is recapitulated in Plato's Theaetetus, section 152a).