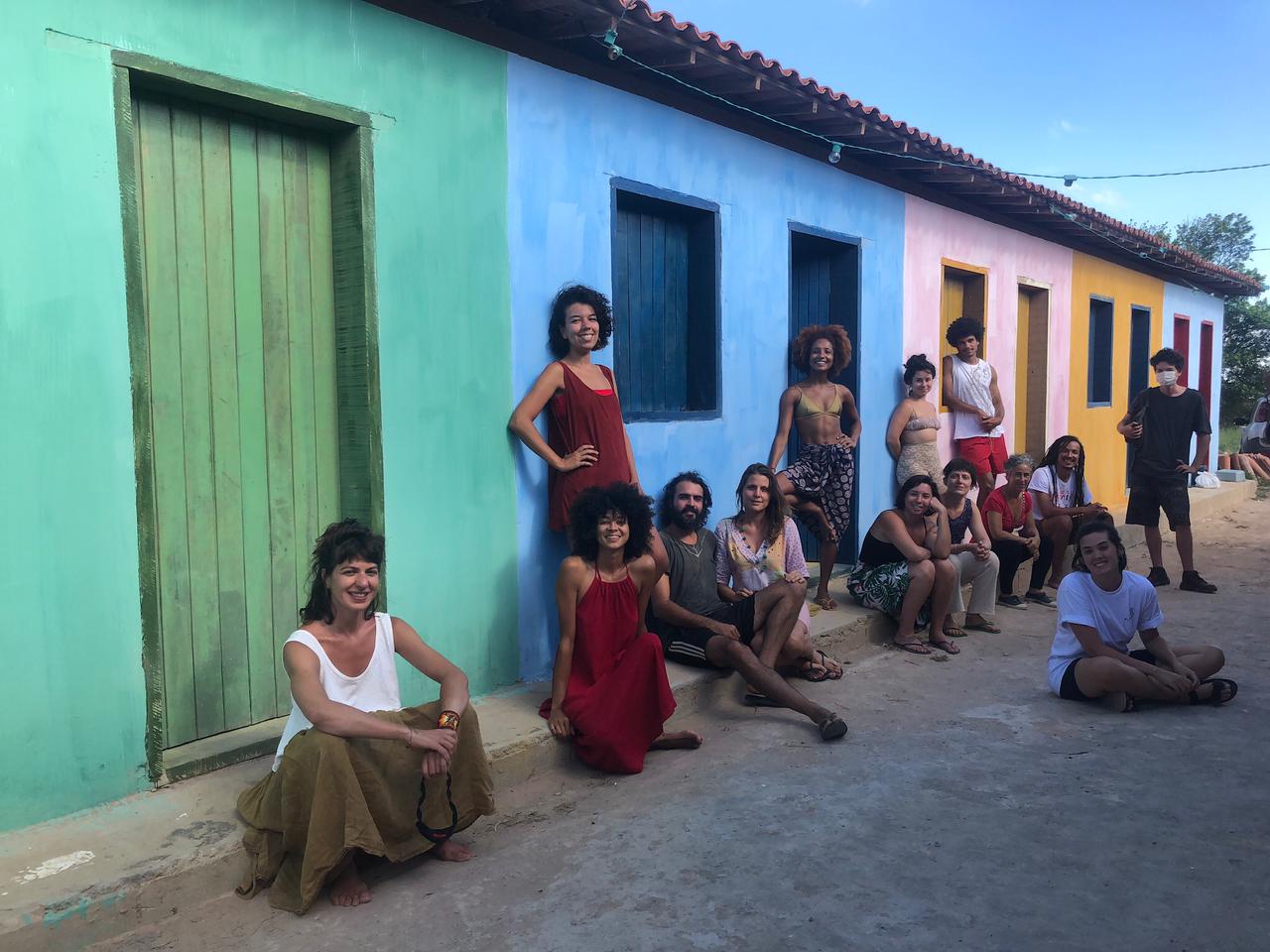 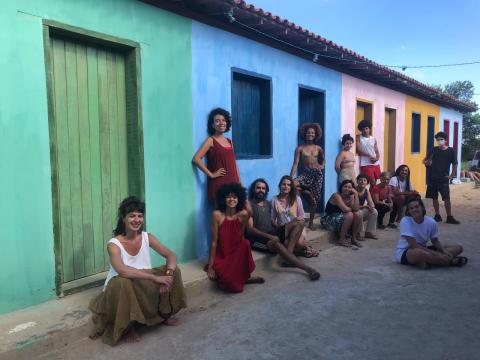 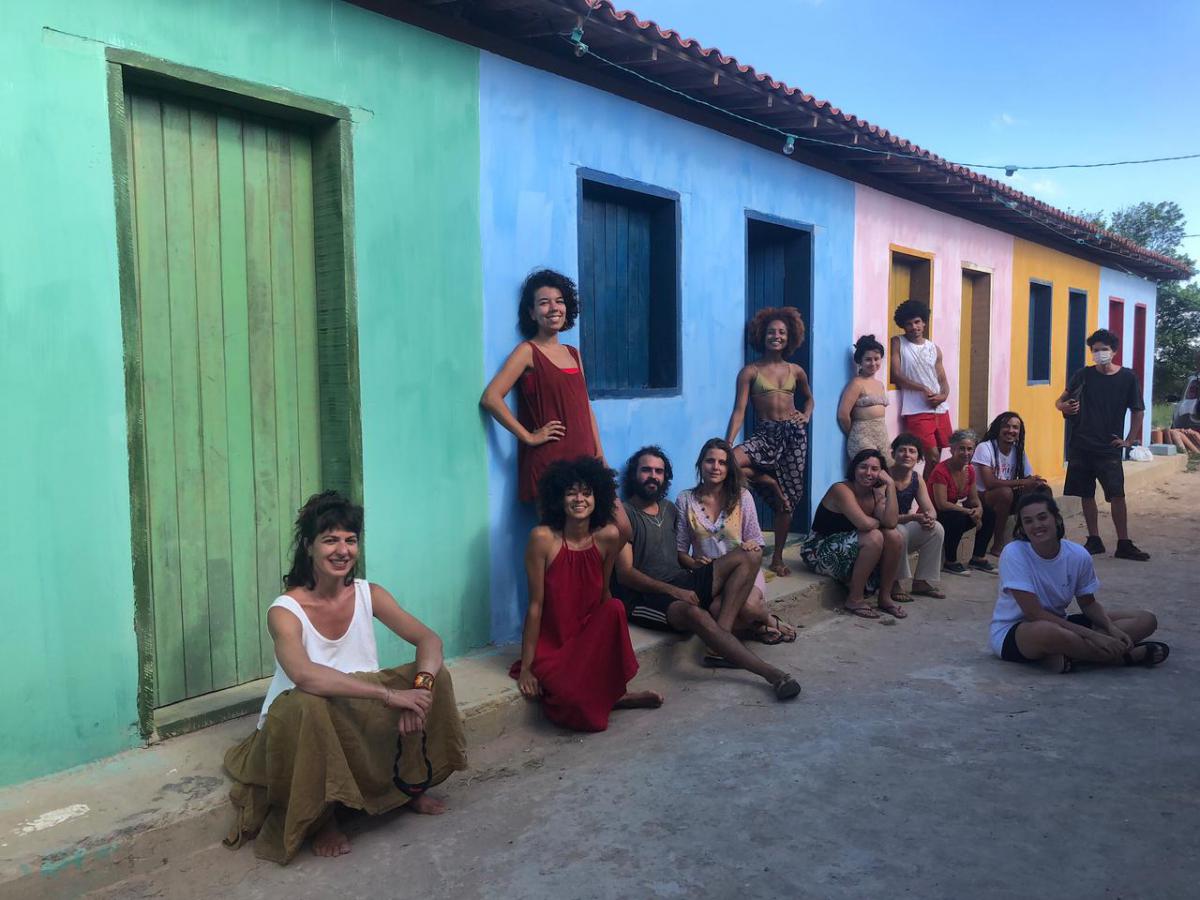 Terra Afefé is a work of art located at Chapada da Diamantina, Bahia, with the idealization and materialization from the baiana visual artist Rose Afefé (Varzedo, 1988). Since 2018, the artist has been building a poetic project of a microcity through bio-building, that is, begging with concern about environmental impact, in resonance with the ecologies of the world and minimizing the human interference on Earth. Inspired by her references, memories, and stories from her childhood, Rose builds with clay the landscape where once she lived, sharing with us the experience of growing up in the country site of Bahia. If we think about the conventional techniques of art, like painting or sculpture, even those are present in Afefé through the colors in the buildings, in the landscape of Chapada da Diamantina, and in the plasticity of the mud. Besides, this is an artistic project in a continuum construction, which everyone who had passed by it is invited to participate and collaborate with their own personal or collective knowledge.

The project is self-managed and offers immersions and artistic residencies, understanding the artistic practice in its broad and interdisciplinary sense, expanding the possibilities of collaboration of people with space.  From calls and invitations, from time to time, Terra Afefé is inhabited by different groups according to the current proposal.  In each immersion and or artistic residence, working in partnership with diverse professionals from the art world, new collaborators are aggregated, which makes this land more fertile and heterogeneous. Just like an agroforestry system, different bodies share the same space, creating an internal balance that self-regulates and, luckly, crack the social status quo.

Terra Afefé has the policy to prioritize the presence of Afro-descent, PwD, lgbtqia+, indigenous or with low financial resources artists, once the whiteness is the majority in art as a whole, whether in its places or its history. Joints of scholarship and funding are frequent movements in Afefé, aligned with a body more sensitive to social inequalities and the subjectivities that constitute these inequalities. The urgency to break with the hegemonic system of art and life is latent in Rose's artistic research, considering she lives this disruption as a woman, afro-descendant, being from northeastern Brazil and lgbtqia+. 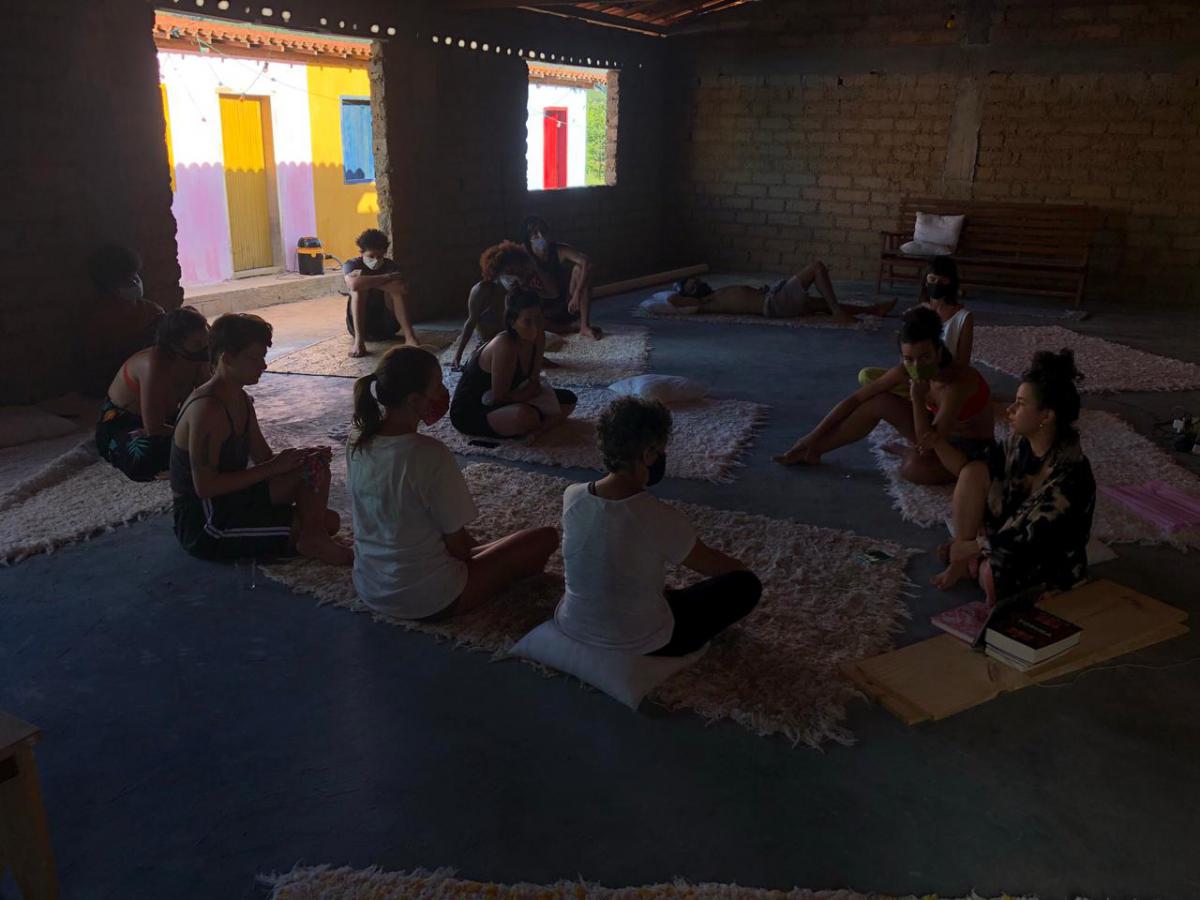 Between December 24th and January 3rd of 2021, Afefé realized the artistic residence Apaziá[1]. Proposed by the artists Rose Afefé and Dan Odan and by the curator Paula Borghi, the artistic residence intended, as its name suggests in Portuguese, to "appease" the body that was (and still is) in a pandemic under a genocidal government. Were realized typical activities to other immersions of Afefé, like bio-building practices that leave a material contribution to the space. There were collective moments of relaxation like conversation circles, parties and bonfires; tours to local attractions in Ibicoara; And also, activities proposed by residents according to their knowledge, such as dance classes, music, among others. Adding to this, Apaziá brought punctual and specific moments, above all, it was the intersection between the poetics of each one and the encounter of diverse experiences and perspectives. We believe that each participant went through and was crossed by this experience.

Terra Afefé is an artistic practice capable of driving transformations in subjective order, mainly in the scope of creation. By acting as an affection, not because of its quality of emotion, but because it is a force that acts in subjectivity, and its shown by the sense of the verb to affect, it is characteristic of Afefé to touch, disturb, shake, reach and traverse the bodies of who transits through it. In summary, in the subjective experience, art operates in our bodies and the world through affections, such we are crossed by the effects of its presence, in this case, by the artistic experience in Afefé. 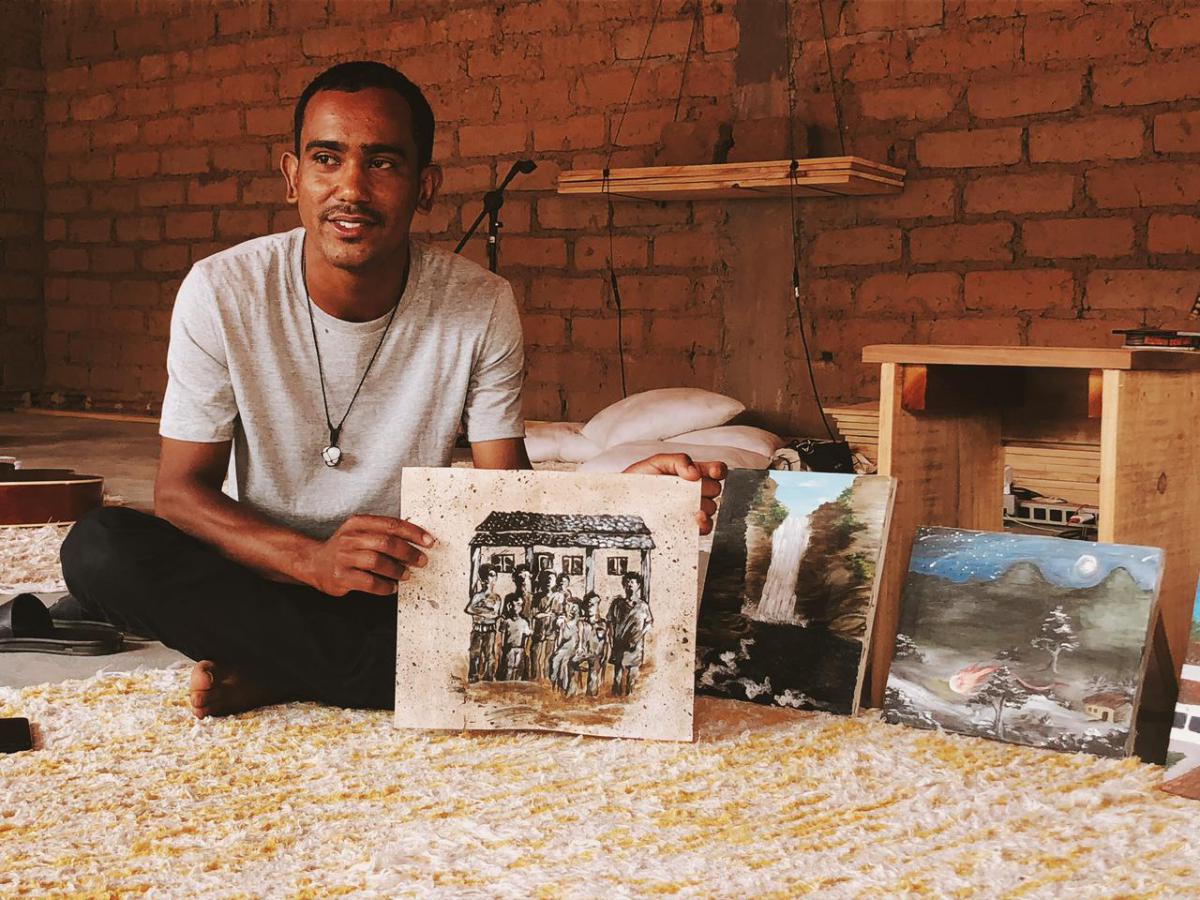 To meet the affections that awakened in our bodies during the Apaziá residence, it is worth mentioning that we experienced moments of learning beyond art, even through art. At all times, we were crossed by identity and environmental issues, confronting our agency in the world, problematizing, and discussing not only behavioral questions inherent to collective coexistence but living them daily. In this way, confrontation is not always a fight, but it can be a vehicle for reflection and change; the same way as disaffection can be an affection.

To subvert artist Hélio Oiticica's phrase[2], “from diversity we live”. Apaziá provided the experience of different languages, which made it an especially rich immersion. Residents involved in visual practices, curatorship, dance, fashion, music, education (educators and students), social projects, among others, were present. As well as the plurality of artistic languages the subjectivities were also multiple, with artists from different social classes, naturality, races, genders, and sexualities.

It is also essential to Terra Afefé the relationship with the local community and the particularities which belongs to those surroundings. Beyond the exchange between the residents, the meeting with the artist Diones, born in Ibicoara, was a remarkable moment of Apaziá residence. Diones is one of the ecotourism guides of Chapada da Diamantina. At the time, has a self-taught artistic production that mainly involves painting, a high-esteemed medium in Art History written primarily by privileged bodies. Class markers go through Autodidactism, which means that while some are considered artists, others do not have the opportunity to occupy this place, either due to lack of study or non-insertion in a dominant system.

In that regard, Diones and Rose have a life story that converges, as both are Afro-descendant artists from the countryside of Bahia who get inspired by their own biography or from the collective stories of their places, and who seek to create cracks in the hegemonic art system experienced in the greats metropolis. Diones talked about how to tell stories (through the painting and the orality) is one thing that crossing him poignantly. However, it was evident in his speech, indirectly, the lack of a space in which he could self-assert as an artist. The absence of art schools or universities and any other spaces for dialogue made him doubt his own ability to "be an artist". Moreover, from belonging to a material reality that prevents him and many others from experiencing art as this possible place to inhabit the world, and for self-understanding, and self-expression.

Hence, for all the social impact of the existence of Afefé and the immersions that occur there, including Apaziá, the poetics present in this art project affects the world in its different practices and practitioners as if it were possible to say that, in fact, from diversity we live! 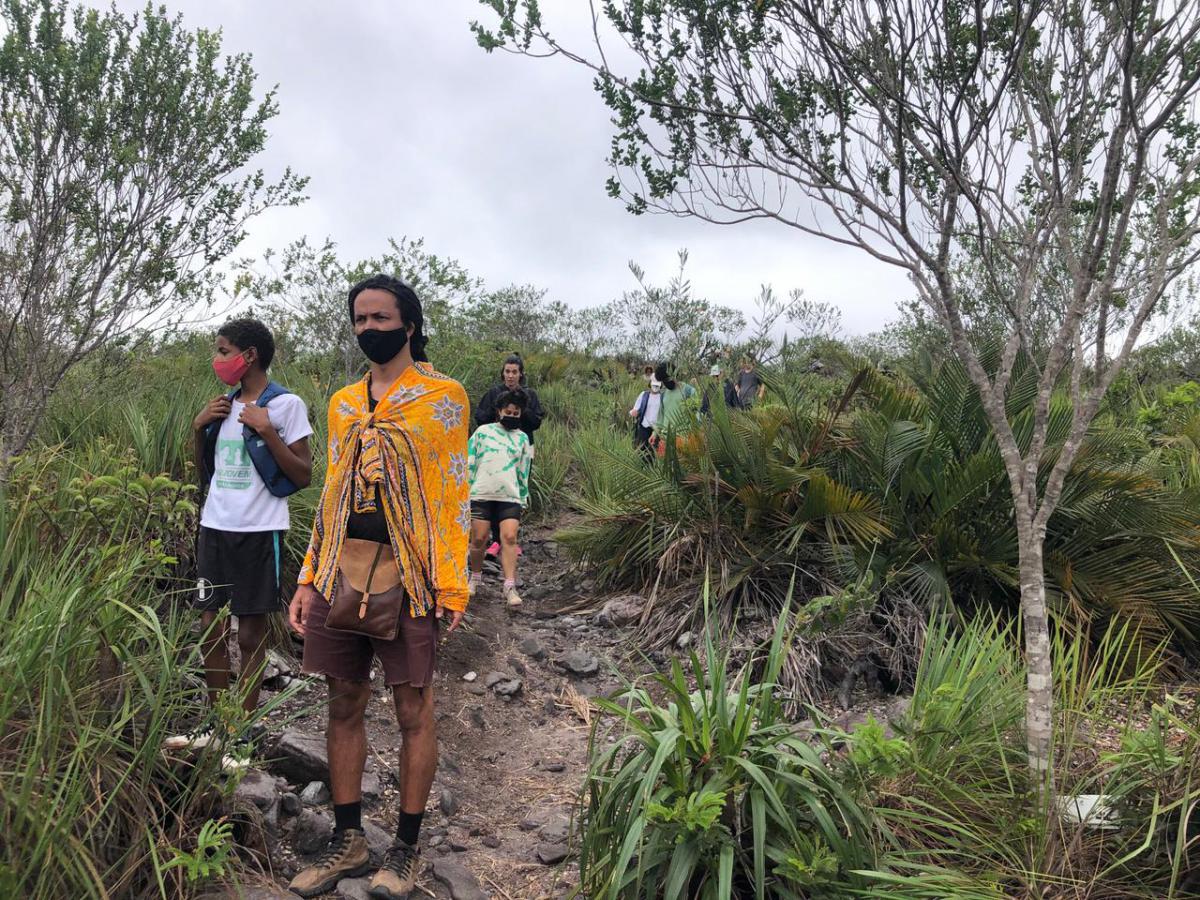 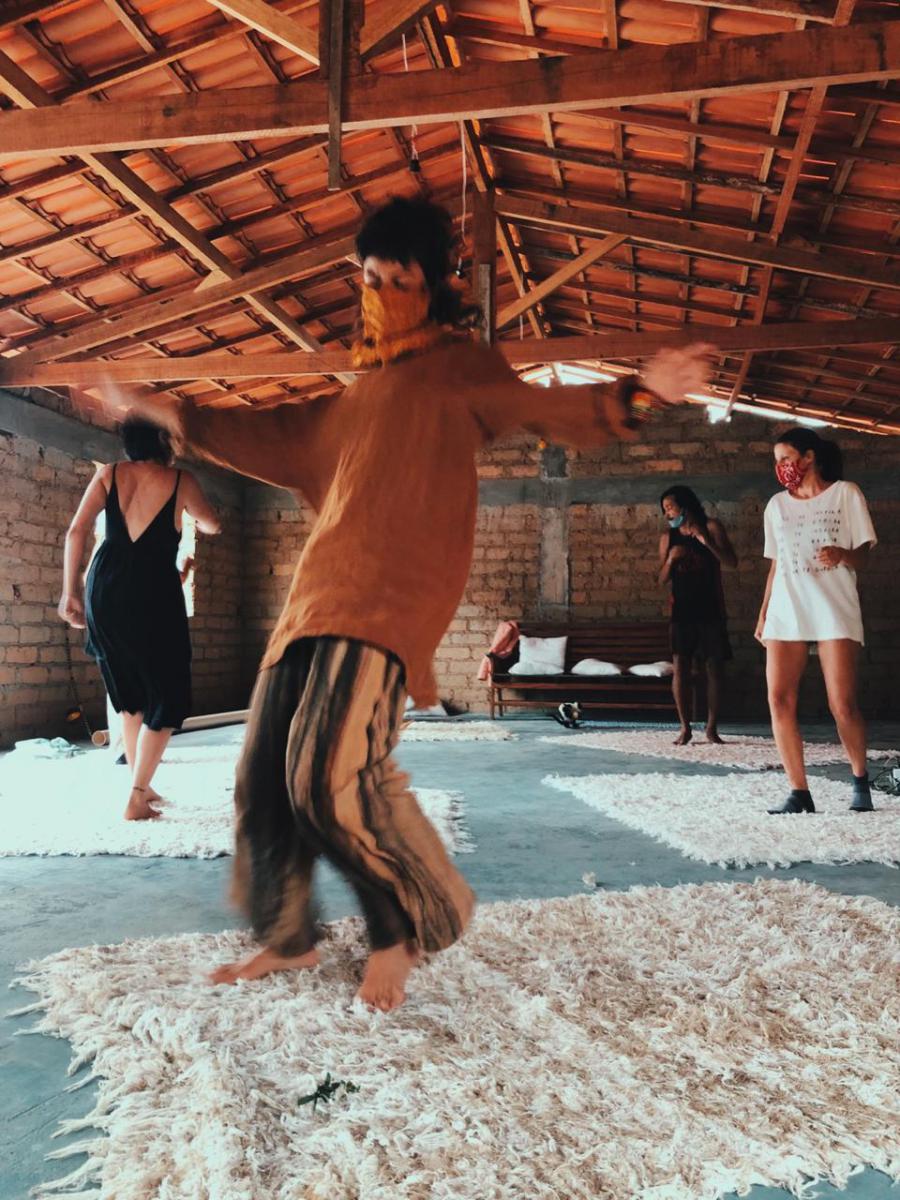 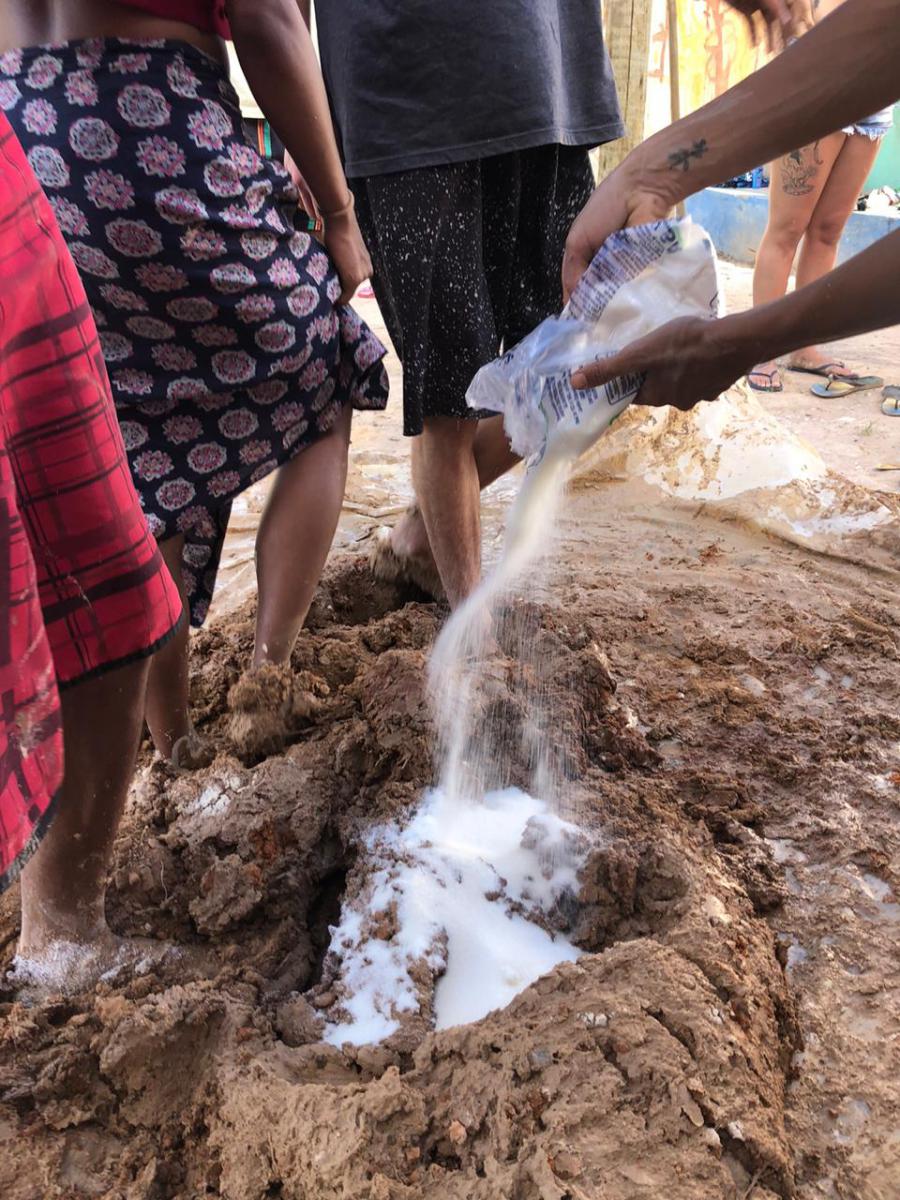 Activities carried out in Afefé: workshop on green building with mud and clay, conversation circles on residents' poetics; walks tours to attractions of Chapada Diamantina, and collective actions with the bodies

Bruna Costa (Rio de Janeiro, 1993) is an art historian, teacher, and curator. Bachelor degree in Art History at EBA/UFRJ, with an exchange to the University of Rome, Italy (Erasmus Scholarship EBW+ 2015-2016). Currently involved in a master's degree in Visual Arts, in the research line History and Art Criticism by PPGAV / UFRJ. She has research interests in Brazilian modern and contemporary art. Among projects realized, stand out the co-curatorship of “A título precário” at the Phábrika Cultural Center (2018), co-curated at the “1º Salão Vermelho de Artes Degeneradas” at Atelier Sanitário (2019), and curator assistance at exhibitions “Arte Naïf: nenhum museu a menos” (2019), “Campo” (2019) e “Hábito-Habitante” (2021), at EAV Parque Lage (2019). She is a tutor in the History of Art and Tourism at the Consórcio CEDERJ and teaches Art History free courses.

Paula Borghi (São Paulo, 1986) has a MA in History and Criticism of Art from PPGAV/UFRJ, and a BA from FAAP. She was the adjunct curator of the 11th Mercosul Biennial (Porto Alegre, 2018), guest curator of the Hellerau Cultural Centre in the Brazil Project (Projeto Brazil - Germany, 2016), assistant curator of the Ibis Habascal during the 12th Biennial de La Havana (Cuba, 2015) and curator of the Red Bull Station (São Paulo, 2013-2015). She was a co-idealizer for the Saracura independent art space (Rio de Janeiro, 2016-18) and idealizerfor the travelling library for publications by latin-american artists, MULTIPLO Project (2011-17) awarded by Rumos Itaú Cultural in 2015-16. In the years of 2015 and 2016 she worked with the Goethe Institute in the project Games of the South, which had as its research main focus the I Indigenous World Games, Palmas. In 2020, she co-idealized Potência Ativa, having as its first project “Arte, Substantivo Feminino”, awarded in the curatorial open-call by Apexart, 2021.

[2] The original phrase of the Brazilian avant-gard is ‘from adversity we live’, written in a work of art called ‘Parangolé Cape 12’ (1965).