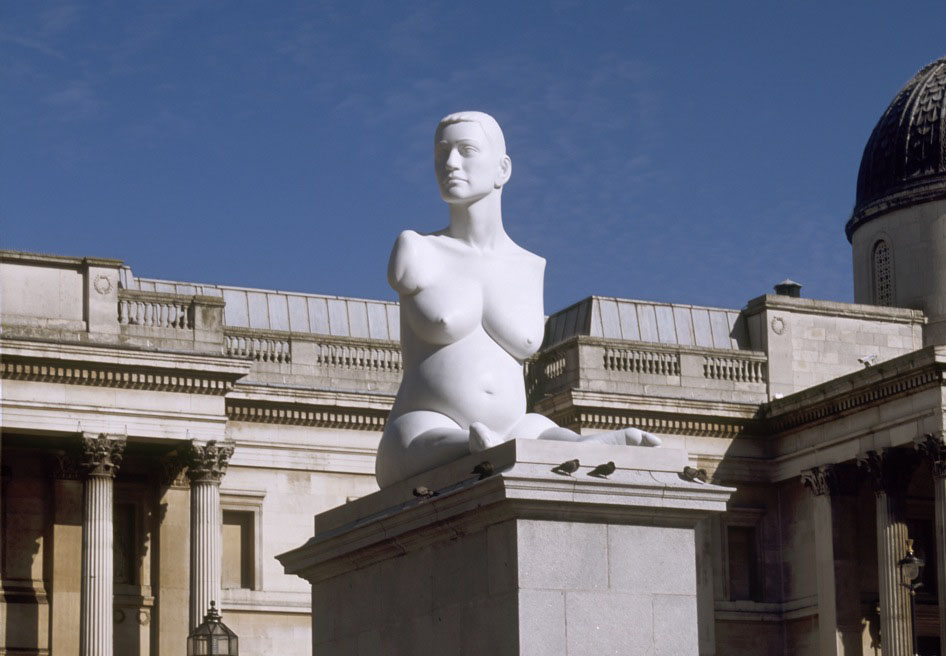 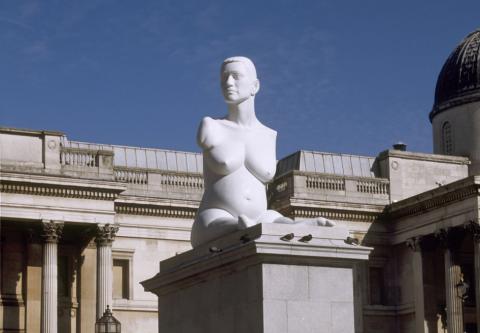 For human perception, it seems that the phenomenon of pregnancy is the most compelling externalization of inner mystery. It is the definition of visual proof of something invisible. To put it in the, heuristically very helpful, Peircean terms, the very evidence of ‘reproduction in spe’ is our most exemplary experience of the tight cognitive -and necessarily temporal- relationship between icon and index. In cultural-communicational practices such as religion, medicine, and art, the representation of pregnancy is already a double metaphor, or a metaphor of a metaphor, since carrying the meaning across another conceptual register at the same time means transferring and transforming, within one’s body, another life, a new body.

In the works of public sculpture discussed below, a commemorative statue, a “monument to the future” and a failed tourist landmark, this relationship gets involved in the current representational politics of the biological – and its limits.

A commemorative statue of the Guadeloupe revolutionary La Mulâtresse Solitude (c. 1772 – 1802) by the artist Jacky Poulier was placed on Hérosaux Abymes Boulevard in Guadeloupe in 1999.(IMAGE 1). It is said that Solitude, the woman depicted,survived the battle of May 28, 1802, on the side of Louis Delgrès, against the reinstitution of slavery by Napoleonic France, and was imprisoned and hanged by the French. Since 2007, the French State also officially commemorates her with a statue by Nicolas Alquin, made of iroko hardwood, placed in the Hauts-de-Seine in the Paris Region. Less than a couple of months ago, on September 26, 2020, the Mayor of Paris and the Paris Councillor Delegate in charge of Overseas Territories, announced the installation, in the near future, of a statue of Solitude in a city garden named her within the Place of Général-Catroux in the 17th district of Paris. 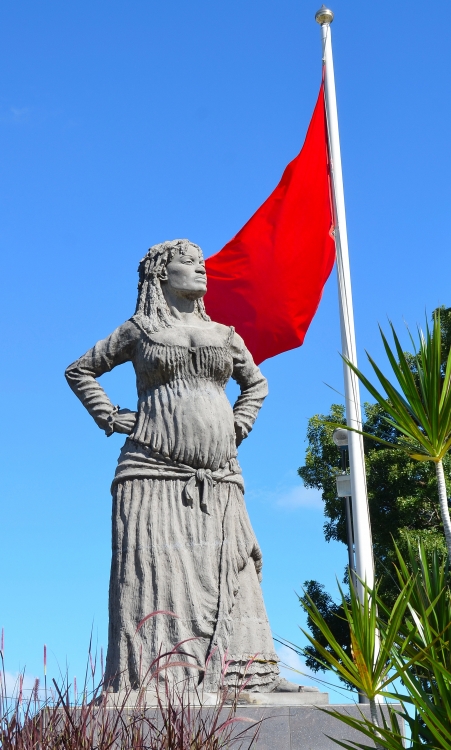 Turning to the concrete aspect of the image in Guadeloupe, where the content meets the materiality of the statue, one cannot help noticing that this is first and foremost the representation of a pregnant woman. The figure’s protruding belly becomes a mnemotechnic aid for the narrative attached to the monument and enhances the monument’s ‘semantic output’, which is pretty straightforward: Because she was pregnant at the time of her incarceration, Solitude was not to be hanged until November 29 of the same year, one day after giving birth.

The installation of a statue of an anti-slavery and anti-colonial fighter symbolizes the positive restoration of political memory. Its installation can be seen as the dialectical opposite of the ‘negative restoration’ of memory that is still going on today, exemplified by the recent defacement, “creative destruction” and ritual pulling down of Confederate statues in the US, and of other monuments, such as those of Edward Colston, Piet Hein, King Leopold II, Winston Churchill, Christopher Columbus, or Indro Montanelli, in Europe.

The statue of Solitude is meant to be, first and foremost, a traditional monument. The Guadeloupe statue is unusually “classical” in the sense that it is formally conservative and programmatically connected to time, space and a specific event, and indeed celebrates its very groundedness and immovability. Besides forging a material occasion for remembering a specific moment of global anticolonial struggle, it also pays homage to a certain kind of social realism in public art.

It is a monument hailing from the early museum era of historical commemoration: Contrary to modern public sculpture, which Rosalind Krauss described in her 1979 “Sculpture in the Expanded Field”,[1] and also in spite of today’s hybrid artworks-cum-monuments, it does not present itself as an autonomous and dramatic intellectual enigma. It prefers to remind people of something that happened on, or near, that very spot,with the intention to show respect to the commemorated events and maybe even allow them to happen again, by renewing their terms. However, the sculptor Jacky Poulier does utilize a modern compositional technique to enhance the veritability of the statue: Sarah Jessica Johnson has noted how he “figures [Solitude] in realistic detail, as if she might have been carved from a model or the photograph of Solitude that does not exist.”[2]

2. Quinn’s Lapper: a vision of nobility

The statue of the 8-month pregnant artist Alison Lapper, on display in London on Trafalgar Square’s Fourth Column from 2005 to 2007 (IMAGE 2), offers a very different approach to public art. It exemplifies the recent trend of public commissions of works that are primarily conceptual and not necessarily commemorative, and until a few decades ago would be seen in a gallery.[3] Both Ann Millet-Gallant[4] and Rosemary Betterton[5] agree with the artist Marc Quinn himself[6] that his statue challenges, criticizes and reformulates monumental prerequisites. Indeed, Quinn seems to have used conventions of commemorative public sculpture -the whiteness of crystalline marble, the realism of life-size physiognomic fidelity, the glorious pose- in order to create a truly unconventional work. In evoking Greco-roman sculpture to depict a disabled pregnant woman, “he invites us to consider whether a bodily ideal that is readily accepted in the limbless and fragmented classical statues in the British Museum can be recognized in a ‘real life’ figure.”[7] 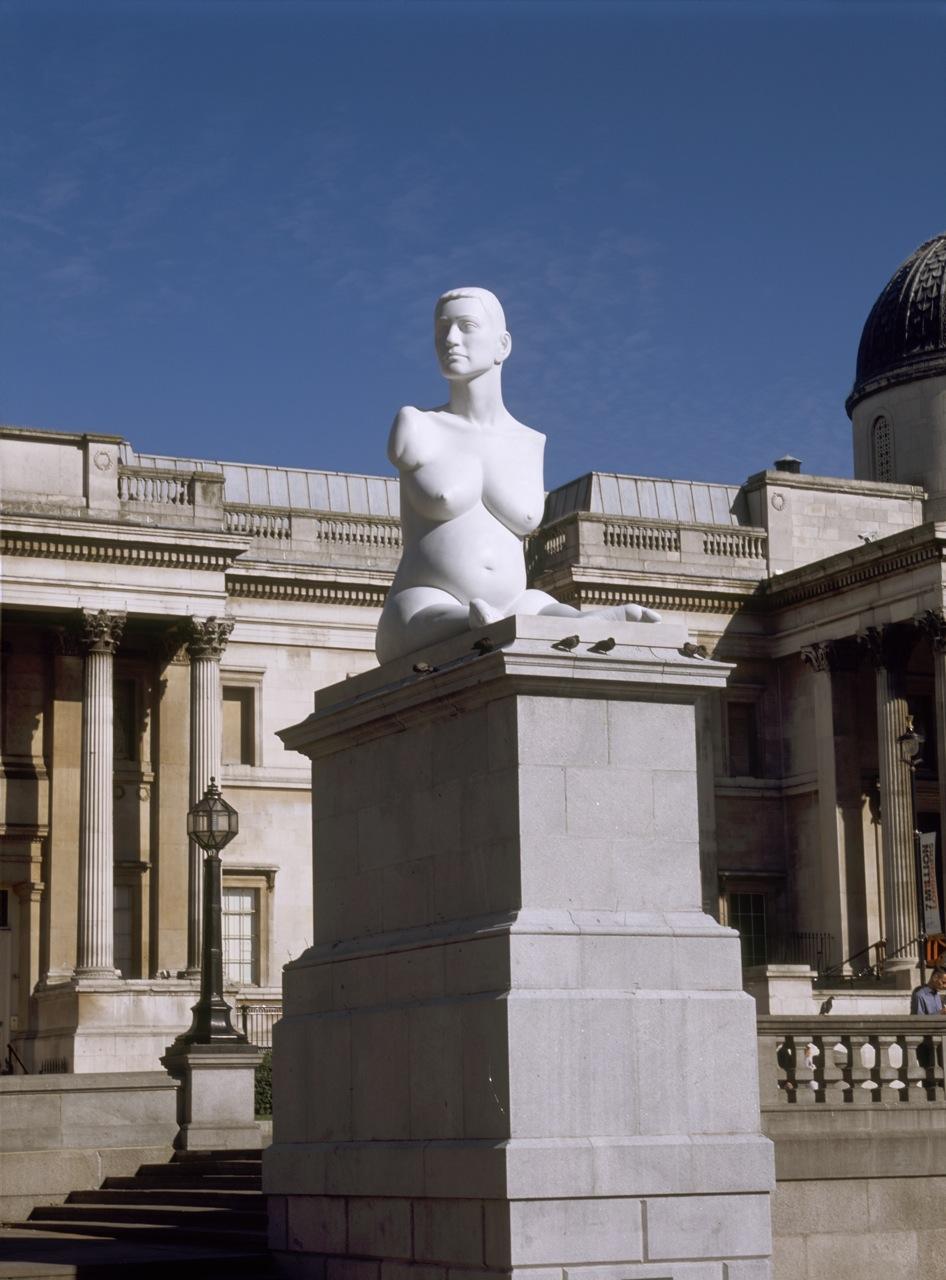 Impressive and controversial, the statue definitely left its mark. A reinterpreted version of it was presented at the London 2012 Paralympic Games opening ceremony. In a sad and sardonic twist of fate, this “monument to the future”, as the sculptor himself called it[8], the son of the portrayed artist Alison Lapper, born a month after her statue was made, died in 2019 of a “suspected drug overdose.”[9] The mother connects her son’s psychological problems and subsequent death to the fact that he had been “taunted by other children at school because of her disability.”[10] Sometimes, the greater the power of the “politics of representation” -of a critical artwork, of a radical monument- the deeper the horrific social realities it addresses.

3. Hirst’s Verity: Warcry of the undead

Cultural tourists and passers-by at Ilfracombe, Devon (UK), are confronted with a physically much more imposing pregnant body (IMAGE 3): A 20.25-metre tall, stainless steel and bronze sculpture, half anatomical cross-section, half burlesque puppet, was loaned to the town in 2012 by the extremely successful and expensive artist Damien Hirst, and since then stands at the entrance to the harbor. 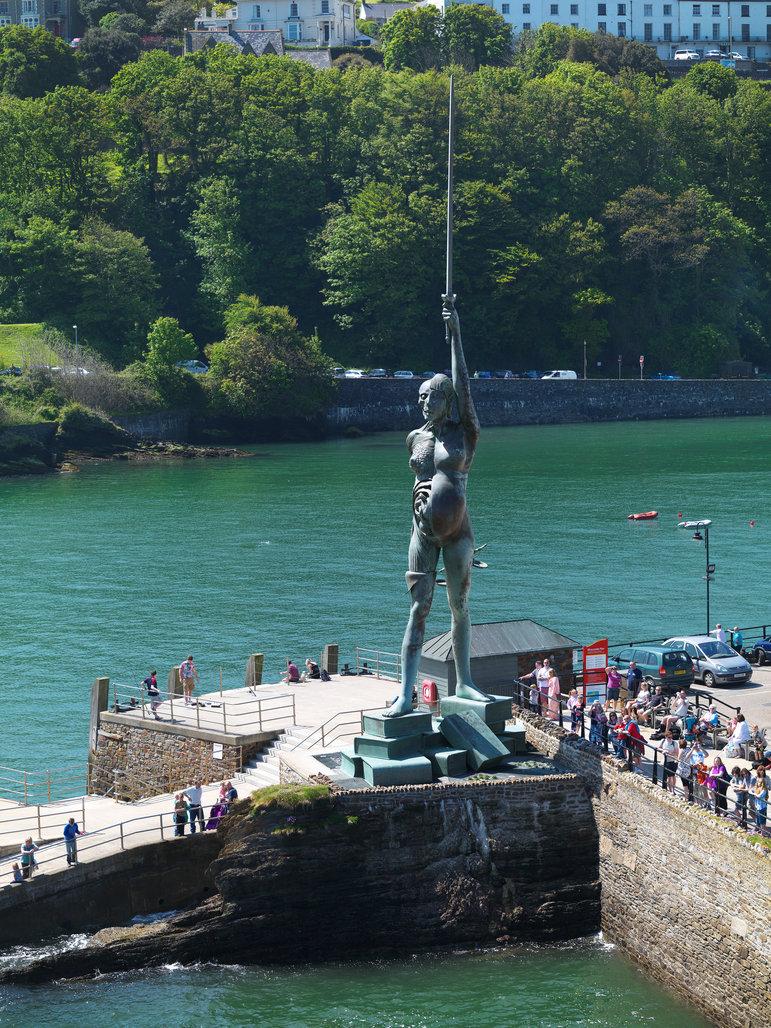 There is a simple yet unforgivable element in the semantics of the statue that immediately annuls its effort, all too obvious in its size, placement, material and formal qualities, to participate in the tradition of allegorical personifications, and even denies it its potential ambition to appear as an excessively bio-politicized Iustitia. This same element also renders aesthetically ineffective the effort to meaningfully distort the stylistic language of the “cutaway” Jesus[11] and turn it, from the purely symbolic insertion of the fully-grown child in the folds of Mary’s dress, into a mock-medical super-naturalistic deep relief of a foetus. In what cultural register could a person expecting a baby, an exposed foetus, and a sword, tell a life-affirming tale? Certainly not in public sculpture.

A huge 3D-rendering of a woman, “holding aloft a sword while carrying the scales of justice and standing on a pile of lawbooks,”[12]  but with her heavily pregnant belly slashed open, revealing the anatomical model of an unborn baby, facing the open sea of imperial Britain, invites associations with cesarian sections, with the volunteer surrogate mothers’ movement of wives of US troops, or even with neocolonial Britannia nightmares. As with most of the artist’s “science-inspired” works, its rhetorics are confused. Pregnancy here is being half-deconstructed as an anatomical event and half-drowned in the noise of justice paraphernalia. With its combination of medical grotesqueness and narrative megalomania, the statue categorically fails to embrace the sincerity of the monumental genre, and seems fitter to function as a prop for an imaginary retro-futurist zombie seppuku movie.

Especially today, when, in the face of ubiquitous war and thanatopolitics,critical voices across the globe are collectively questioning the messages of public monuments in a new historical explosion of critical iconophilia, and include the struggle for meaning within the general struggle for social justice, there is nothing interesting in a hybrid construct of soldier and mother.

Let us return to our initial observations. In the above representations of pregnancy, the iconic image of the woman and the indexical one of the belly suggesting the expected baby, stand in a conflictual relationship to one another. Solitude throws herself into the flames of anticolonial struggle despite her pregnancy, but fighting to protect her child from the prospect of slavery, Lapper poses for a heroic nude despite her dysymmetry and pregnancy, in order to reclaim both, Verity’s body is ready for battle despite the comically exposed foetus in her machine-like interior. All three figures -the emblematic historical figure of Solitude, the real-life visionary Lapper and the inflated kitsch object Verity- stand proud and brave. None of the statues show the woman protecting her abdomen with her hand, as dictated by the conventional pose of pregnancy ever since the late medieval representations of the Virgin Mary. Yet this conflict between pregnancy and extrovert engagement creates different symbolic images in each case.

In the case of La Mulatresse Solitude, one could ask, with Johnson: “Is the ‘defiance’ of [her] posture not rooted in the, otherwise vulnerable, act of a pregnant woman sticking out her chest and her belly?”[13]

Indeed, that is how Solitude becomes a symbol of political defiance, and of contempt for those who have written the history of victories, a modern monument looking back and reassessing the past. Alison Lapper is depicted holding anequally defiant stance in 2005 – reversing the norms regulating the cross-representation of disability, pregnancy and the nude. Unable to even describe the tension of pregnancy on a cognitively satisfying symbolic level -unable to make the metaphor work- Verity seems arrested in mid-air, hanging from some invisible wire of irrelevance, rather than moving ahead and carrying the meaning across.

If realist public sculpture somehow isolates the external outline of pregnancy and seems to accentuate its indexicality, (i.e. points to its reference to hope, generation and the mystery of creation), in the case of Solitude it tells a moving story of anticolonial resistance and forces us to remember. Quinn’s Lapper exploits classical representational modes of the nude and the bust in order to recognize the face of radical self-confidence. Both handle the sensitive neurons connecting politics and biology in a delicate manner. The two works, even though they belong to very different orders of making and understanding public sculpture, both celebrate life in the struggle for life. Their styles and their relationship to space, time and commemoration differ, yet both monuments are symbols of defiance and dignity. Verity on the other hand fails to make an open public statement, since all possible paths towards an argument or a story are blocked by an incoherent combination of antiquarian curiosity, military aesthetics and the maximalist naturalism of pro-life iconography.

[6] In 2002, Quinn talked of “using the weight of tradition to undermine itself”. Quoted in Betterton, Promising Monsters, p. 86.