The connection of disconnections. A reflection on Marcelo Forte’s artworks production during confinement | SOTTOVUOTO 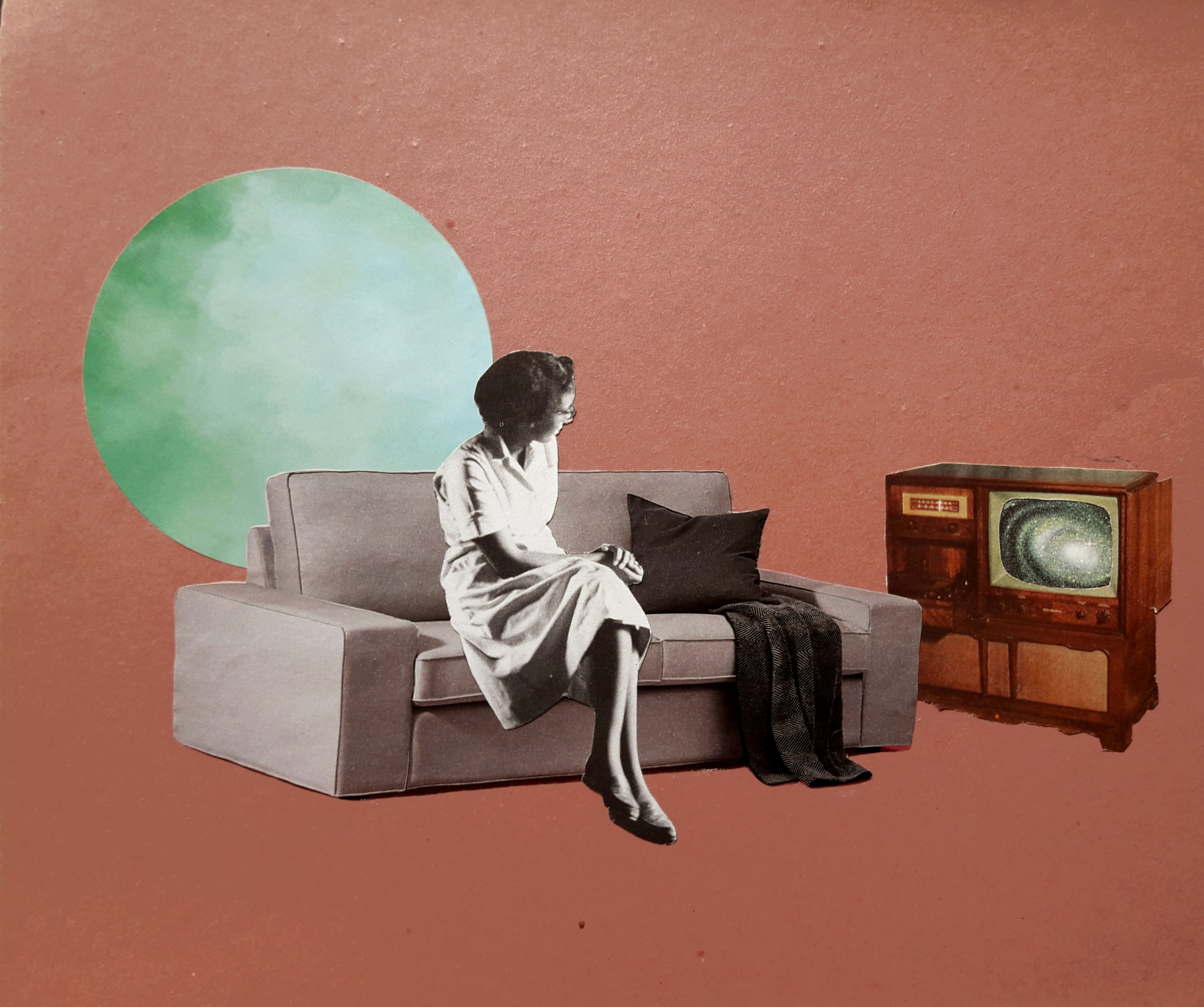 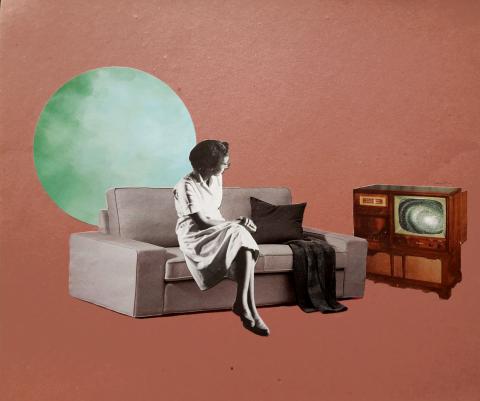 Marcelo Forte is a Brazilian visual artist who currently lives in Portugal where he is pursuing his post-doctoral research in Fine Arts at the University of Lisbon. As a practicing artist he was asked to participate in Sottovuoto, a curatorial digital project which aims to give space for artists during times of quarantine. During his confinement, Marcelo did not stop producing art, he instead worked upon the exceptional condition he suddenly found himself living in, and commented:

“In the last few months, my artistic work has been occupied by the issues that permeate this pandemic and, above all, social isolation. I started to think about how I could bring attention to the world of possibilities that we have while confined at home. The actions taken by the people in the images are commonplace, but because of the moment we are living in, they are essential for us to stay healthy”.

Marcelo works with the configuration of interior landscapes through different techniques such as collage and drawing, as well as through the intervention of materials found in abandoned houses during his ongoing project Desbravamentos. Due to its nature, the work of this Brazilian artist acquires special relevance in these moments when human intimacy must be rethought. During quarantine, Marcelo has used collage as a vehicle to generate an internal narrative that resonates with our own everyday situations. Collage and drawing form a continuous line in Marcelo’s practice amongst the magma of the diversity of materials with which he works.

The following texts represent the thoughts from the curators of Sottovuoto on Marcelo’s artworks and the narratives his work conjures. 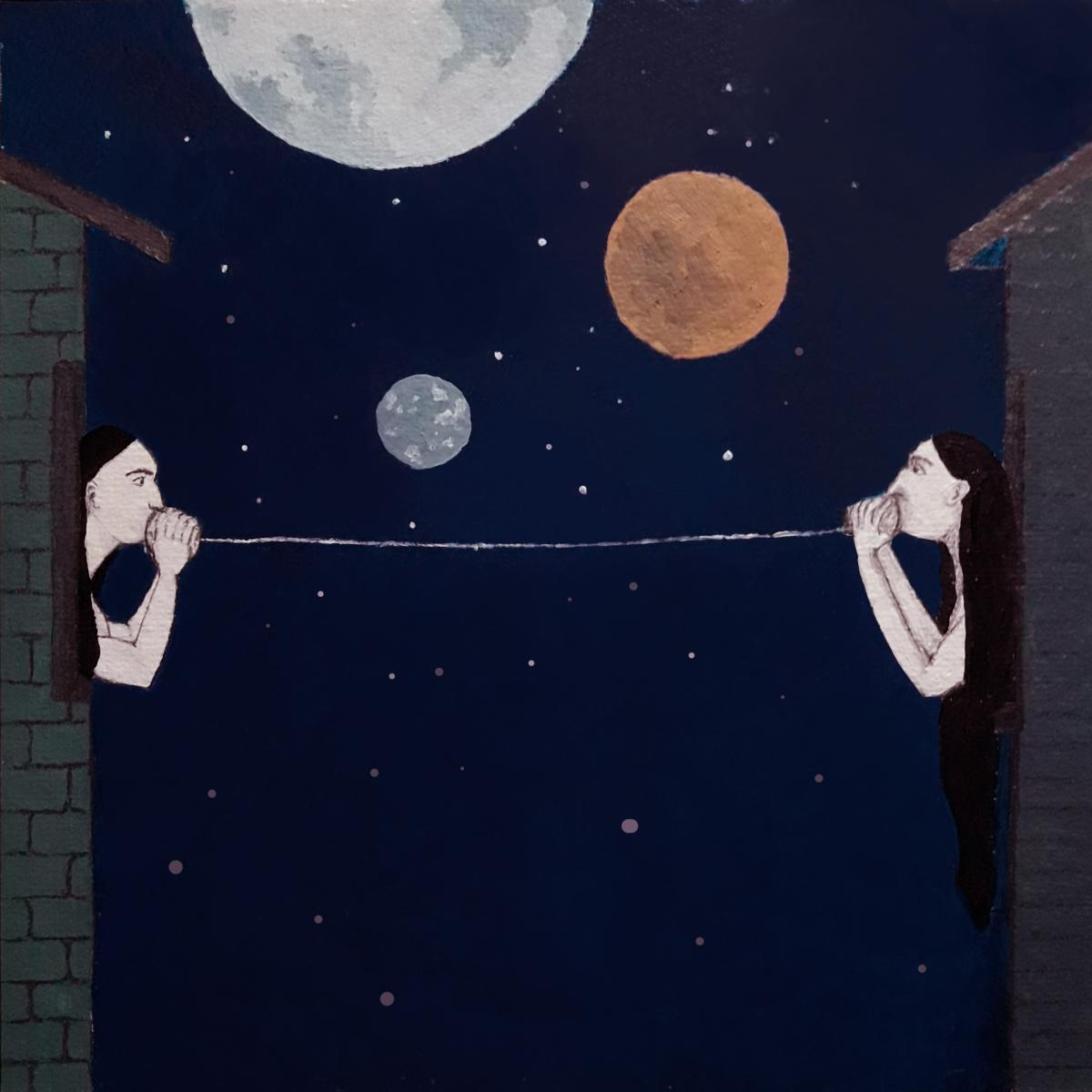 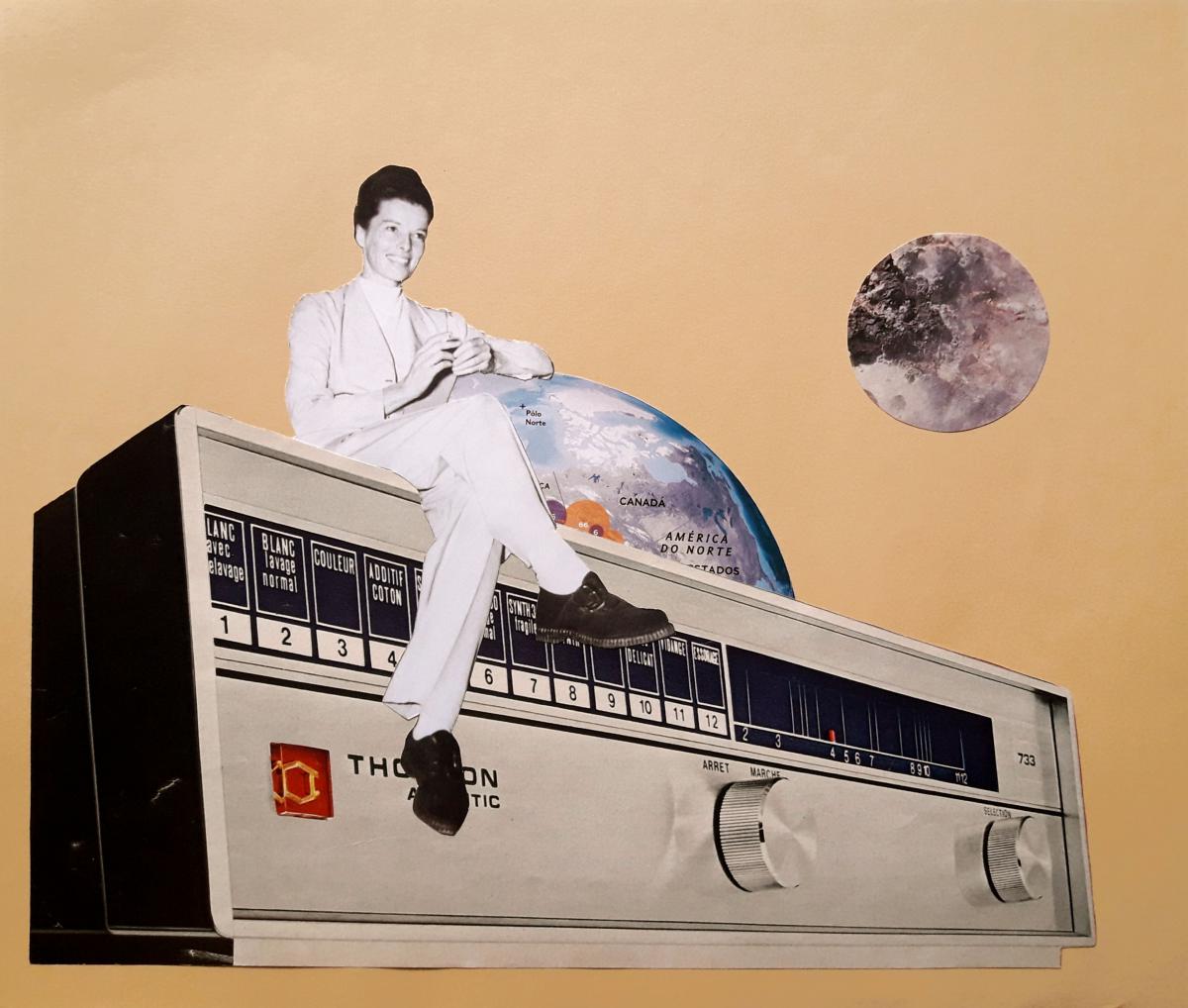 Marcelo’s work creates an atmosphere of spatial dreams, acting as an invitation to participate and explore personal stories. This work depicts its title Falamos ao Mesmo Tempo (Two People talking at the Same Time) [fig. 1] through two pale figures who seem to talk at the same time, connected by a fragile line. The background presents us with an infinite space that brings our attention to the possibility of exploring different worlds through our imagination during this confinement.

First sight of this work calls to mind the term extimité (extimacy) coined by Jacques Lacan.  The term proposes that what is further draws even closer, what is exterior exists in the interior. Marcelo’s painting shows that even when we need to be distant there is something that pulls us closer to each other, a relationship bound by imaginary lines representing our connections in the virtual world. Extimacy goes beyond the contradiction of “further” and “closer,” it also encompasses what is both strange and familiar at the same time, drawing attention to the complex relation between intimacy and extimacy. During quarantine, the future seems impossible to grasp – though we are living in these times we perceive them as far away and unknown to us. It is a point that converges and diverges though intimacy and extimacy, a push and pull contained in the tenuous line drawn by Marcelo.

A woman sitting on a radio. Is it a radio? ‘BLANC normal lavage. Couleur.’ They certainly aren’t the usual buttons on a radio. They are the programs of a washing machine. It’s an old one: Thomson Automatic. At first glance of Descobrir conexões [fig. 2] it is easy to mistake this for a radio, as the artist revealed he also did as this detail originally went unnoticed by him. Marcelo embroiders stories from the memories evoked by the objects with which he works. He has imagined that the ideas of this woman had formed not while the radio was playing but while listening to the noise of the washing machine during confinement. 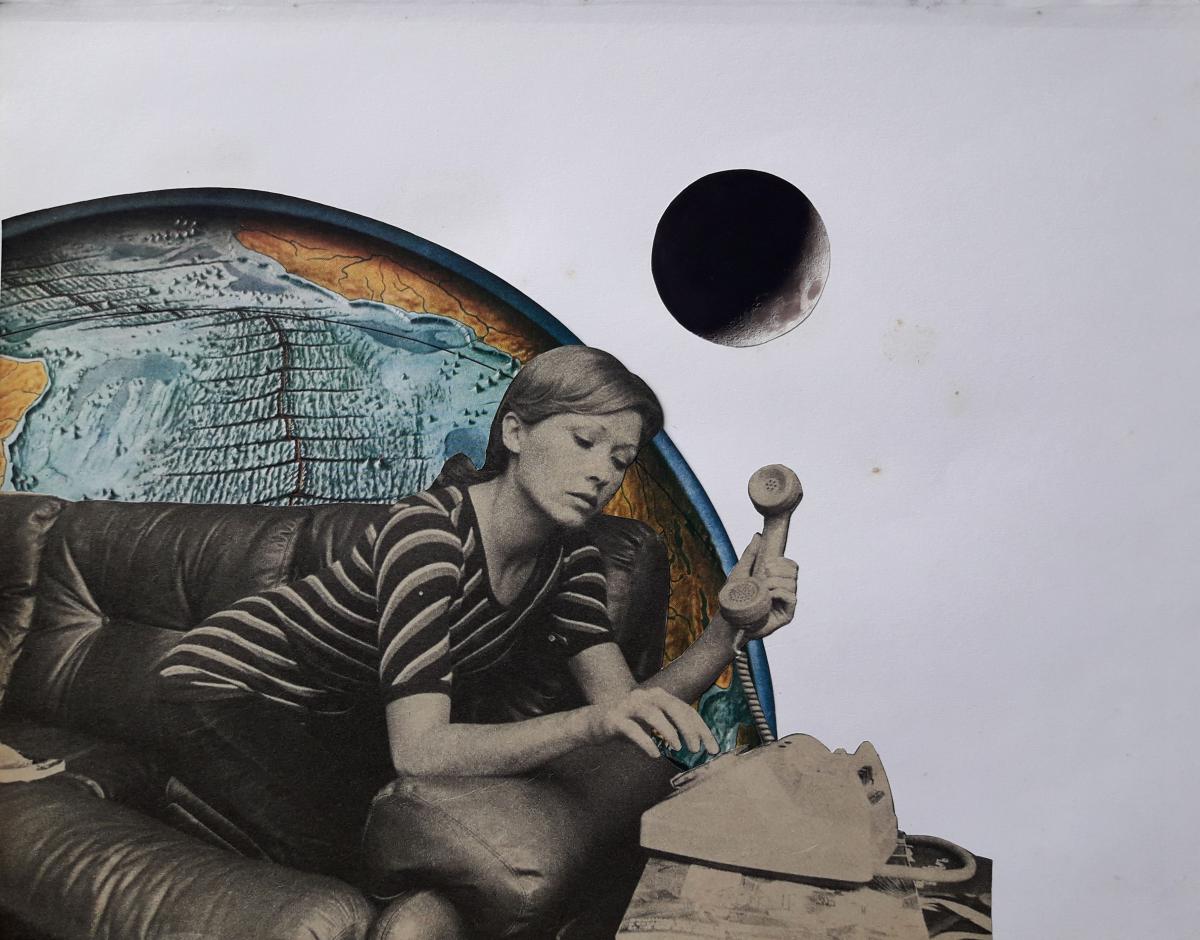 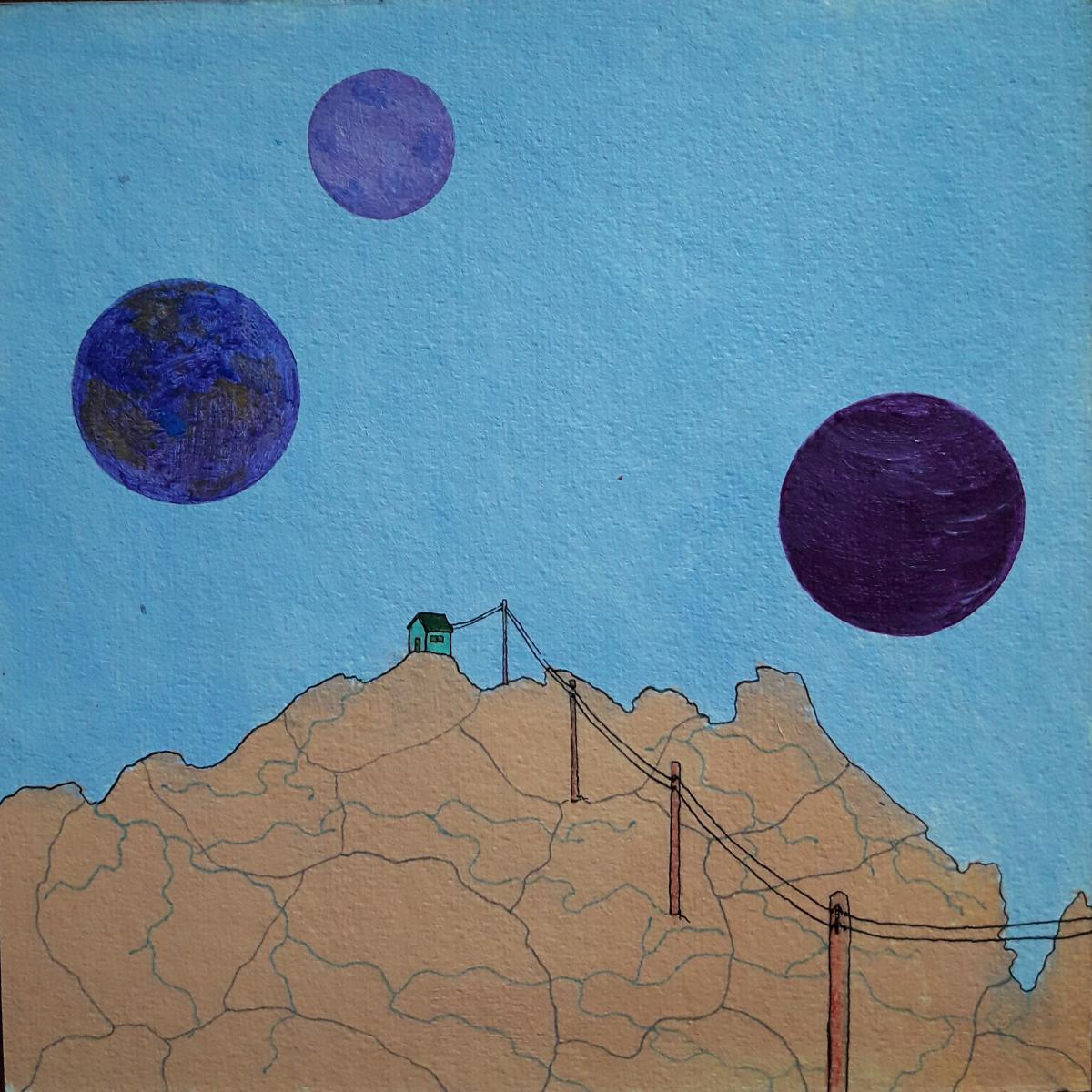 Radio or washing machine, the device acts as a background noise generator as the woman spins her thoughts through the soundscape. We no longer live by the rhythm of the clock, no commitment to punctuality: life flows with the rhythm of ambient sounds.

And it is all those noises – the coffee maker, the washing machine, the wind, the open tap – that make up a cushion of sound on which our thoughts flow more calmly, making it easier for us to listen to our bodies. All this contrasts with that silence that we imagine exists in outer space, between the stars, and that seems to infiltrate Marcelo’s collages with their planet-maps. It is not an ethereal, crystalline, empty silence, but a domestic silence in which the curtains are heard in the wind, the shuffling of the feet, the clink of silverware or the door of the fridge. And it is these planets-maps that unfold universes that are not infinite and endless, but are within reach of the skin. They are intimate geographies that we can always travel to, even when all borders are closed. Descobrir conexões. Discover connections – the title of the collage. Discovering connections in the distance, in our own skin, in solitude [fig. 3], in the company of other bodies that we inhabit without being able to keep them close. We feel the words that Simone de Beauvoir wrote and we repeat them in our minds:

Because when we discover that care occupies a central place in life, that it bears weight, that it occupies time and space, that it is not light and that it should never be invisible, then we can also discover connections from a distance, connections to occupy worlds, Conexões para ocupar mundos [fig. 4]. 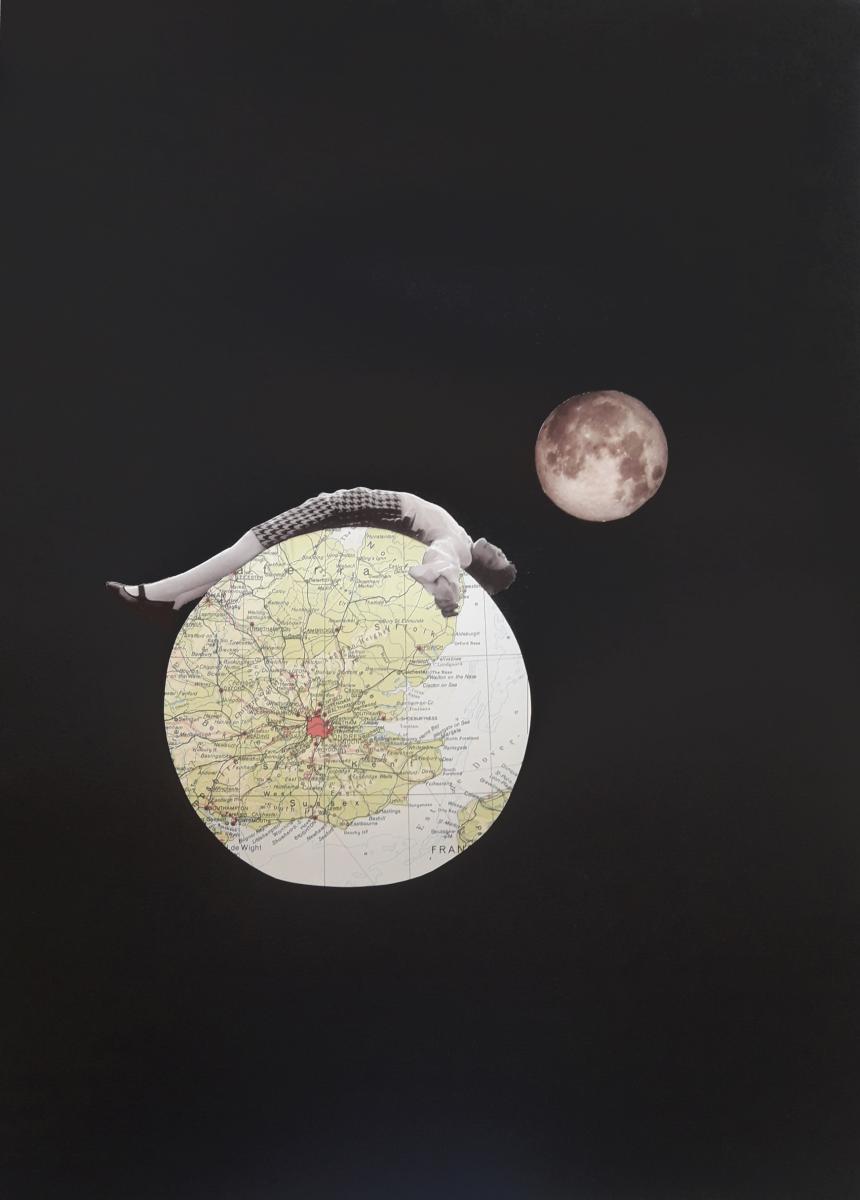 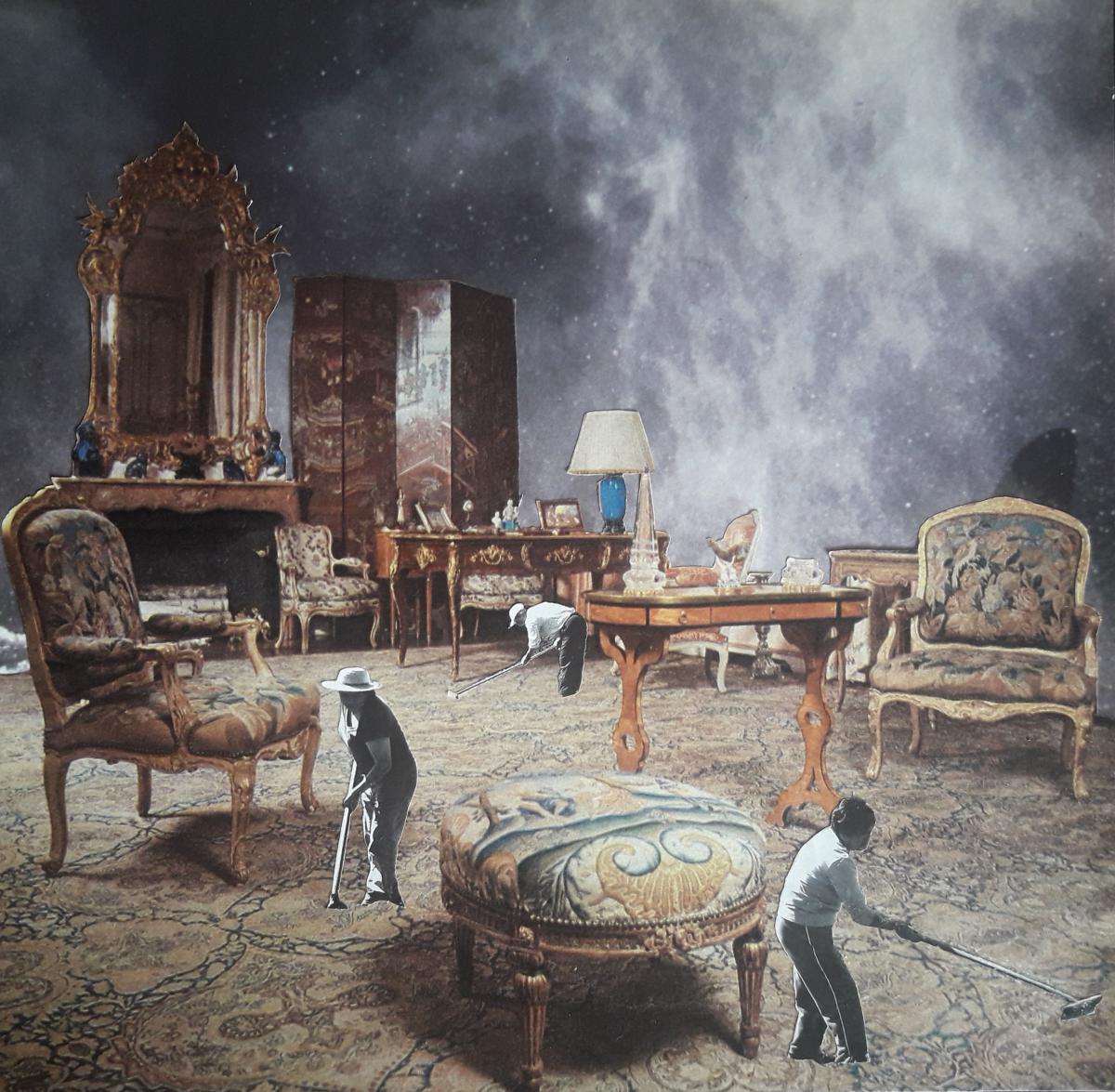 How does solitude interact with the domestic space? In Marcelo’s A solidão e um mundo de possibilidades [fig. 5] we close our eyes, we lay down on top of the world, hanging in the void as we are left in the dark. A source of light to break this blinding darkness: the moon. The feeling of timelessness. The accuracy of silence ruling the days. In between the past and the future, we become accustomed to living in a state of weightlessness.

We forget verticals and horizontals. Natural laws no longer apply. In solitude we live in a world of possibilities – referring to Euguène Ionesco’s concept of solitude, or isolation: “Isolation isn’t absolute solitude, which is cosmic; the other kind, the little solitude, is only social”[2]. We play with space as Georges Perec suggests to when he says we “cause an eclipse of the sun by raising our little finger (as Leopold Bloom does in Ulysses)”[3]. We can connect with outer space, our mind and memories breaking out from the walls which surround us. Does the universe actually come from the “inside”?

We can open our eyes, wake up and invent tasks for ourselves. Par aqui há muito o que fazer [fig. 6] – there’s a lot to do here, in our domestic space. This time, not ourselves but an entire room is floating in the universe, becoming its own star.

Once again no walls, no boundaries. Our living room expands – or are we shrinking? The sense of scale of a familiar place or space mutates. A living room is no longer a living room. We now can rake the carpet inside our own domestic space. But what is “inside” after all, when a mirror is freely hanging in the air? And what is “outside” if we are using rakes on our carpet. Inside and outside begin to merge, to coexist in one space. The meanings of the objects are transposed; the idea of the room is altered. 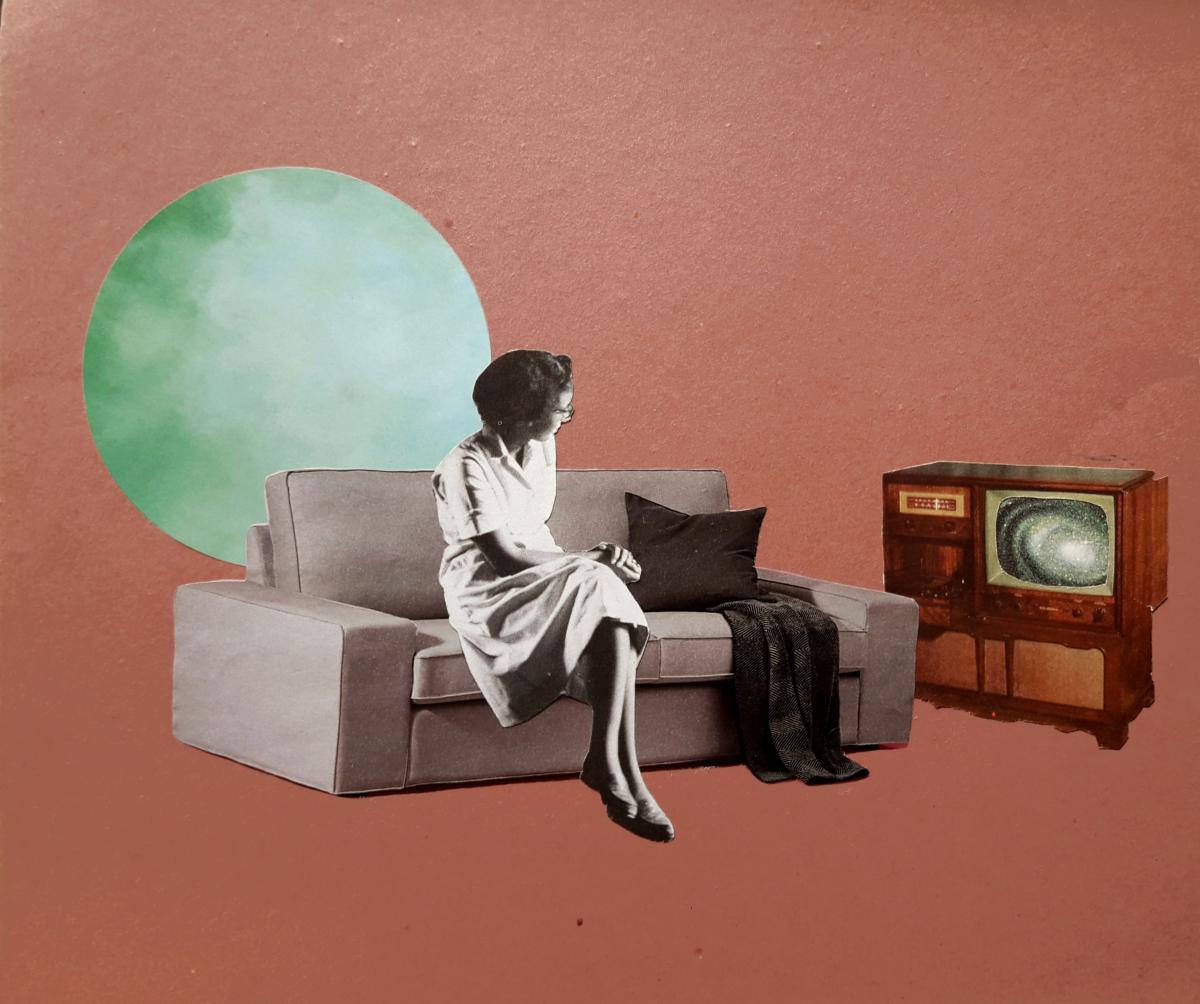 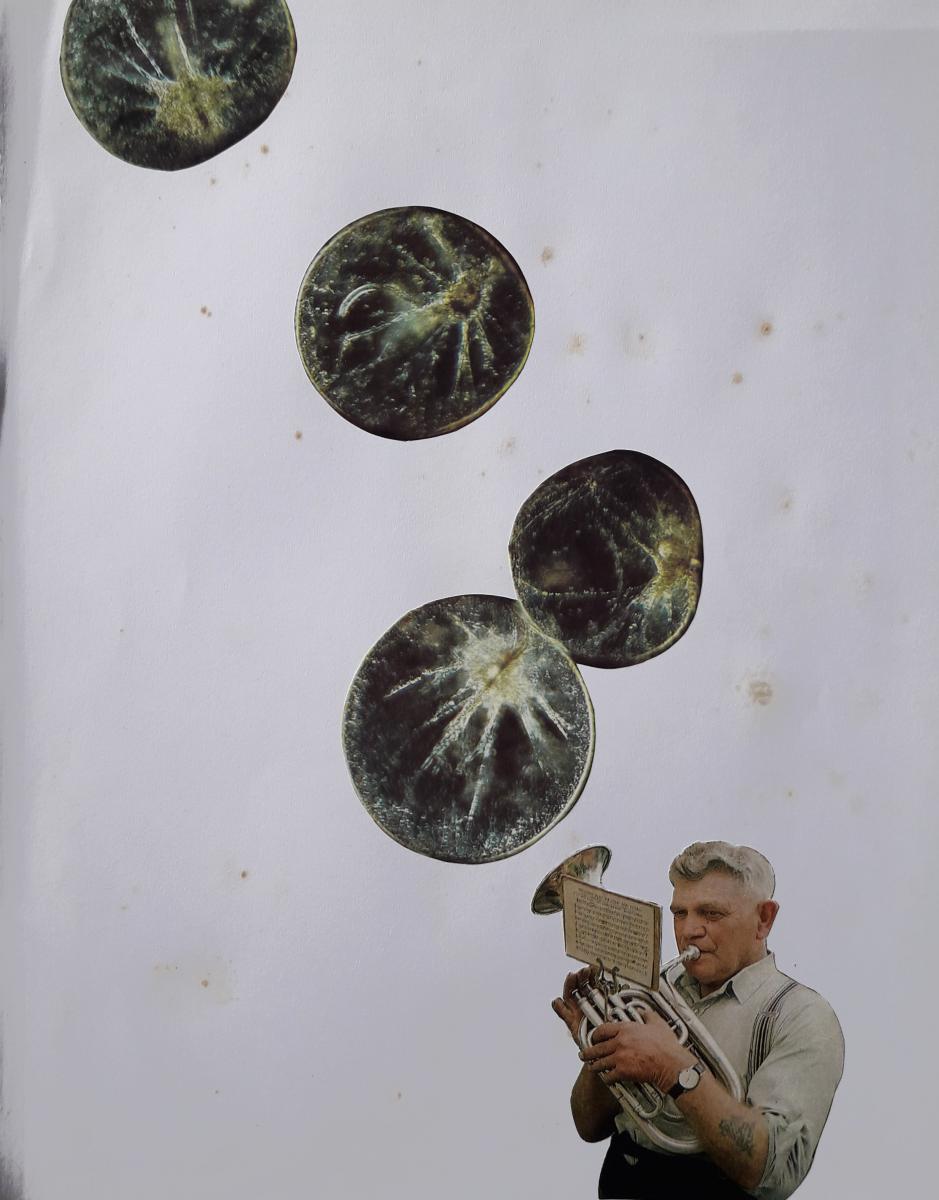 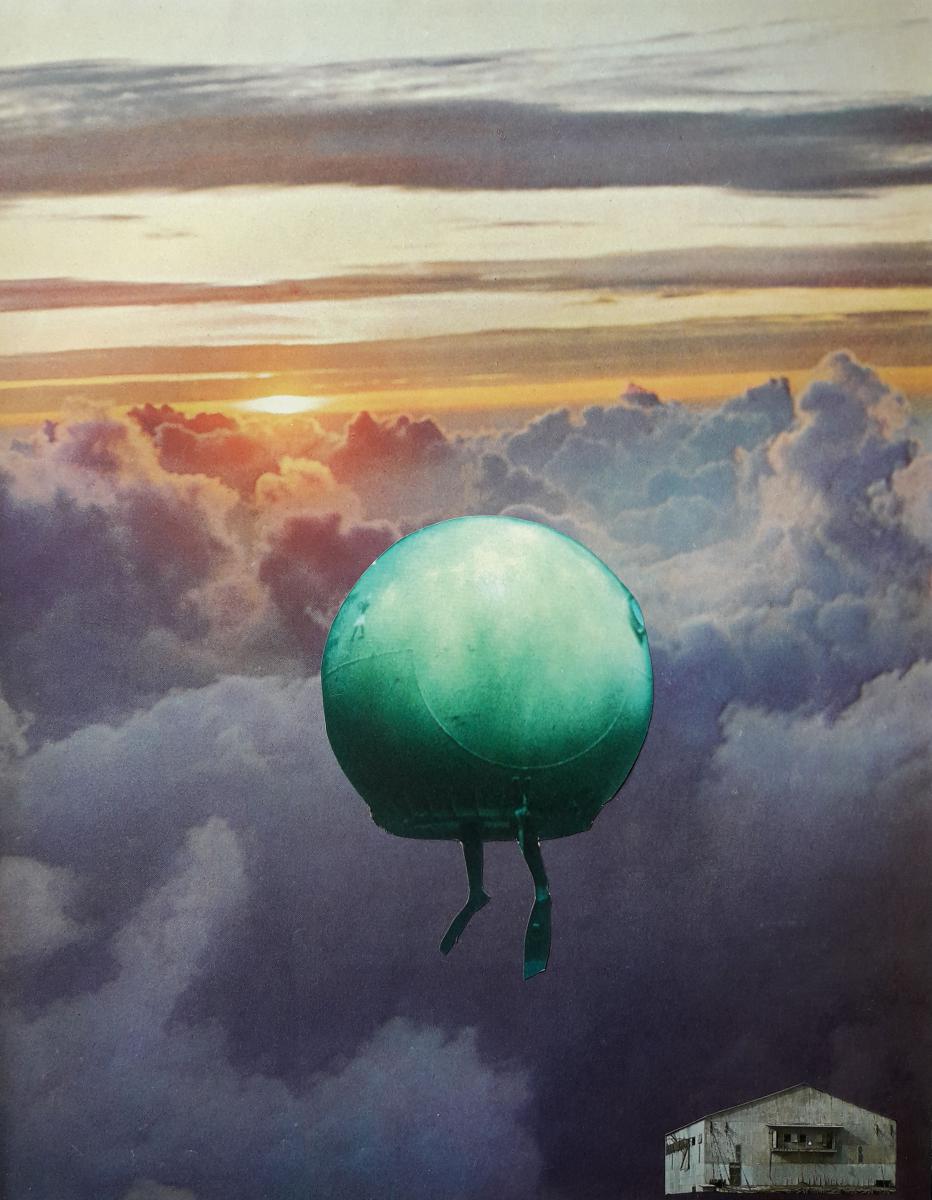 We interpret the surroundings and invent different narratives to occupy our seemingly endless time. Yesterday maybe there was a circus under the chair. Today we comb the rug. Tomorrow we will jump from one piece of furniture to another, because there won’t be a floor anymore. We venture into the unknown which begins to take a vaguely familiar shape. The outlines are blurry. We keep ourselves busy in the timelessness of our condition. We entertain ourselves.

Sometimes it seems as if we walk through the world inside our own bubbles, but maybe the world lives alongside us in that bubble. In our internal worlds we can touch the universe from the couch [fig. 7]. When we play music it is like cellular birth, a ricochet of new possibilities [fig.8]. Marcelo’s works act as maps of these dreams, these thoughts, as we explore the universe that exists inside our own rooms and minds.

They are a reminder not to feel trapped, as we can venture into the depths of our own ocean to break through the horizon of another hemisphere after we have tunneled through our planetary core. Marcelo’s collages combine aspects of domestic realism in ways that pull them out of time, out of space, leaving these quasi-fantasy images to exist in a vacuum, a blank slate which our minds connect and imprint on. Maybe we are like the diver in Sonhar Todas As Noites [fig. 9], maybe we need to keep ourselves in this solid bubble to be able to reach our own depths and heights.