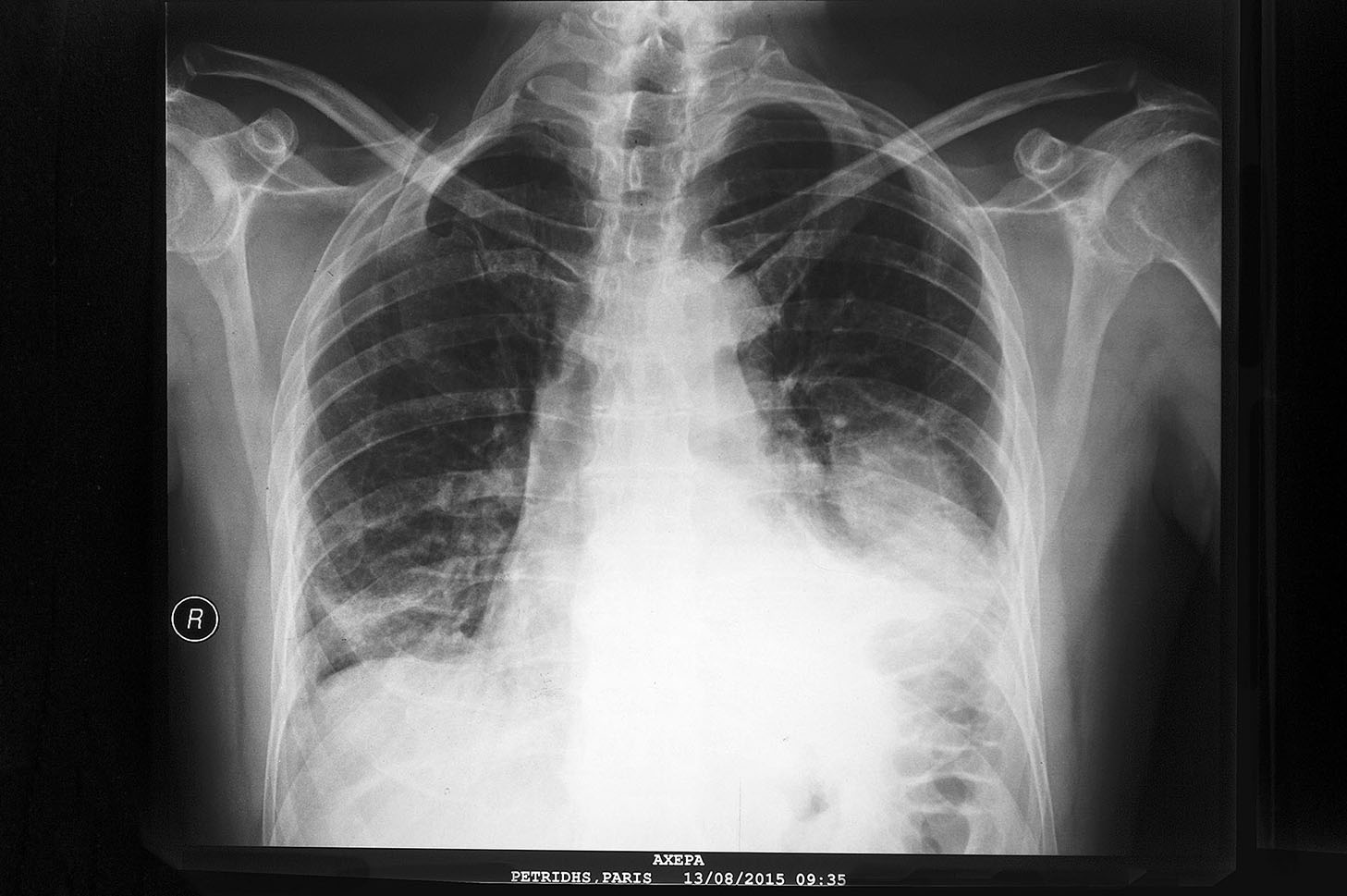 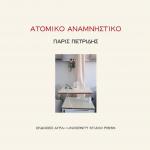 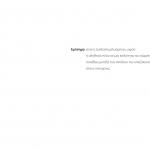 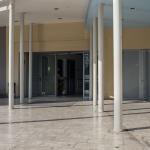 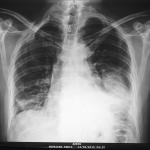 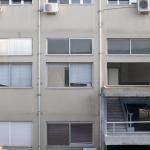 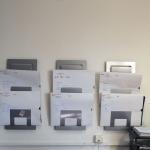 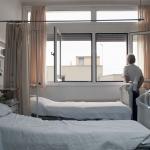 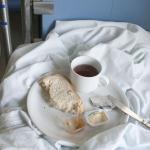 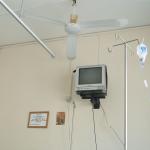 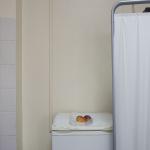 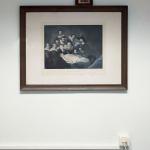 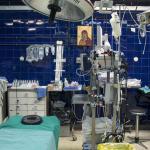 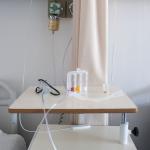 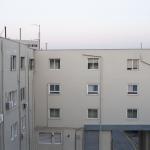 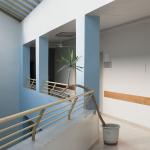 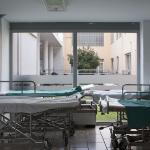 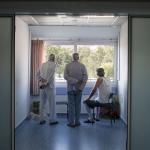 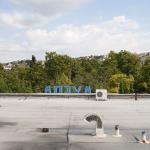 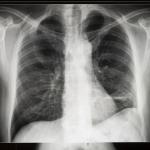 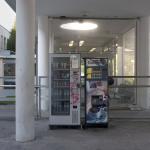 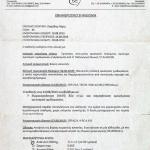 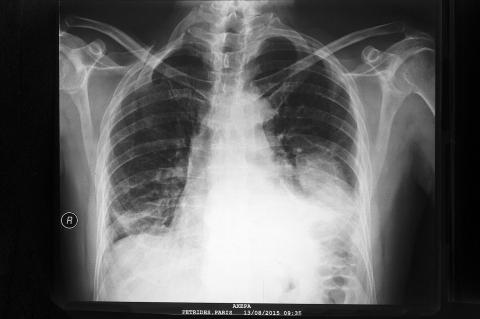 This is what I saw: The introductory Prelude is a transmedial game  unfolding over pictures 1, 2 and 3: The definition of the empyema (1) refers to the thorax-wall. It is followed by the walls in the hospital, where two rows of columns, or should we say a tectonic ribcage (2) lead us to the thorax X-ray (3).

Picture 4 introduces us to the main topic, Part A (the Sarabande), that deals with the relation of frame to screen: We look at (but don’t see through) open windows, closed windows, half-open, half-closed, transparent, covered windows, like eyes looking out, with their optic nerves represented by the waterspouts. If, for Baroque painting, the window is the original picture-frame, the hospital makes an ideal white cube, its bare walls creating a perfectly neutral exhibition support.

Picture 5 highlights the ergonomics of clinical semiosis: The documents of the printer, after being passed over a few times, are arranged in an upright serial taxonomy at eye level bearing random traces that confirm their utility. Picture 6 introduces the first patient-viewer (there will be three of them in picture 16). In picture 7 there occurs the first organic transubstantiation: The round surface of the beverage in the cup is replaced in the next picture (8) by the square television screen. The bread, the knife and the sheet are replaced by the swastika shaped by the hangers, the life-breathing trinity of the fan stalks and the cross that Jesus is treading on to conquer Death. Within the same sacred cliché of mortality in picture 9, a post-it note on the marble tile is asking: Did you wash your hands? Or do you assume full responsibility (requested in picture 8)? Looking at the three fruits and the drawn curtain one needn’t elaborate on the metaphor of temptation. Both poems (ποιήματα) and abscesses (εμπυήματα) feed on flesh after all.

Picture 10 is a Galanterie between part A (Sarabande) and part B (Gigue): It triumphantly condenses three out of the four dialectics that run through the whole work, namely: 1 the dialectics of figure and plane 2. The dialectics of color and tone, 3. The dialectics of sujet and medium. If we could take the intersemiotic analogies to their extreme logical conclusion we might see: The fourth dialectics, (the dialectics of inside and outside the body), is left out: The process is alluded to in the three sockets that are open and the one (a double socket) wed to a plug - one that connects the wires to the body.

The conceptual binaries of representation vs diagram and religious vs scientific image interlock with the analogue distinction between black & white vs color, a distinction ironically commented on throughout, with a b&w photo of Rembrandt's Anatomy Course and the color reproduction of a mass-industrial Virgin and Child. A transition from black & white towards color distinction is effected narratively through a tonal scaling, from the pale, grey-blueish geometries of the first landscapes to the color-saturated image of the operating room (picture 10). The second to last page, the hospital discharge note, refers to all incidental documents produced in the course of treatment, the soon-to-be junk data. Then we stumble upon the glaring final print, the sun-soaked vending machine with an ambulance in the background.

Then comes the body, in the transition from picture 11 to picture 12, from the lush to the simple, or, to put it in object terms, from the form of the Virgin Mary and all kinds of artificial eyes of protection and monitoring to the clock of the meter-face and the transparent indices of quantity, the cables and hourglasses.

The sequence of pictures 13, 14, 15, 16, 17 records a gradual invasion of vegetation. Often, in Paris Petrides’ photographs, random plants stand for abandonment and decadence in a pre-planned and fully built space. Here, with growing degrees of magnification, the small unruly indoor plant becomes a woody bush in the atrium on the next page, and, right after that, we see a row of trees in front of the building that finally morphs into a dense artificial grove shot from the terrace. Patients, the primary viewers of picture 16, lazily take in the view from the window, the primary frame of the marginally touchable. The unkempt, and therefore tenderly familiar, landscape, repressed and therefore functional, becomes a persistent trace of history. Hospitalization is a suspension between two worlds, it is supposed to lift the track record of the past and offer critical power to the present. Plants in hospitals are not allowed to grow too wild or get infested, they are being constantly sprayed and trimmed, in solidarity to the ailing human bodies in confinement.

In picture 18, the second X-ray print (third from last, as the first was third from the beginning) -the first was before, this is after the treatment- closes the curtain by leading us from the outside to the inside. What comes between them, in pictures 4 to 17, is shot from inside out, from the eye outward. The movement of light is thus established as the dialogic axis in the story, first as the scanning lens reacts to the shades of matter under the flesh, then as it captures the outer surfaces mimicking the synapses of the optic nerve. This dialectics of inwards vs outwards delineates the two main qualities of the image world today, i.e. extreme autonomy (images are always ready to migrate across media and divorce any original contextual meaning they have) and extreme processability (images can be manipulated, archived and compared on a massive scale, recombined and deleted in a wink). In this sense, radiographic penetration is the ultimate nature shot – which brings us back to the clinic: Drafting the anatomy, producing inner charts and representations are part of what makes medical practices scientific, and hospitals institutions of authority.

Besides an exercise in style, Patient’s Personal History is also a study of the binary concepts that shape the history of the medium: Original vs reproduction, black & white vs color, camera lucida vision vs peripheral vision, external documentation vs x-ray scan. Through these concepts, Petrides articulates his evolving approach to photography through a twist of fate turned into an artist’s privilege. Once in the hospital, he forced the curious and admiring gaze of the visitor on the patient's insecurity and abandonment.

There is certainly no room here for the vertiginous fixation of many photographers on the overpowering architecture, the prevalence of straight lines and cold symmetries of hospital environments as counterpoint to the incalculable tragedy of death. Nor do we hear –what a relief!- the echo of contemplation on some foucauldian heterotopia. Quite the contrary.

The artist himself might believe that he is merely saying: "well, incidentally, after traveling to Turkey, Israel and Egypt, I had to have an operation." What he delivers, though, is an almost cynically optimistic statement about a string of otherwise mundane affairs exploding under the membrane of the Everyday at the cardiothoracic surgery department of the ΑΧΕΠΑ hospital in Thessaloniki. Uncharacteristically for Petrides, historical references in this album are sparse, as if not to overshadow the underlying theme of the whole project, that is to say other hospitals. Until now, Petrides' existential motive in his albums has been the exploration of the historical coordinates in the scenes he produces. For this book he is only a few hundred miles away from the bombed underground hospitals in Syria or from the medical centers at the Turkish border camps, where brave surgeons from humanitarian missions race against each other to the offhand operating room, when, after days of inaction, work suddenly comes up, where casualties are prioritized according to a rough estimation of the patient’s status, perhaps their age and definitely their degree of survivability.

Petrides appreciates the luxury of his trusting resignation to the hospital. Given he has always been a photo-reporter from the field, the subtext of Patient’s Personal History appears to be the condition of non-war – indeed an opportunity to compose this rigorous Suite.