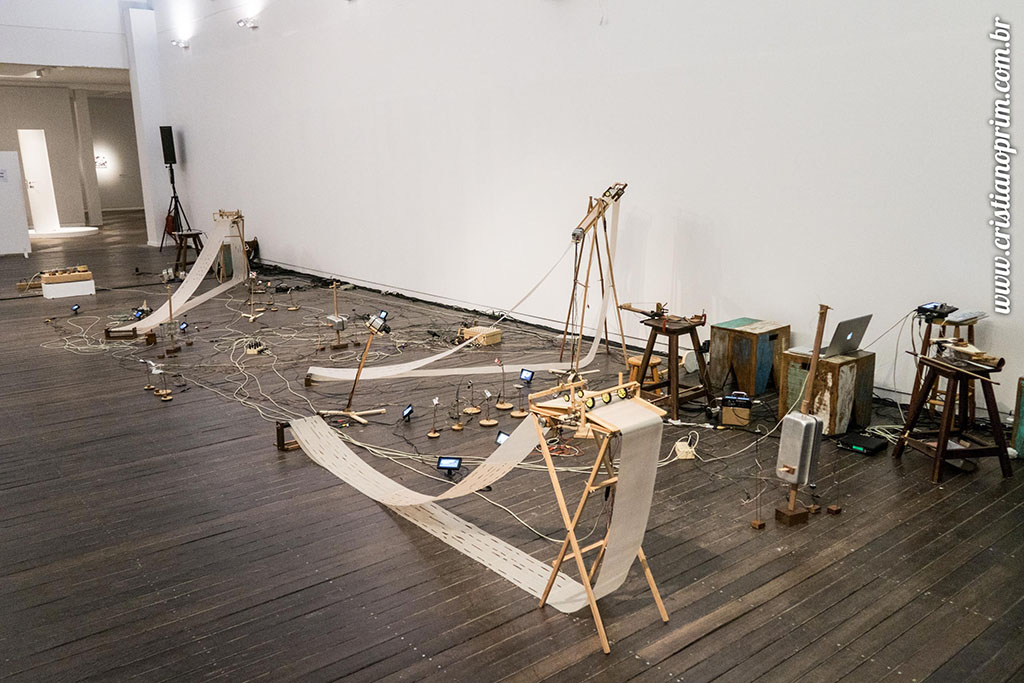 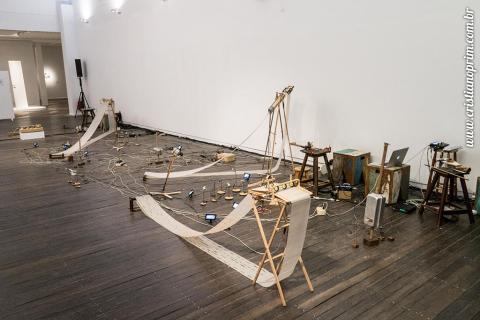 Orchestra Machine, this great mishmash, sprawls across the entire floor of the room. The exposed, misaligned wires form drawings, traces of a visual thought. Drawings that connect the sculptures – noise-emitting contraptions. This set of electronic-mechanical sculptures produces a refined dialogue between sound art and visual art. These handmade machines present complex, almost undecipherable systems, whilst also revealing recognizable objects such as a medication blister card, fragments of aluminium cans, cake tins, and other materials that emit sounds when engaged. A video camera system is also incorporated and reflects details captured from the installation on the screens. Through controllers and computers, the machines respond to signal stimuli that are organized within a programmed network. Three conductor machines read the information, perforated on graph paper; like pianolas, they determine the time and trigger this entire apparatus that is organized in analogue and digital channels.

When the artists are present, the machines respond to the stimuli of the eight hands. The duration of the performance is determined by the coils, that slowly unwind throughout the process. A musical texture is developed spontaneously, through interaction between the programmed and the unforeseen. The artists touch their instruments, paying attention to the whole setup and the reverberated sounds that differ in each presentation. As the artists leave the room, the machines grow in autonomy and are orchestrated at a programmed rhythm, with time intervals softened by silence. The performance is transformed into an installation and remains active in the space. A unity is achieved as the beats meet. Scores conduct mechanical music. And in the screeching of the (almost) invisible strings or in the accelerated spinning of the trio of cans, the rhythms become visual. Amidst all this, a mechanical ballet escapes.

The artisanal work in Orchestra Machine is the result of a meticulous process, in which art, technique and science merge in an analogue and digital fusion. The turn of the 21st century was marked by the advance from analogue to digital technology, and the artists Roberto Freitas, O Grivo (Nelson Soares and Marcos Moreira) and Marcelo Comparini and their generation were affected by this transition. The solutions found for machines to function, therefore, could not be drawn from a knowledge that combines understanding from these two branches. The cognitive development of the invented machines occurs in the convergence of a technical domain with artistic perceptions, which directly interferes in the notion of space and time.

In the historical tradition of instrument creators and noise activators, the references are countless: from the futurists to the inevitable John Cage. But we can go even further back to the unheard musical instruments of Leonardo Da Vinci. Among Leonardo’s several projects, in his drawings a study into the construction of an automatic Pianola can be found. The musician would play this instrument while walking, as if he had a keyboard attached to the waist; it would work through the use of a horse hair, in continuous movement inside the pianola, touching the strings moved by the keys, and emitting a violin-like sound through the friction. Other projects include: the lira de braccio, with a more scenic than musical purpose, which used animal parts as the sound board; or also a mechanical drum, conceived to be used in celebrations or battles with the aim of scaring the enemy, which could be played by a person, an animal or engaged by a lever. These machines have survived through the drawings, which pay witness to the intention of instrument-machines. But experimenting with noises produced by machines or incorporated from everyday life only became part of the art world much later, finding its place in 20th century art. Currently, the investigation of noise in the field of art encompasses sounds and images, capturing that convivial relationship with increasing intensity through the use of technological devices.

The creation of instruments based on sculptural thought makes the Orchestra Machine transit between the spaces of music and visual arts, with a contemporary perception. Unlike Leonardo’s machines, everything is built with no design; it is in the doing itself that the thing happens. That is why the research is so important; it could only occur upon these artists meeting (made feasible by support projects). A meeting that enabled a pause of a thousand beats (uma pausa de mil compassos), to cite the master Paulinho da Viola. A pause long enough to carry out the work. Performance installation, sound sculpture, visual music, no single definition seems to adequately account for this project. The uniqueness of these contraptions springs like an inexhaustible source of ideas and knowledge, and the size of the rigmarole is revealed. Orchestra Machine, this indefinable and undecipherable mishmash, seems to shift between the temporal experience of sculpture, the choreography of the machines and the spatial repercussion of the sounds.