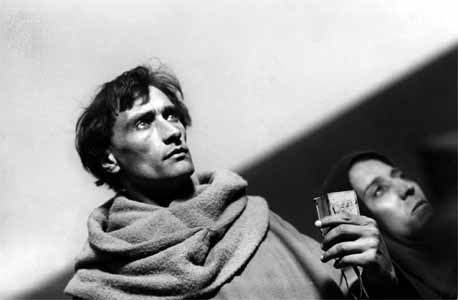 The theatrical tradition of India and the myths about the birth of theatre from ritual constitute an integral part in the thought of Antonin Artaud, who focused on the actor’s body and breath, aiming to renew the theatrical language of the West. Artaud’s “Theatre of Cruelty”, a performative act where the feelings are transmitted through nontextual means, is the vision of a theatre that does not represent life, but is life itself.

In an effort to renew the theatrical language of the West, Antonin Artaud focused on the actor’s body and breath. Instead of trying to frame it within the needs of the text, he sought to find ways to make it stand out and acquire a presence of its own. Turning his research towards breathing practices related to religion and medicine, such as the Cabala and acupuncture, Artaud asserted that by using certain tempos of breathing patterns the actor can “make use of his emotions like a wrestler makes use of his muscles”.[1] He also suggested that just like the acupuncture’s needles, that release suffering by balancing Yin and Yang forces, breathing inwards could help the actors stimulate memories and feelings.

Artaud feels that the actors can find an inexhaustible source of inspiration within themselves. He suggests that the role of breath is vital in this process, since every kind of alteration in breathing has the ability to create memorable effects and arouse one’s thought and emotion. That is to say, the focus on breath is presented as the first step to explore the unknown fields of consciousness.[2]

Artaud states that “every emotion has organic basis. It is by cultivating his emotion in his body that the actor recharges his voltage”[3] and that “It is certain that for every feeling, every mental action, every leap of human emotion there is a corresponding breath which is appropriate to it”.[4] This means that every physical, mental and psychological vibration affects our breath. So, if the body movements and feelings all have their parallel breathing, the actors need to explore how these are interrelated.

Such exploration would, according to Artaud lead to a new kind of theatre, where the actors can affect the public directly, only through controlling their body and breath, without the use of word.

Artaud started exploring the dynamics of body and breath after watching Balinese actors perform. Similarly to the Sanskrit tradition of Kudiyattam, in the Balinese theatre the main concern revolves around the spectator’s experience of rasa[5] through gestures and signs. Influenced by the mysticism of the Balinese theatre, Artaud states: “through the hieroglyph of a breath I am able to recover an idea of the sacred theater”.[6]

There is certain nostalgia for the origins of theatre in this statement, reminding us of Nietzsche’s nostalgia towards ancient theatre. Like Nietzsche, Artaud also believes that theatre should be rescued from its “servitude to psychology and human interest”,[7] shifting the focus from the objective and descriptive external world to the internal world, the metaphysical aspect of man.[8] His vision for the theatre is aimed towards a resurrection of its mystical quality and a creation of a “naked language of the theater (not a virtual but a real language)” that would “permit, by its use of man’s nervous magnetism, the transgression of the ordinary limits of art and speech, in order to realize actively, that is to say magically, in real terms, a kind of total creation in which man must reassume his place between dream and events.[9]

This transgression of the limits of art and speech involves using the body and its forces as a means of communication. In order to define a kind of theatre where feelings and meanings are transmitted not through words but through action, by the transferring of forces from actor to audience, Artaud introduced the term Theatre of Cruelty. By the word “cruelty” he wasn’t referring to violence, but to “a kind of severe moral purity”[10]–in other words, he was talking about an inner truth in theatrical act.

Artaud believed that representation was not the only objective in theatre. According to him, there was a deeper, almost mystical force in theatre, which could lead the actors and the audience to their innermost psyche. He claimed that, by breaking the traditional bonds that keep theatre attached to representation, the theatrical stage could become a doorway leading the audience to the “known or unknown fields of consciousness”.[11]

According to Jacques Derrida’s reading of Artaud, the theatre of cruelty is not representation. “It is life itself, in the extent to which life in unrepresentable. Life is the nonrepresentable origin of representation”.[12] Derrida interprets Artaud’s theory as a proposal for a repetition without reference, a kind of performance that refers to itself and not to reality, the same way that life does not represent anything else but itself. Breaking the bonds with representation was the first step towards a contemporary perception of performance, not only on stage, but also beyond it, in performance art.

[5] Rasa: the delight experienced by the audience as the result of a theatrical event in Kudiyattam, the Sanskrit theatre of India.