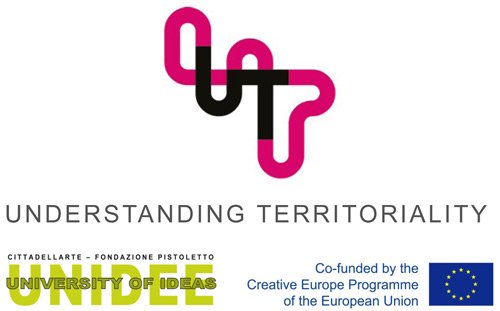 Creating Territorialities is a research-oriented residency program, aiming at investigating notions and forms of “territoriality”, meant as an interrupted relationship between inhabitants and territory. Territory - whose investigation is based on its complexity and qualities, and on spatial, cultural and social sustainabilities - is understood here as an outcome of the co-evolution of human life and that of the living place, as composed by historical, cultural, social and identitarian stratifications.

Creating Territorialities, developed in collaboration with geographer Thomas Gilardi, and with the participation of lecturers and experts on a range of relevant disciplines (humanistic geography, philosophy and hermeneutics of place and landscape, urban planning, aesthetics, new technologies and theories of complexity, history and heritage creation), is built on the coexistence of territorial and extra-territorial, on locality and globality in our daily life. The experts and lecturers will be chosen in partnership and collaboration with national and international universities and research centres. The weekly residency aims at investigating the creation of new forms of territoriality, while attempting to reinvent the cultural denomination of places and their assigned “functions”. In these terms, the artistic research and production of Creating Territorialities is understood as a “reterritorialization” act.

Please check the open call for applications to partake in Creating Territorialities, a weekly residential module conceived for Cittadellarte - Fondazione Pistoletto by Giusy Checola within the frame of the project Understanding Territoriality: Identity, Place & Possession (TIPP) and developed under the umbrella of UNIDEE – University of Ideas (directed by Cecilia Guida and developed in collaboration with Juan Esteban Sandoval, within the general direction of Cittadellarte’s director Paolo Naldini).

Amongst the notions where TIPP project orbits, “territoriality” is the one that includes, more than the others, the possibility to work on co-evolution of human life and the place; on the interrelated transformation of societies and territories and on the co-presence of the local and the global in our daily life. On the opposite, the forms of territorialisation, de-territorialisation and reterritorialization can be actualized exclusively by mankind, in order to transform and dominate the territories.

I have unfolded my reflections on the concept of residency as a possible reply to two big questions posed by Paolo Naldini: “How can artists catalyse and contribute to the 'social pact' in order to create a peaceful society, that reciprocally benefit on a local, inter-local, regional, national and global level?”; “Which tools and methodologies would artists need to achieve an authentic commitment with places and give a useful contributions?”

The necessary overcome of the territory pre-political concept, which in the Middle-Age was configured as the reaffirmation and the defense of a right given and inscribed in the land itself, and of the modern concept of cartographic origins that configured it as a measurable area, preconditioned and governable according to principles of casuality (radicalised in the absolutism of the modern State through the imaginary meanings of “national territory”), brings us to the need of a critical reflection on the concept of territoriality meant as a symbolic, identitarian, spatial and political statement. Yesterday as nowadays, micro and macro strategies of expansionism and occupation are built upon it; strategies of emptying territories as container of “quantities” to reset or multiply, to make flow into or to pour out; the processes of generational, cultural and spatial territorialisation.

Until the '80s, the years of neoliberal expansion, the “place” was defined as “circumscribed space, attributable to a geographic or topographic entity, or to the features or functions owned by an environment” (Devoto, Oli, 1982, Vol. I, p. 1515); rather it was defined as “portion of a geographical space occupied by a person or an item” (Johnston, 1981, p. 254)[1]. Nowadays, as urbanist Alberto Magnaghi explains, “the attention to the place that gives birth” as “heritage”, hence the attention to the “local”, has become the real battlefield, because everybody, from global markets to small producers, need such a value. As to say, since being the fundamental component of imaginary, spatial, structural and so identitarian signification of the territory. Moreover actually, in the transformation processes of territorial composition, forms of deterritorialisation and reterritorialization derived from ongoing local and geopolitical processes intervene with unusual speed, like the de-spatialisation of some urban areas, the migratory fluxes and the “structural” economic homogenisation processes in Europe, seemingly augmenting, instead of reducing, the local social gap; as well as the social, economic and political gap between the countries of Northern and Southern Europe.

Modern territorial plans, ubanist Alberto Magnaghi states, inturrupted local subjects' spatial articulation and reified the complexity of places assigning unique symbolic, material and structural connotations, without granting the enrichment and the constant re-creation of cultural, historic and environmental stratification of the territory. These stratifications are given by the integration and the substitution of previous territorial values with other significant values of settling forms and by the relationship between the use of soil and the spatial and socio-cultural articulation; instead provoking the degradation of the territorial structure, inherited from the long time of historical process (Di Pietro, 1978)[3].

Here a need arises to work on territoriality as “reconstruction of the interrupted co-evolutive relationships between human habitat and environment”, that means “to resume, in new ways, the interrupted production of territoriality as for production of value” of the territory (Magnaghi, 2000)[4], where artistic research and practices related non only to public “space” but also to public “sphere” can play a fundamental role. Naturally the term “value” doesn't refer to the value of use and exchange, but to the value of territorial specificity in terms of historical, cultural and environmental “qualities”, including pluri-cultural and conflictual components of new societies.

Referring to territoriality as reconstruction of co-evolutive relationships between human habitat and environment, and thinking to the residency at Cittadellarte as a space able to reactivate in new conceptual, spatial and visual forms the unterrupted production of territoriality, hence of “locality”, I propose to pinpoint as subject of residency programme research and production a representative place of complexity and actual issues connected to cultural, historical, economic and spatial identity of the town of Biella or its district.

Working on historical, identitarian, environmental and urban stratifications of the chosen place, through the “vertical geographical method” elaborated with geographer Thomas Gilardi as method of “geo-artistic” research, it would also generate a destabilisation of the temporal order of causality that brings us to believe in a future coming merely following the actual economic growth indicators, towards those we seem to be inevitably “predestined.” This process could stimulate also forms of spatial and temporal discontinuity where takes place, in the words of Cornelius Castoriadis, “the creative act”, or rather the instant where this discontinuity happens. It could stimulate other forms of social and territorial identification that, as Bhabba explains, could renovate a place's past and the territorial “tradition” by considering them as “partial forms of identification”, reconfiguring them “as contingent space in-between, that innovate and interrupt the performance of the present”, and then actualizing the “present-past”, a new temporality that “becomes part of life necessity and not a necessity of nostalgia” (Homi K. Bhabha, 1994)[5]. In this sense, the space created in residency could be an interstitial space between the condition of distance and that of proximity, between territoriality and extra-territoriality, because today the matter cannot be discussed in terms of cultural nor territorial comparativism, but in terms of “imagined communities”.

It is true that locality is the territory we feel more emotionally connected, as described in the introduction of TIPP project, but for the above mentioned reasons the territory is neither something we can reclaim as natural right for such a tie, nor think this connection is free from imaginary conditioning of territorialisation processes, thus the symbolic and material places' denomination, which are human actions on the environment and intellectual, spatial and structural control strategies. As a consequence working on “reinvention” of locality should distance “any immediate access on a original indentity or a 'received tradition' (Homi K. Bhabha, 1994)[6], giving people of specific social groups the right to re-significance of places, thus of territories.

Today, in the creative processes of new forms of territoriality, it is necessary to consider the coexistence of individual and collective forms of territoriality and extra-territoriality, as like the sense of belonging or that of “unfamiliarity” towards our places, proximity and public spaces, in favour of a even more structured familiarity with those immaterial from the web, often reinforced by existential condition connoted by a constant mobility. This brings me to think about our “(re)territorialisation action” in residence as a process activated by “temporary inhabitants” of such territory, which is however a cultural and historical product and outcome of a long and costant duration (Magnaghi, 2000), that consequently has to be “looked after” by those living the territory afterwards. As such the residency could activate a process of reciprocal redistribution of assimilated experiences and creative tools by the artists participating to the programme; and redistribution of historical and actual place knowledge by those who experienced it, inhabitants but also by those that do not recognize it, thinking about a workgroup formula that includes both. I don't imagine this co-presence, which in some way I connect to the co-generation of mandaments mentioned by Michelangelo Pistoletto in its manifesto Omnitheism and Democracy, as represented by two subjects or by couples of subjects, rather by two “dimensions”:

In this sense, the proposals on new forms of territoriality that could generate from the residency programme, as “(re)territorialising acts” (Magnaghi, 2000) could trigger the awareness on the activating potential of extraterritoriality, and the possibility to re-signify places in order to create forms of relation with the contemporary territory and its complexities, which could be spatiallly, culturally and socially sustainable and hopefully self-determined.