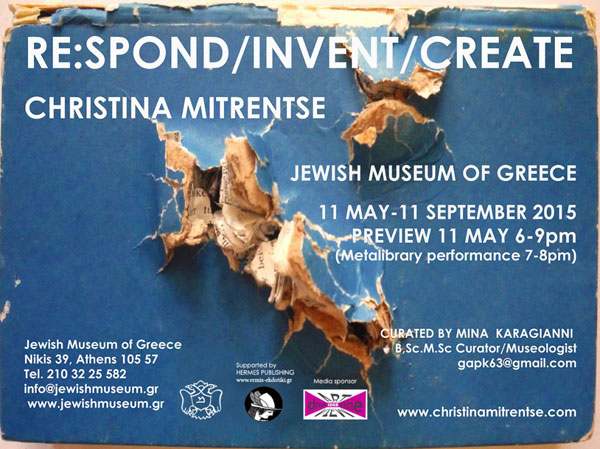 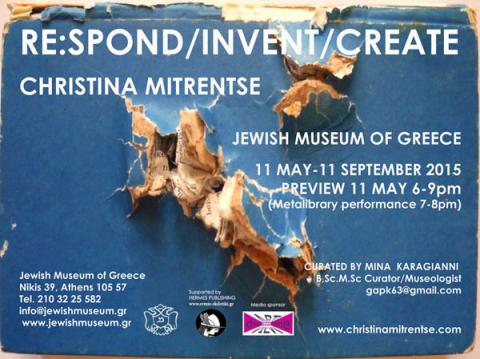 Amid gentle folds and burning bullets, ritualistic performances and emblematic flags, Christina Mitrentse’s work articulates a dialogue with real and symbolic spaces that express knowledge and history – libraries and museums. The prime material for her work is the book; while taking into account the significance of the book as an element of culture and knowledge, she explores new creative possibilities by cutting and folding their pages, stacking them, putting them into arrays and even shooting them.

As the book turns into an element of creation, its material qualities become better appreciated: the binding, the texture of the pages, the font of the printed letters, the colours of the illustrations. On top of its visual qualities, the artwork helps new ideas emerge: Through the cuts and folds of her sculptures the words and images printed within the book are reshuffled into new visions and meanings. Thus, the public not only can appreciate the visual qualities of the sculptures –the mushrooms- but it is also invited to undertake the role of the reader, trying to reconstruct a new meaning from the words that are visible through the folds. Sometimes the content of the book is overtaken by the sculptural form; other times the form is dictated by the content, like the pages of an edition about Jews in Germany that are cut into the Star of David.

Mitrentse’s work stresses the power of the ideas that are propagated through the books. In her flags the books are aligned in a way that they compose recognizable symbols of political ideologies and regimes, like Communism, Nazism, the European Union. The process of deconstruction of these symbols and their reconstruction with different elements could be perceived as contemplation on the power of these ideas and the histories that are inscribed in them. The public holds an important role in the emerging dialogue between the visual and the conceptual. In her Add to my library series of performances, Mitrentse lets the participants select the books that will form the final work –thus letting them decide on its morphological and ideological qualities.

These actions –carried out within museums and libraries- reveal that the main element of Mitrentse’s work is not simply the book or the ideas that it represents, but it is also linked to the discourse regarding the museum and the archive. According to Michel Foucault ‘museums and libraries have become heterotopias in which time never ceases building up and topping its own summit’; while expressing the ambition to bring together different ideas and historic periods they serve ‘the idea of constituting a place of all times that is itself outside time and protected from its erosion’ [1]. By introducing the finiteness of the event in an otherwise unchanging heterotopia, Mitrentse reconnects the museum or library with the experience of the present: through her work the people can relate the museum artefacts or documents to their everyday life, where objects can be touched, moulded and creased and knowledge is formed through experience.

On the other hand, Mitrentse offers a transversal interpretation of the idea of the archive, where different elements are ordered in accordance with specific regularities. Foucault defined the archive as the law of what can be said, the system that defines the multiple relations between the elements. The multiplicity of the archive is reflected in its etymology: as Derrida observes, it is linked to the Greek word Arkhe, that signifies commencement and commandment –a point where things start physically, historically or ontologically and at the same time a principle of law [2]. In other words, the archive of a museum is not the artefacts and documents, but rather the initial statement, which composes these elements into a narrative.

In the case of the Jewish Museum of Athens, the Arkhe that sparked its existence and fuels its expansion is dual: on one hand, it is to show the history, tradition and culture of the Greek Jewish community; on the other hand, to use the historic lessons from the Holocaust to warn of the dangers of bigotry, fascism and intolerance against the different. The objects and documents presented in the museum put into pieces a fragmented story of cultural flourishing, deadly destruction and rebirth. Each object presented in its collection carries a part of the narrative, sometimes revealing more than what simple words would be able to describe. The history of the Greek Jewish community is weaved within the historical past of Greece and Europe, and gives valuable insight for the present, at a time when the prospect of a multicultural society is being eroded by the same demons. Within this context, the collection of the Jewish Museum in Athens helps remember what occurs when the advocates of fascist ideologies burst into violence against cultural minorities while the majority remains apathetic.

Christina Mitrentse’s latest series of work further highlights this idea: in her Wounded Books series bullets are shot onto books leaving holes behind. By ‘wounding’ books that talk about Nazism and the Second World War, Mitrentse creates holes that symbolize the violent death of millions of people, a gaping void that reminds us of what is not there anymore. In the case of Greece, it refers to the absence of the people who were killed in the country or in concentration camps during the Second World War. Mitrentse’s Wounded Books and the Jewish museum that hosts them tell the story of what happened in the past, when cultures and humanistic ideals were under attack, and what could ensue in the future, if we repeat the mistakes of the past. At the same time, there is an underlying optimism: the book is wounded but it is still there, we can browse through its pages and recreate from the remaining context the words that perished in the passing of the bullet, the same way that we can reconstruct the history of the Greek Jewish community through the artefacts of the museum.

Thus, these artworks and objects become symbols of perseverance.

The exhibition Re:Spond/Invent/Create will take place at the Jewish Museum of Athens. 11 May - 11 September 2015.
(Preview May 11, 2015. Metalibrary Performance May 11, 7-8 pm). For more information: christinamitrentse.com and www.jewishmuseum.gr