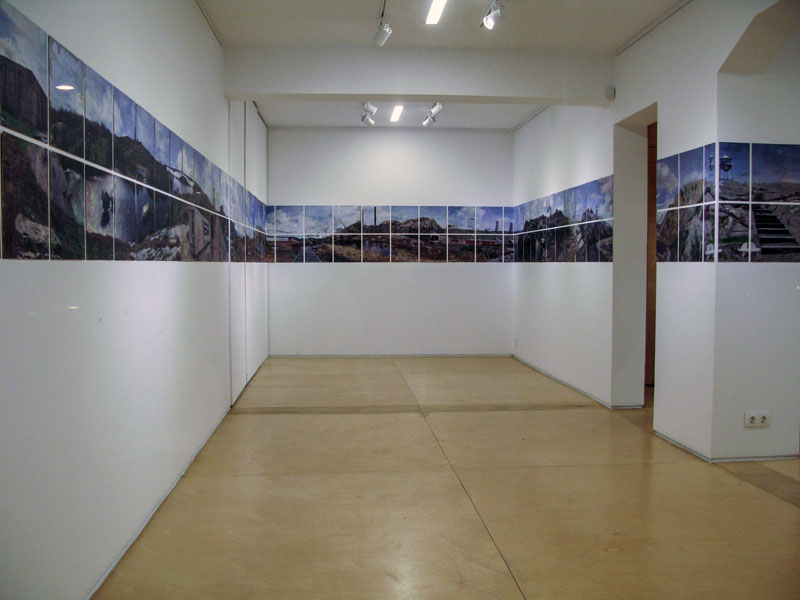 Nitra Gallery presents the newest chapter of the Quest of Query project by Theodoros Zafeiropoulos entitled Applied Altitudes. Quest of Query is an ongoing, collaborative project initiated in Bergen, Norway in 2013, and realized so far in Hungary and Greece.[1] The materials filmed, photographed, made, and collected by the artist in Bergen are organized into an archive, which is re-interpreted, and new artworks are created from it at each exhibition location, based on the different focus of the chapters. Quest of Query: Applied Altitudes showcases an installation of a 20-meter long landscape panorama digitally (re)mastered from over 500 images taken in Norway. This digital archive, manipulated by the editor George Boulasidis, is printed with UV inject on pre-coated linoleum tiles.

The exhibition activates one of the core concepts of Quest of Query, the notion that “landscape is not innocent,” while it engages with the theme of the flow of circulation in the world system. The digitally processed photo collage presents an immense mountain top view of Fløyen, an amusement landmark and natural fence for Bergen. This symbolic mountain site, relegated and hidden from the city, is a culmination of a series of infinite digital transformations, in which the very real issues of global environmental politics today—that is the financialization and commodification of nature— are im-planted and compressed. More concretely, the panorama contains numerous signifiers of human transcendence and interventions: machineries and constructions, such as deep-water oil drilling rigs, power plants, touristic facilities, waste disposal sites, as well as solar parks, hydro, and wind power units as alternatives to energy production by fossil fuels. This environment is not a natural habitat but a field of social and political imprints.

Yet, by touching upon the problematics of environmental change within an illusionary, sci-fi image, it also resists direct criticism and engagement with political ecology. This paradoxical double ontology—another salient feature of the Quest of Query project overall—allows for the artwork to simultaneously stay on the ground of facts and symbols, politics and aesthetics, as well as investigative reporting and allegory. The constructed panorama has “real” elements, but taken as a whole, it is a “natural allegory,” an image of a non-existent, conceptual land. Applied Altitudes, hence, instead of making statements, asks questions: not only about the disasters of eco-capitalism, but also about how these human interferences in nature unnoticeably make life easier or more efficient. In another words, Applied Altitudes probes also how energies circulate in the world, which is amplified even more so by the use of the panorama.

Panoramas in the 19th century in Europe, the emergence of which was likewise connected to the advancement of capitalism and colonialism, were structures of illusion—composed of a 360-degree painting mounted on the wall of a rotunda building that the audience entered—was able to take people “beyond the horizon,” to far-away lands.[2] In the case of Applied Altitudes, however, it is an illusion within an illusion: an imaginary/artistic representation of a constructed/manipulated land.

While the genre of landscapes depictions has clear ties to mimesis (imitatio naturae), the photo collage again makes this (signification) process more complex. This landscape is more of a narrative than just an image; that is, it is more diegetic than mimetic. The construction of a visual narrative—and a model of perceiving and understanding the world—through the depiction of landscape elements, relates the monumental panorama to 15th-16th-century predecessors, Hieronymus Bosch or Pieter Bruegel. The ambivalence of rendering aesthetically something immanently dreadful, especially within a landscape imagery—as for instance in The Garden of Earthly Delights by Bosch—can also be connected to the concept of the sublime: impossible to comprehend, beautiful and terrifying at the same time. Applied Altitudes similarly builds on the alluring and aestheticizing illusion-effect, while it also contains the dangers inherent in the (ab)uses of nature. This picturesque synthesis, not unlike a testimony with morals; is a display of parts of a new world that we built for ourselves.

** The exhibition Applied Altitudes is the fourth chapter of the project Quest of Query. The first two chapters were presented in Budapest in 2014 at the international contemporary art organization Tranzit and at the Deák Erika Gallery. The third chapter is presented at the Center of Contemporary Art of Thessaloniki (Warehouse B1, port, part of the State Museum of Contemporary Art) from January 23 to March 9, 2015, entitled Quest of Query: Interpretations of the Actual curated by Eszter Szakács.