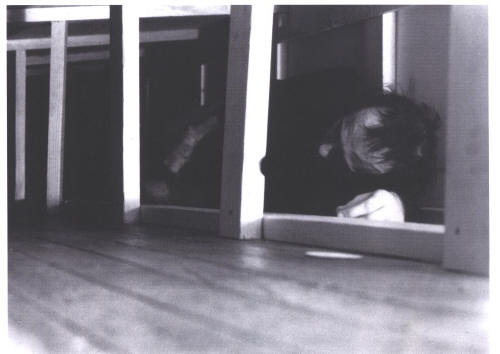 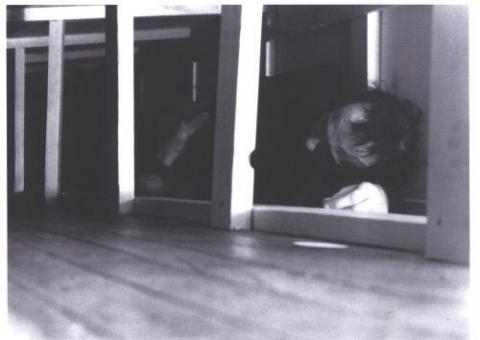 During the past five decades Vito Acconci has experimented with different types of art and style, starting from poetry and moving forward with performance, video, architecture and landscape design. The diversity of his interests and capabilities is manifested in his works of the late 1960s and early 1970s, where word and action are balancing in repetitive videos and performances.

Acconci has particular interest in everyday actions. Following the tradition that grew particularly strong during the 1960s –under the effect of pop art-, Acconci focuses on the mundane, trying to extract and project a hidden aesthetic value in it.

In the sound piece Running Tape (1969) Acconci runs through New York’s Central park, counting every single step and recording his voice as he runs. His heavy breathing illustrates his effort.

Cassette recorder on my belt, microphone in my hand. Running, and counting each step as a I run. (When I have to -- when my words get jumbled, when I'm out of breath - I stop and breathe into the microphone, catching my breath, until I can continue my run, continue my count.)[1]

…there is no other aesthetic problem than that of the insertion of art into everyday life. The more our daily life appears standardised, stereotyped and subject to an accelerated reproduction of objects of consumption, the more art must be injected into it in order to extract from it that little difference which plays simultaneously between other levels of repetition […][2]

By extracting everyday actions, like running or breathing, from their context Acconci manages to give them an aesthetic value. Taking this principle to a more abstract level, he created the video Breath In (To) / Out (Of) (1971), where the foreground shows little else but the artist’s stomach; as he breathes in an out, his stomach moves in and out of the frame. Breath is projected here like a separate entity that gives life to the image.

In most of Acconci’s work during the 1970s voice and language have a particularly strong presence. In most of them the artist tries to implicate the viewers in the performance through his words; the viewers somehow become accomplices to his psychotic ramblings –as in Claim Excerpts (1971), where he sat in a basement, blindfolded and armed with a metal pipe, inducing himself into a state of paranoia by mumbling continuous threats towards the viewers - or his sexual fantasies –as in his notorious Seedbed (1972), where he lay hidden underneath the gallery floor, masturbating and whispering his fantasies with the people who stepped on the floor.

The video Open Book (1974) somehow oscillates between these two extremes –threat and desire. The artist’s lower face fills the screen, leaving nothing left in sight but his moving mouth. Acconci tries to talk to the viewer without closing his mouth, only using the vocal cords with slight movements of the mouth, instead of using the teeth and the tongue. By cancelling one of the basic steps in the formulation of speech, the artist projects the origin of voice in breath: his effort results in a particularly airy way of speaking, a whisper with strikingly audible breathing.

The phrases he pronounces are somehow mysterious and disturbing; the artist invites the viewer to do as they please with this mouth:

It is a call to the viewer for dominance; however, there is an underlying threat in the way the mouth speaks, as if it were seeking to trap the viewers. Just to reassure them, when it shuts at some point, it begs for forgiveness:

This passiveness and complete surrender to the viewer is in contrast to the works produced by other male artists of body and performance art in the 1970s, who emphasized their active role in the performance. Still, Acconci does not give up his active role, since he is asking to be dominated, instead of waiting for the viewer to take initiative; moreover, he places a barrier of space and time between him and the fulfillment of the viewers’ wishes, by making it a recorded action.

On the contrary, there were female performance artists in the 1970s who not only faced the viewers, but also took responsibility for their actions. It would be interesting to remember here Marina Abramović’s performance Rhythm 0 (1974), where she introduced the public with a note which read “There are 72 objects on the table that one can use on me as desired. I am the object. During this period I take full responsibility.”[3]

On the other hand, there is a certain similarity between Open Book and Samuel Beckett’s Not I. In the filmed version of Beckett’s play, we see a mouth that acquires a life of its own: the lips, teeth and tongue move in a seemingly exaggerated manner, as the mouth inhales air and exhales words.

Just like in Beckett’s Not I, Acconci’s Mouth is an entity of its own. However, in Beckett, the Mouth persistently denies the first person, when the auditor seems to suggest that the story She narrates is her own: “what?... who?... no!... she!”.[4] On the contrary, Acconci not only talks in the first person, but uses this first person to talk as a Mouth; the artist becomes a talking Mouth.

Language and narration in Acconci are subject to a very strong corporeality, that is either linked to physical activity or to sexual drive.

[4] Samuel Beckett, Not I, London: Faber & Faber, 1973. The phrase is repeated several times within the text.