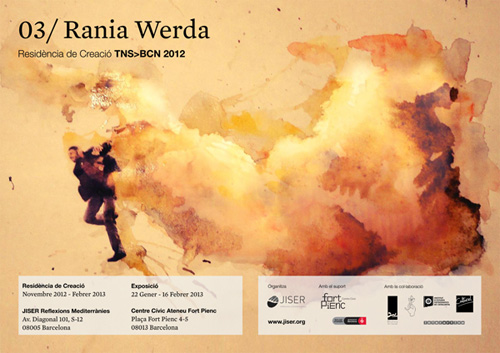 From my first contact with these works, I was shaken by a multitude of questions. I was flooded by emotions, as I confronted multiple time spans intersecting with trampled commemorations, lost in the emotion of an interlocked memory

I could not bring myself to detach from this provocative subjectivity, while the works were guiding me into a plastic way, previously conceived, in my opinion, by the artist.

The general idea was invented by Rania Werda, a young Tunisian artist, who realized the first works in Tunisia after the revolution. Concerned and speechless by the events, she started a collaborative work in Spain with Hejir Chelbi, her friend, a Tunisian artist too.

Together, they tried to understand their state of mind and to express their malaise in these artworks. The result is the expression of their deep feelings.

Therefore, I let myself be carried away by this artistic discomfort which was ingeniously tinkered with mockery, in order to narrate the dislocated events of a revolution tormented by shock, emotion, astonishment and sarcasm.

Everything is a miniature and a blinding whiteness of a grotesque vacuum. The characters seem to be wandering into the pictorial space like castaways looking in vain for an explanation of their fate, as they are mixing in their minds nostalgia and emotion, pride and derision.

Fragmented, the works appear like sketches animated with movements and emotion. Both artists had to simplify the cluttered crowds to reduce the human equation to one unknown factor, the future, leaving thus a heavy and eloquent emptiness combined with a dispersed presence of cameras involving the viewer in a kind of projection reflecting the allusive temporality of the works.

Like a whimsical advertisement or as an icon sanctifying the vanity of an enraged adoration, the artists, exhausted by the flattering imagery, present us a story that outlines their concern and gives the spectator a memorial charge of an auspicious past and a …mutilated future.

Therefore, the works move in a somehow ironic contradiction: on one hand, this majestic side staged by a fuzzy “Sfumato” and a blinding light in the background, baptizing the marred characters with a venerable halo. On the other hand, these colored spots, flowing contours of quasi unfinished sketch, present these beings with their ephemeral form, propelled into some constrained actions like a short movie projected in slow motion.

This pictorial and inert projection results from an evolutionary history, of a memory, of an imperfect reality, of an illusion transmitted in a Live-show by these cameras held by hands thirsty for bloody images. Such a grotesque voyeur stripped of all decency and morality that, standing in front of a body that has been shot down, prolongs his agony.

From the hyper-realism of the faces and expressions to the minimalism of the twisted silhouettes, through a moving romanticism of a red-blood spot and a toxic Fluxus that spreads the dust and the smoke of this revolution through snide postcards, the course of art follows the liberal way of the revolution, plunging the viewer into an emotional tension stifled by a silence overtaken by the events.

"We do not understand what is happening, we love our country and we already experience a feeling of nostalgia for a revolution that continues without knowing where it leads to. We are tired of this media diarrhea that celebrates our death and our discomfort. “

It is with these words that the two artists express their calm anxiety, a feminine concern.