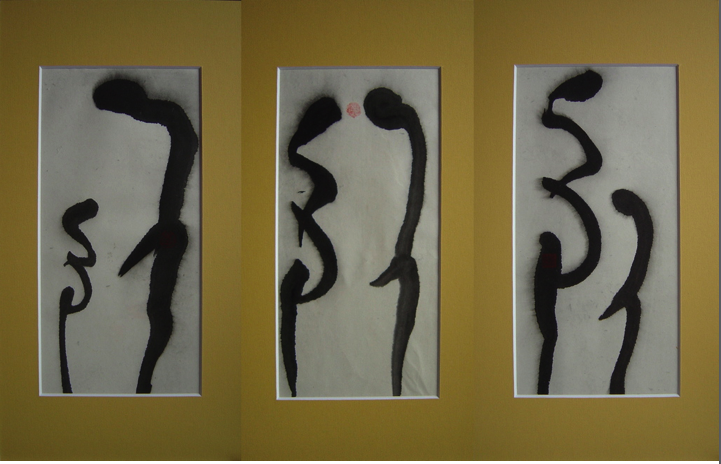 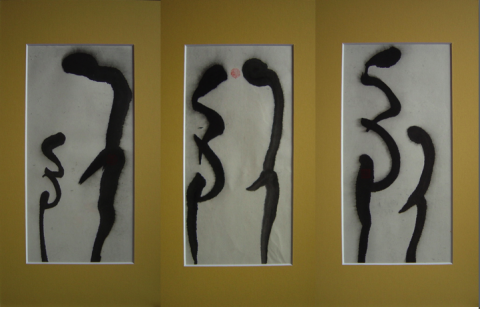 Yang Li’s Mustard Seed Forest is an installation that brings together Eastern tradition and history with Western contemporary aesthetics. She sourced inspiration and theory from a Ming and Qing dynasty didactic and philosophical Chinese traditional painting manual entitled The Mustard Seed Garden Manual of Painting (Jie Zi Yuan Hua Zhuan芥子园画传) also translated into English as The Tao of Painting - A study of the ritual disposition of Chinese painting. Which is not actually one book but rather a series of books curated by Li Yu between 1679 and 1701 with specialized themes such as: Book of Trees, Book of Orchids, Book of Rocks and Book of Feathers-and-Fur and Flowering Plants [1]. The manual was curated by Li Yu, in an attempt to consolidate the most appreciated artists’ paintings from merely existing in private collections to becoming accessible reference points for professionals, which traditionally existed in three different classes: craftsmen, historians and the literati (scholars).

The mustard seed itself being considered the smallest seed, and a mustard seed garden suggesting the concept that something larger and more complex can grow out of the most humble, insignificant beginnings. The western variant of the adage being, ‘mighty oaks from little acorns grow’ which originates from the 14th century. There are other meanings attached to the idea of seeds in Chinese culture, such as the idea of death and rebirth. Which is derived from the process where plants have to die for the seeds to be harvested. This idea of birth-death-rebirth has been explored as a larger theme in Yang Li’s work, through the metamorphosis of a young, emerging artist.

After Yang Li graduating from the Tianjin Academy of Fine Arts in China she moved to Tallinn, Estonia to study sculpture and Installation at the Estonian Academy of Arts. The desire to combine traditional Chinese aesthetics in contemporary Western forms was first explored in Calligraphy in Space (2008) a ceramic and wood sculpture.

However, in her following works such as Baby Carriage (2009) and My Time (2009) she found herself in alien territory as an artist, working in mediums and styles that were the antithesis of her Chinese fine arts education in painting and calligraphy.Yang Li’s classical fine arts education in Tianjin included studying under a world renowned Master of traditional literati painting, Huo Chun Yang who is known for his exploration of Tao and Zen philosophy in his paintings. In the theoretical portion of her Master’s thesis, Yang explains how living in a different country, adapting to new cultures and learning new aesthetics changed her previous worldview and synthesized something new out of the old which was directly reflected in her work.

"In Hegelian thinking his most famous contribution deals with the antithesis as much part of the whole as any other part can be. It is like going so far away from home that when you come back you are not the you you thought anymore, and then something needs to be done about it; and a third you comes along, more synthesisez maybe".[2]

The alienation and distancing effect having a dual role, on both the artist and the audience as they navigate new symbols and contexts – creating a new language, seeing through the canvas to the intangible heterotopia.[3] The process of painting itself according to Li Yu’s manual, being an organic process, where the placement of one line or stroke ‘grows’ the next movement, an imitation or mimesis of nature itself. “These skills, as the master says, must be made visible with the least possible use of artifice and embarrassment of lines, with “a few twists of the wrist”, as if to indicate the total fusion of the mind-body unit we may call artist and that “locked thing” inside.”[4] The “locked thing” inside the artist and the language used to express these things, can be seen as ‘Tao’, which can be translate as a oneness with the path and the eternally nameless. As Lao Tzu’s classic text the Tao Te Ching starts:

"The way that can be spoken of

is not the constant way

The name that can be named

The attempt to communicate “something beyond words”[6] is part of the intangible aspects of Chinese paintings, in addition to the Western elements of composition and perspective are other dimensions such as the flow of Qi (energy), spirit resonance, balance and the anthropomorphism of animals, trees, rocks and water. Mustard Seed Forest harbors hidden messages and symbols, the negative space connotes fog and mist as well as serving as paths for visitors to wander the forest, in a maze of trees, rocks, water falls and a singular bird in a tree. The ceiling to floor plastic sheets that the individual forest characters of calligraphy trees are portrayed on, catch and bend the natural light in interesting and unexpected ways. When Mustard Seed Forest was first exhibited at The Museum of Contemporary Art of Estonia, the shape of the room and late winter natural light that streamed through the windows bounced off the transparent forest canvases to create the effect of pools of rippling water on calligraphy ponds and waterfalls.

The scent of Japanese incenses wafts through the forest of calligraphy trees creating a multi-sensory experience.

The effect of a maze of calligraphy trees, dancing light that perfectly mimicked rippling water and the smell of heady Japanese incents in a cold, abandoned Soviet era factory building, turned art museum – was a seminal sensory experience. Much like performance art that may not be replicated, it was something that could only be experienced to be understood as it was ‘something beyond words’. Traditional Chinese scroll paintings often use human figures to invite the viewer to wander the landscape, Mustard Seed Forest is an installation of transparent canvases that incorporate human interaction to create a three dimensional experience of wandering a forest of Chinese calligraphy, as if wandering through another alphabet or symbols the visitor can navigate the maze to view the forest in it’s individual parts or stand back and take in the whole, the message changing at every angle.

As Yang Li writes in her reflective essay, the work was a very personal process and voyage of discovery, while at the same time containing a larger altruistic attempt at unity and mutual understanding. Her attempt at creating a sensory experience which is self explanatory and spontaneously invites the visitor to partake in a transcultural contemplation of nature and art, East and West, form and space. The Mustard Seed Forest invites us into something timeless, placeless, an invitation to see the magnificence of everyday life albeit through another system of signs, another language which at its best can create the artist’s intended feelings of pleasure, surprise and curiosity and at its worst be viewed through a xenophobic lens of stereotyping other cultures and aesthetics, and confusing a traditional homage with an inability to experiment with what may be considered more contemporary mediums.

Mustard Seed Forest was exhibited twice in a short period of time, to great public appreciation and media attention. Yang Li’s first exhibit of Mustard Seed Forest was in early April 2012 at The Museum of Contemporary Art of Estonia, which was quickly followed by an invitation to exhibit the same work again by Kirke Kangro, the curator of the ‘Exotic’ exhibition, an international exhibition which takes place from April to June of 2012 at Tallinn Art Hall. Yang Li’s work has been featured in assorted media in Estonia and abroad, and has proven to hold its own among the highest regarded Estonian contemporary artists. Mustard Seed Forest is an exploration of the complex relationship of insider-outsider status of a Chinese artist who found a voice in the fertile Estonian art world.