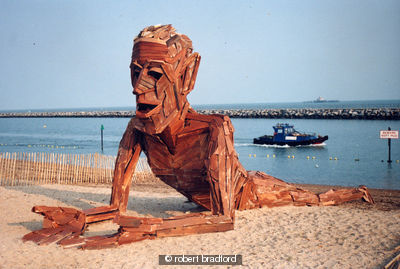 In Dolní Věstonice, the well-known Paleolithic site in the Czech Republic, thousands of fragments of clay figurines have been uncovered in a kiln. The figurines exhibit rather quick and unrefined modeling, a fact that, combined with the quantity of the fragments and their concentration in the kiln, has led scholars to a hypothesis that they were blown up as part of a sacred rite of destruction or a ritual closing. The oven at some point must have been set to a very high temperature so that all its contents exploded in a noisy and spectacular bang. What better way to mark the end of a celebration or prayer?

On the other hand, since many statuettes also show intense use wear, and since similar images of people and Pleistocene animals, a few centimeters high, and with a similarly rough modeling, have been found at other sites as well, especially in today’s Russia, one cannot dismiss the idea that they are indicative of children’s toys: Some archaeologists have imagined that the golf-ball-sized hearth-fired figurines of women, lions, mammoths and rhinos were used by youngsters to play with.

Whether they were made for ritual explosion or to be overused and discarded by children, the fragments of these rudimentary figurines, not carefully dried or fired, then broken and left as debris near a campsite, remain a mystery. I think Robert Bradford would enjoy this kind of archaeological research: He is very much into looking for, matching together and recruiting children’s toys and junk to make up stories; he likes big ritual bonfires.

Using old erasers and keychains, gumball charms, damaged toys from the 50s through the 70s to make new objects is not about making new-looking objects at all. The whole idea of, say, robot sculptures or DIY scrap compositions is to produce objects that look “familiar”, not intimidatingly “original” or “new”. People -the public, the buyers- just want to see them or have them for company. Practitioners as diverse as the recycle artists Leo Sewell, James Corbett, or Sayaka Ganz, or toy/doll artists like Sara Schindel or Jon Beinart, all appropriate some of the recycled objects’ biography and exploit their energy and symbolic radiance. They incorporate the strong calculated and mass-marketed design that makes them attractive in the first place. An old, overused, broken part is inherently nostalgic – recycle it (artistically) and that doesn’t make it “new”, it just respects and celebrates the oldness.

Toys are expressive and ludic artifacts, they spell or cry out their use and meaning, magic is inherent in the objects themselves before the artist even touches them – that’s the whole point of re-using them anyway. In any random mis-en-scene, toys tell complex stories, and that is why modern artists have always liked toys, not to mention dolls – remember Hannah Hoech’s dada dolls or Oskar Kokoschka’s escort Alma. Now that magnificent African recycle art has been discovered by the big art-fairs and internet retail websites sell vintage altered art supplies in various conditions, many recycle artists sell their work within the naïf and folk art markets.

Robert Bradford doesn’t see himself as naïf or outsider – he has come to recycle-art after art school, academic film studies, psychotherapy courses and training, teaching at university, several proper gallery shows with his paintings and installations. Another difference between Robert Bradford the toy artist and others, who work with junk and recyclable materials and make sculptures of animals or people, is that he doesn’t break, saw or melt his toys, gadgets or toy parts. He tells his story differently. He picks up the toys, adjoins and combines them, disciplines them and allows them to dictate a new, bigger shape by virtue of their own shapes in cooperation with the wooden armature into which they are screwed. He tries to give them stronger form, endurance, and the impact they deserve.

When you see the finished sculpture, you immediately know it’s out of place anywhere: It won’t smile back at you if you display it at the shop window of an ad company (as I think some sculptures were recently in London). However, being out of place doesn’t make the sculpture uncomfortable. Every piece looks special and contently lonely even in a small gallery room, (that’s where I first saw some of the works a few months ago in Thessaloniki), the same way pre-modern sculpture recalls its own idyllic environment - a garden, a street overlooking a prairie, the entrance to a tomb or an altar…- without being much affected by its immediate surroundings, without overpowering with meaning any other objects near it, just lending them its aura, not engaging them in its own narrative.

These are self-standing, confident works, eloquently introvert in the most traditional way. They stand on the ground or on a shelf, vibrant with colour and strength of shape, and look like they are going to walk out or be taken for a walk, or carried across any distance: They are enduring and transportable. (And maybe there’s something about the realistic posture of some of the anthropomorphic ones that makes them look slightly threatening, like the wax effigy of a heavily dressed up clown or a video-game warrior. The  handguns, on the other hand, are not threatening at all – they are too ornamental to remind anyone of, say, the early indoctrination of children into the ethics of war. ) The sculptures also have a particular digital feel. Intensive labor is not quite hidden in their meticulous articulation and perfect balance.

Indeed, they would look so good animated, one might think: The “Hot Dog” could bark and then run from the shooting “Gun Dog” and hide in the “Toy Tower”. Why do they just occasionally make an odd sound when you press a button? It seems that Bradford knows their limits: The sculptures would be overwhelmed and subsumed by the spectacle of mechanical movement. Motion would overuse and exhaust their symbolic dynamics, turning them into a circus of ghost signifiers. So the artist imposes one master narrative that guides all minor ones. I think I read the storyline: All abandoned toys, tools, bits and pieces are drawn to the Temple which bears their mother shape -a dog, a person, a head, a toy gun…- and, like a blanket of bees, they cover their keeper. In this sense, the sculptures are already animated. So rather than understand them like movie-props and models for some commercial ready to orbit in the galaxy of commodities, we must respect their immobility: They are absorbed in their silent vibration, suffering with dignity from the terrible Magnetic Disease.

Robert Bradford’s toy sculptures are about the disposable object and all its archival meanings, hidden and overt. They are meditations on the origin and qualities of thermoplastic polymers – smooth, shiny, hard enough to drive a screw through; on the symbolic charge of the toy form, its uses and abuses, its lifespan from fetish to relic; on the reproduction of each form by the millions. I imagine him rescuing the objects and whispering to them about how he’ll let them live for a longer while, before they reunite with their millions of friends melting on African dumpsites, or flooding the rivers of Korea or becoming processed into pellets of consistent material used for injection molding and sheet extrusion; how he’ll offer them another chance before they really get recycled; how maybe they will prefer to depart much later, complete with their destruction certifications, when they are truly ready for custom grinding on request.

The chain of connotations is long –icons of toys, indexes of exhausted consumption, turn into symbols of play and give birth to the larger icon of a toy sculpture, a packed index of artistic labor. As this semiotic meditation embraces each toy or gadget and reflects back to us, our wonder extends to the original makers of each unit. Soon, you just know these sculptures are acknowledgements of the manufacturing, preparation and packaging processes in factories in Guangdong, Shenzhen, Guangzhou; of the monotony, the isolation, the danger of near slave labor in the toy industry; of the two-hour nap on the factory floor at the age of 18 after 18 hours of straight work dressing plastic babies the size of a two-month fetus; of the toy’s shelf-life of a few months; of its adventures from home to mantelpiece to rubbish bin, from warehouse to street vendor’s valise, or boot sale, to home, to rubbish bin. They are an homage to this extreme pathology of proportions – in time, space and value. They remind us that fun is often the fruit of exploitation.

“He’s also been setting off these men” (-this is how a friend in Scotland put it). Robert Bradford has executed dozens of pyrotechnical fire sculptures, and since 2000 he has become quite famous in Cornwall for his annual Beast Burnings on Bodmin Moor and his huge Bombus Bee (2001/2).

Whatever the quick associations with the hi-tech hippy revival of sixties nostalgia for communal celebration, or with effigies of politicians still being ritually burnt in India, Spain, Britain, throughout the world, within or without the framework of neo-ethnic customs, bonfires are fascinating every time. Whether as piecemeal exorcism, pastime or purification, you can’t beat the experience of explosion. But how did Bradford get from bonfires to toys?

“Leave no trace” is one of the mottos of the Burning Man festival in Nevada: While fire has always taken care of waste, today’s rediscovered communal traditions make a point of nominally connecting the intense sensory experience and cathartic feeling of explosion with ecological consciousness and recycling. There might be a link there, between the rescued-toy sculptures and the burnt ones…

For other common traits, let’s follow the lead from obvious examples: IT-company executives burning the yuppy on Silicon Valley in the eighties to ostracize the fear of becoming one themselves; burning the witch in early capitalism in order to kill magical practices and social networks of trust and to hand the corpses to the church and the doctors: Burning an effigy always seems to reenact the therapeutic ritual of sacrifice in order to maintain unity and willed submission in a crowd: The sculpted and often dressed-up log becomes invested with the soul of the unwanted person; the demolition of the image in a carefully arranged, intoxicating elation drives away evil for at least as long as the bonfire lasts.

But then what are Bradford’s burning men? Why burn the symbol of a “generic” person or a head? I won’t try to answer that. Perhaps his risky bonfires obey his private instinct of destruction and catharsis. This Superman gets a kick out of just about avoiding a big accident, thus controlling the order of the universe. To return to the toys, after 2004 Bradford started using wood as the main body of his toy sculptures – the primary material for his bonfires is now revered and fortified, the idol is not thrown into the flames. After years of training in crowd-pleasing “3-D fires”, this idol knows how to magnetize the toys, lure them into its aura and wear them as armor.

To return to our prehistoric oven, burning clay or wood is clean. A big fire with logs, earth, dry leaves and furniture is just an exuberant amplification of the community bond. But you cannot burn plastic toys. The fumes… They’d stink… It would be disgusting… And the toys would melt horribly, still cuddly, ingenuous, dewy-eyed, maybe smiling.