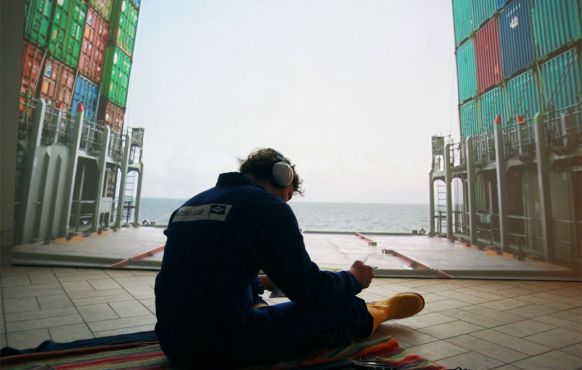 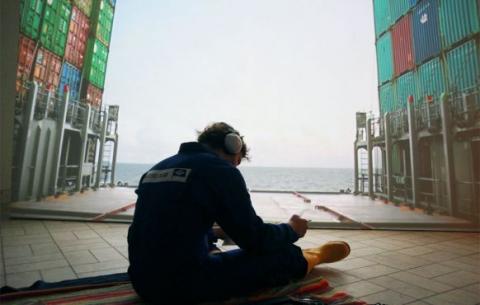 Supercargo tells the story of an artist who gets invited to participate in a group exhibition in Shanghai, China. He boards a container vessel to maximise the cultural and subjective experience of difference, making his trip to China an aesthetic-existentialist adventure.

The passage from Hamburg via Rotterdam to Shanghai connects Europe's biggest terminals with the biggest port in China, now considered today's "factory of the world". As Europe is predominantly a consumer of commodities produced in China, less cargo is shipped on the route to China. The significant exports from Europe to China are considered to be cultural goods, as personified by Christoph Schwarz in this particular case.

The point of departure in Supercargo is a view over a landscape of containers in the port of Hamburg. Arranged in gridlike patterns and stack towers, the containers appear to be small elements of a big picture taken from the perspective of global distance. The container becomes the symbol of a reality far beyond the field of logistics. In essays, documentaries and global reportage feature stories, the container serves as a signifier of the phenomenon of globalisation; impacts on local economies, geopolitical interrelations and global social injustice are only indirectly signified by these colorful boxes.

Schwarz has put himself in the position of becoming an immediate member of this configuration but as the four-week journey continues, the importance of this discourse begins to diminish. Instead, his personal situation and loneliness start to bother him. The protagonist starts to develop strange patterns of behavior, constructing personal relationships with the containers, giving them names and treating them as if they were fellow travellers, friends even. A story of social isolation and gradual mental collapse unfolds.

The omnirelevant sociopolitical scenery and adventurous romanticism of this artistic method (Let us remember Bas Jan Ader, who mysteriously disappeared on a small sailboat whilst attempting to cross the Atlantic) are not the only conditions of this post-industrial, bilateral cultural exchange.

The viewer's perception of the scene before them is altered by a single intervention demonstrated by the narrator as he explains that Schwarz is going to be the only person on this super-vessel, which "operates in semi-automatic routine" on the passage to China.

This is a significant change to the setting of the framework called world building, normally a term used in the field of science fiction literature to describe the world in which a story is based. The author defines the differences between what the reader understands as invariable to their existence (such as fundamental physical laws, structures of society or technological development), and the alternative parameters of the fictitious, parallel universe the story exists in.

This change introduces a new layer of meaning to Supercargo: Together with the narrative about an artist trying to assimilate to his personal situation in the context of global injustice, this brief moment of futuristic fiction allows the viewer to believe that the post-Fordist economy has reached a level of automation through which we are now able to move cargo vessels, packed with our commodities and consumables, over the oceans without any humans on board, only remote controlled via satellites.

For the duration of the film, we can put our skepticism against the global repercussions of our actions on hold and enjoy a temporary deactivation of the critical assessment of our perception. Christoph Schwarz puts it into the hands of the viewer as to whether or not to continue this "suspension of disbelief" even after the film ends.