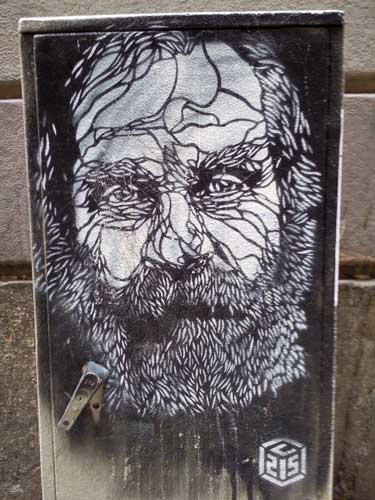 I think the first time I discovered Christian Guémy, aka C215, it was totally by hazard, through two little books : The Blue Book and The Red Book.

Texts by C215, illustrations by different artists, more than an hundred.

The second time our paths crossed, at least with his art, it was in Barcelona, a bit more than 5 years ago.
Once again, by hazard, around a corner of a street.
Then, I saw him again, a bit everywhere, always in the streets, his favorite playground, like an open-air factory.

And once upon a time (as we need to start the story now)...
One morning then, going to the office a bit jetlagged, I've the surprise to discover a new stencil. Of him, yeah, that's the subject of this article, thanks for following.
Which was not there the day before tho.
And that Christian was “in town”, tho (bis).
Mails exchange, thanks to the social network.
We both agree to catch up the day after, for breakfast, like 2.30pm.
(temporal ellipse)

Saturday. 3pm.
We start chatting, quietly, about the concept of stencil, “which replies to a way of expression, to an inspiration. Stencil lets people express themselves...”
As we're at the beginning of november, the “indignados” and #OccupyWallStreet is a hot topic, and we can see protest messages stenciled a bit everywhere in the street.
Him, as me, are on the side of the 99%.
After a mini lesson of graffiti history, as “the street always existed (…) The first spraycans were already available in the 60's” and talking spoke about the book Stencil History X, we get back on tracks (and into the core of the subject) as “more and more kids are doing stencils as a desire to express, a desire which will always be there”.
As for protest, the stencil iconography is in fact part of a more responsible and elaborate movement. “Thanks to internet, the technics are easily accessible; it is a technique which (…) gives a clear message, in a quick and easy way.”

Street art, in a global sense, is a “movement that boomed through internet”: you just need to see the numerous websites leaking the last pictures from the artists, sometimes close to being in real time, with the exact location of the spot, a bit like an open air gallery...

We have a small break, in order to talk about more personal things.

We talk about See No Evil, in Bristol, that we both missed.

We talk about Le Mur, and I'm happy to memorize this spot.

We talk about Jef Aérosol and his amazing “Chut” done in the heart of Paris.

We talk about some graffiti writers (in Paris still) who prevent their photos from being burnt (analog, kids, we talk about a period that you don’t know if you are less than twenty years old)... If that was the case, these people would see their “book” disappear...
About that, he “can't talk in the name of the bombers” as he “paints on supports that (he) considers without value... Just because (he) likes illegality and graffiti it doesn’t mean that (he) likes vandalism.”
This reminds me of the poesy I see in his paintings when I'm walking, so I can’t help approving.
As he says, his work “is really close of what a dj does in a club, by creating samples, loops...”
Close to entertainment, the goal is to have people appreciating his work.
Please be quiet.
I remember a series about tramps. A classical thematic, used by Blek, Epsylon. Like graffiti, the tramp is part of the street ...
However, as he says himself, it is “a subject worth of attention, consistent with awareness .... You can be generous and human, without being radical. I look at my life”.

So, question, “why?”
“It's like the genesis, the beginning is a single cell and then it becomes something more complex”
One has to admit that the gentleman is right (yes, because at this stage of the conversation, Christian has become a Sir) because the white has “a strong visual impact in the street, you see it from far”
Another thing : Christian makes “very solid stencils that are made to be used in the street, not in a studio ...”

Interesting ...
We get back to the starting point.

This art, this kind of drawing, this “C215 style”, where does it come from?

“It’s ironic to see that it was something which was very personal initially, as the night I lost my grandmother, I collapsed, that’s when I had the idea of this white crackled  style, through a sensation of psychological fragmentation. Two years after,I had meningitis, I was in the dark, I had a towel on the head to protect my eyes and I could not see, that’s when I had this hypercolored style in mind. It’s fun to see a very personal thing eventually become conventional…”

As he says himself, “even if (it) is based on a photo, the stencil depends on the result, the' 'thing' to say. A stencil is a drawing. “A reinterpretation, especially when there are no photoshop filters behind.”
Completely handmade in a way, because “(he) does everything by hand, from the beginning, there is a drawing behind it.”

This fragmentation, this kind of mental kaleidoscope, Christian reuses it in the street, his favorite space. The desire to go around, the need to paint, it is this poetry that he loves.
Reason why I catch him in Barcelona, as he has a friend here. Reason why he  painted in Marseille. These feelings that let him have “a permanent exhibition, a year-round, on the internet and in the city.”

“Everything needs to stay poetic, art, its need to stay in poesy, it's poesy that makes art. I like to paint where I am. When you paint behind you, its graffiti, it's art, but when you paint around an exhibition, it's a bit more suspect, it became marketing”.
I leave him, his stencils and spray cans in a sport bag, sitting relaxed on the terrace of a bar, knowing already that tomorrow some new pictures will appear in Barcelona.

One sure thing: I quickly order Stencil History X and Community Service, while thinking about the work of the gallerist  of the future.