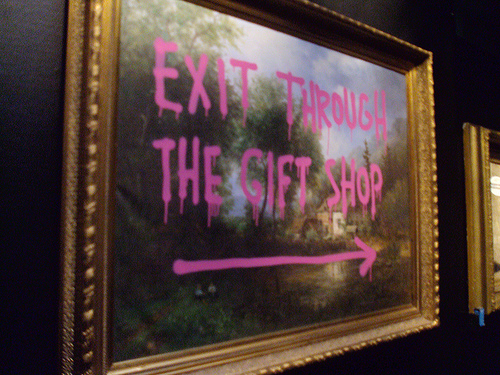 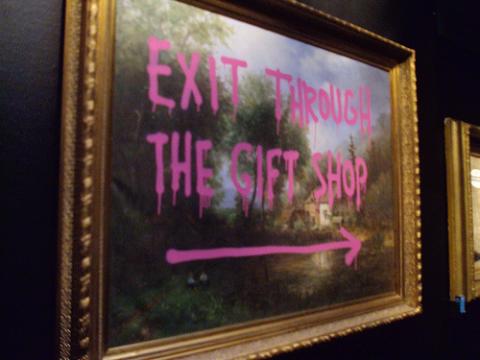 You've got the picture ?

Okay, 't was me when (finally) Play delivered “my” DVD copy of Banksy's Exit Through the Gift Shop. That was a bit like Xmas. You know when you open all the “small” packets, and wait to have the “big one” done later, at the end. Exactly. Me this morning. Exactly. I can call my mom, but she would probably confirm this fact.

Ahem, so I see that some of you understand nothing at all and start to take their phones to call the emergencies (“ahem sorry we have a french idiot who overburned, can we kill him?”) but no no no. Frankie said relax. Situation under control, this kind of stuff.

But let's go back to the beginning.

Earlier this year, I discovered that Banksy, yes, Banksy himself was working on a movie.

Something he called the world's first Street Art disaster movie.

Then started the waiting. Days became weeks became months. But I had the Faith.

When the movie was released in the beginning of march in UK and Ireland and I had the chance to see it in Dublin while I was there for the St Patrick, I was expecting everything.

And I was bluffed. Totally.

I mean, I was awaiting this movie, I was already loving it, I already wanted the ultimate-collectorlimited-edition...

First, you need to like street art. If you don't, don't waste your time, pick-up something else and stop this review. And by “like”, I simply mean to accept that, yeah, paintings on wall can be nice.

Secondly, you need to understand that Banksy is one of the most known street artists. But his identity is still a secret, not like Shepard “Obey” Giant, see? That's all, you don't need to know more.

And that's how everything began.

“Exit Through the GiftShop” is a kind of mockumentary about “the incredible true story of how the world's greatest Street Art movie was never made...”, which follows a french guy, Thierry Guetta, living in Los Angeles, who films all what he can.

He films everything, his kids, his wife, his customers, his life, everything.

Incidentally, he's the cousin of Space Invader. And that brings a direction to his cameraddiction.

He will film about street art...

Following the Space Invaders invasion in Paris and in Los Angeles, Thierry meets André the Giant's Posse, and follows Shepard Fairey in his world domination.

But that was not enough. Thierry wanted to interview “the king”, Banksy.

And that's how it all began...

The guy is right.

By not focusing on his own person, Banksy (as he serves as editor on the movie – seems at least) reveals a part of the street art world, following Thierry Gueta in his mutation as Mr Brainwash. Ousp. I said it. The whole movie is about MBW, the guy behind Madonna's “Celebration” cover.

By focusing on MBW, Banksy interrogates about the value of art, fame and so-called knowledge in our modern world.

Seems complicated? Not so much in fact.

That's the whole question regarding street art somehow: if you're sold onto galleries, do you lose street credibility (as reproached to Shepard Fairey)? if you're considered as the king, are you “SoldToTheBigCapitalism”?

I could also speak about the HolyShitWeMakeAMillionQuids. Or the story of how a stunt about giving fake free money (pounds bank notes with Lady Diana) couldn't be made as people started to pay with it... which was a bit tricky. An artist becoming a counterfeiter, seriously?

I could also speak about the MickeyMouseSecurityTeam. Or the guerilla marketing made by Bansky for the opening of his “Barely Legal” exhibition in Los Angeles, which consisted to put an inflamate doll dressed as a Guantanamo prisoner in... Disney Land.

I could also speak about the PinkElephantWithBrad. Or how to have people focussing on an elephant painted in pink alongside Jude Law, Brad Pitt, Angelina Jolie... and have media coverages for free only for this (Banksy stated “that was for showing our avaibility not to see what is in front of us”)

But enough spoke about the movie, that's a DVD review (I promised this, and I'm the kind of guy who sticks to his word) so let's review it.

First, you have the movie, which is quite normal for a DVD. I can't judge the quality of the video or the sound, that's all what I can have so I'm happy with this (sorry)

Something usual, the deleted scenes, which would have fit in the movie. Let's take an example, if it makes you laugh, please go buy it.

Cop -How OLD are you?

You will find as well the “original” movie from Thierry Guetta, in a “lawyer's edit”, which means 17minutes of visual-delirium as imposed on Malcolm McDowell. Knowing that's the movie about “Exit” is about... That can help for the comprehension. Or not, your call.

Plus, you will have some stickers (so you too baby face can make street art yeyii).

Plus, you will have a pair of useless 2D sunglasses,

I totally admit that this review is the most unclear you probably have read since weeks (or maybe months, if it's the case: thank you).

Because from a man, you discover a world who makes you think about the world,

Because you watch people doing what they like, simply by passion, which actually seems to be an endangered species,

Because you hear people laughing at simple things, in a more realistic world than Walt Jeunet,

Because if you ever said “nice” in front of a graffiti in your city, that'd be a way to see how they do it, and also...

Because it could bring you back to a simple reality: since the beginning of humanity, people write on walls,

So did Banksy and friends around the world...

Simply to express yourself.