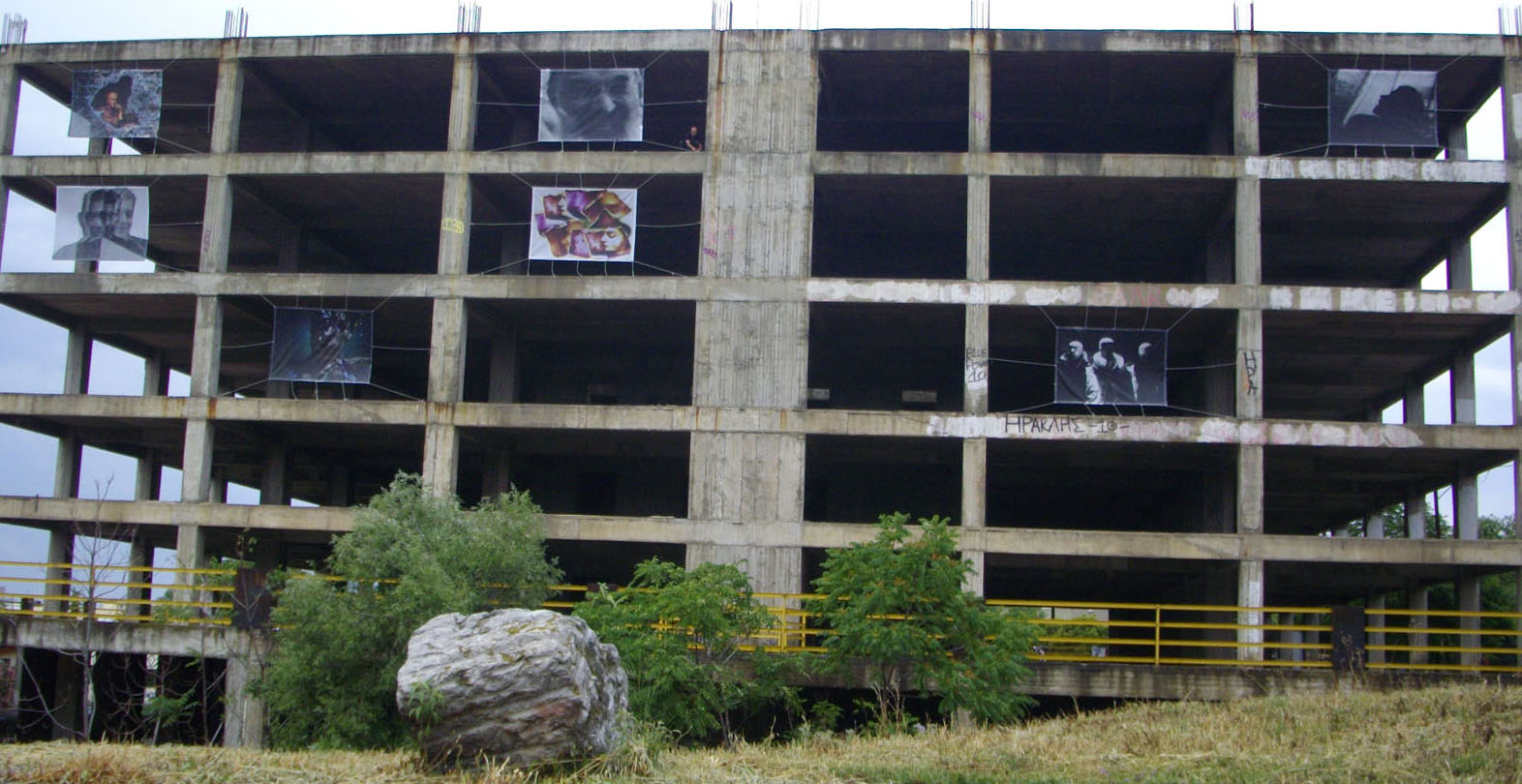 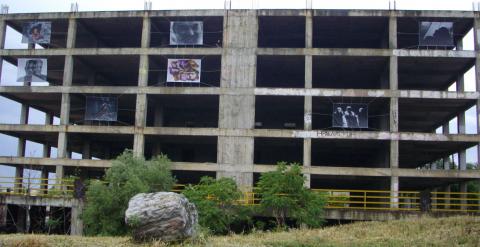 What reactions could be caused by the gradual installation of projects in a building that has been in construction for more than a decade for an experimental period of almost two weeks?

The construction site (an abandoned five-storey concrete frame) has been there for years. Despite the misery of its presence and the scandal of not being used by Aristotle University, although it is adjacent to the prefabs of the Pedagogical Faculty and the School of Fine Arts (how could we make use of it?), it has been accepted by the passersby  as a natural landscape.

The ground floor is used as a parking place. Will the presence of a photograph above them stimulate the curiosity of the people who use it? How will they interpret this action? How and in what frame of mind will they study the photos? Is it possible to change the way they view the photos after about a month of brief, but everyday contact with them?

Agiou Dimitriou street and 3rd of September avenue are roads to and from the regional city, in other words, the same cars pass by, the same hurried souls, the same tired eyes. What could we do for them?

In an area with strong daily traffic, where the same people go by over and over again, can the installation negotiate a playful system  of communication (among authors, buildings and passersby) with something that is not advertising, which will not result in construction or contract work? Will the presence of pictures that will increase day by day in number, therefore in square meters and possible connections as well, make even a handful of people wonder why and when the installation of new works has stopped? Will anybody seek the continuation of the project? We’ll see.

There are other problems to discuss now. We chose portrait as the general subject of our first pilot installation. This secret humanism will be the evident axis connecting the 25 independent images of the installation. 25 photographers, 25 members of the Photography Center of Thessaloniki exhibit images that weren't created for this purpose. Images taken to be seen at the same level as the camera’s level. What will change when the viewing angle changes? In baroque paintings the position of a painted body on the ceiling or a wall was subordinate to a certain perspective dependent on the proposed ideal place for viewing. In our construction site the images will be much higher than the horizon, so how will we see them? How will our models look at us from their new position? And who are those people looking at us from afar, surrounded by frames made of concrete and void (and not of metal or wood)?

And how will the photographers deal with the new material (the flimsy canvas) required by the project? How will they deal with a mediocre quality of photo printing? What will they think of the future of such a limited experiment / proposal? Could the picture step free of quality print restrictions on the public space? The photography in factories or work places, bars, streets, pavements, shop windows is taking steps away from the galleries or the exhibition spaces; however, it is not a different proposal, just the same photograph in different spaces. What changes could the permanent exhibition of photography in external architectural volumes bring to the creative consciousness of photographers? Could it impose self-censorship to an extent? How would photography change, if we add to the dictatorship of the market the view of the owner of the real estate, requirements of the architect, the potential of any power? We are already familiar with the example of the church, that tries to impose an obscurantism, even when this art (that they don’t like) is exhibited in closed spaces and with warning signs.

And the art world? What kind of reaction will the impacting presence of the photographs in public places –following the same logic as mural painting- bring? Can the new technology for printing images bring photography to where painting has been up until recently, or frescoes and reliefs? The ten and twenty square meters of a photographic surface would shout from afar. For a good cause? Will the art world –that sometimes reacts to novelties- accept the demolition of another castle of the old arts? Photography has had a public presence before, but not this size, and not with a permanent character. If gigantic photographs are permanently exhibited in public places, what kind of changes will it undergo in its features and its relation to the other arts?

The advent of photography in nineteenth-century liberated painting from representation, helped it escape from the slavery of the obligation to make something that looks like the prototype, and finally helped it fly to skies that it couldn’t have imagined at the time. The same thing happened to engraving that lived and still blossoms. When it became possible to blow up archives and print with machines used by photography and advertising (that was already overwhelmed by photography), new techniques influenced engraving. A great number of etchings using plotters and inkjet printers lead this art to new paths. Will the same thing happen with the arts on the wall?

And the how much will photography narration change? Can something stand in public place without narration, without the special signification implied by all the works that talk about the great values, the general good for society?  Is the presence of a photograph enough to define any narration? What kind of reactions causes a building with images that don’t tell you something?

Ultimately what do we leave to the five winds?

Is it just five or more questions we bring forth?

Could we express them if it weren’t for the sponsor?

“Photography to the new five winds” is an installation of 25 photographs of 2,5 x 3,5 m on the exterior of  the construction site of the building at the corner of Agiou Dimitriou and Third of September during the Summer of 2010.

You can check http://www.fkth.gr/ for more information

[1] Southwestwind blowing in the Mediterranean.