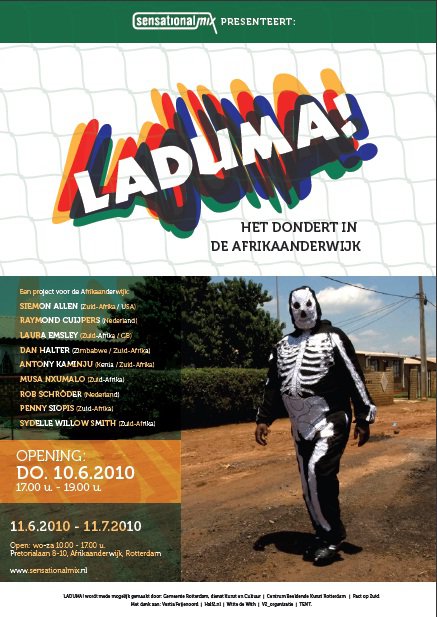 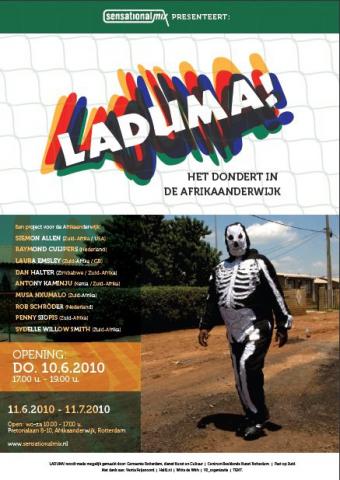 LADUMA!
An art project for the Afrikaanderwijk in the context of the 2010 FIFA World Cup South Africa

"For decades, football was by far the most popular sport among non-whites in South Africa. During the 1920s and 1930s a network of black and coloured football competitions was set up throughout the county. The migration of more and more blacks to the city in the 1930s and 1940s led to the foundation of now legendary football clubs like Orlando Pirates, Mokone Swallows or the Bucks. The players became superstars and role models, though they mostly hardly earned any money by playing. With their accomplishments on the field they gave the community pleasure and a feeling of dignity."

From: More Than Just A Game - Chuck Korr & Marvin Close

A popular sports like football has the potential to stimulate unity and reconciliation between different cultures and ethnic groups, also because love of the game transcends boundaries such as status or class: football is a sport that is popular worldwide and accessible to everybody.

However, in the case of the FIFA World Cup South Africa one wonders whether the gains surpass the negative effects of it. South Africa is a country with stark social contrasts, with much poverty and debt. It is especially the poor inhabitants of the Townships who will be most effected by the monopoly of the FIFA on a.o. the sales of souvenirs, food and drinks and the use of nearly any word that vaguely relates to the event. The gains made by FIFA and their multinational partners are thus predominant and usurp opportunities the event could have brought for the local population, particularly the poorer sections of the black and coloured community who are the traditional supporters of football.

LADUMA! aims to let people share in the pleasure football could bring, but also wants to balance this pleasure by familiarising its visitors with the other side of the coin that these kind of events bring to a country like South Africa. The project further explores in different ways the theme of migration in the context of the history and daily reality of South Africa, the Afrikaanderwijk and football.

LADUMA! is presented in and around an abandoned shop at Pretorialaan 8 - 10 in Rotterdam South. Next to artworks, press clippings and other documentation will be made available to the public to give background information on the wheeling and dealing of the organisers of the FIFA World Cup South Africa, who trademarked everything, even the South African national flag, to strengthen their own economical position at the cost of a whole nation.

Football, migration, culture and identity in relation to the specific history of daily reality of both the Afrikaanderwijk (Afrikaander neighbourhood) in Rotterdam and South Africa, are central to the project LADUMA! . It takes place during the 2010 FIFA World Cup South Africa (11 June tot 11 July 2010). Opening 10 June: 17.00 - 19.00 u.

A selection of photo's of the photo diaries that Musa Nxumalo and Sydelle Willow Smith are going to keep during the exhibition period also will be presented at the Nederlands Fotomuseum.

Laura Emsley (South Africa) lives and works for already more than twenty years in London. In her work, memories of dramatic South African landscapes, contrasted with the poverty and discrimination that came with the Apartheids regime, still play an important role.

For LADUMA! Emsley will connect through a new work the caves of Sterkfontein and the Cradle of Humankind to the Afrikaanderwijk, migration and football. She accomplishes this by focusing on Little Foot, an archaeological discovery of foot bones of the evolutionary link between a quadruped and biped. From the moment creatures started to walk erect, migration, diaspora and football came walking into the history of mankind.

In November 2009 Emsley spent a week in the Afrikaanderwijk to research and film for her new project. From February to April 2010 she fulfilled a residency in South Africa to realise the African part of the project, to link this to the Rotterdam part for a new installation with video for LADUMA!

Emsley furthermore functions as an advisor by proposing South African artists for the project.

Musa Nxumalo & Sydelle Willow Smith, A View From Within

SENSATIONAL MIX will establish a direct relationship between South Africa and the Afrikaanderwijk by inviting the young photographers Musa Nxumalo and Sydelle Willow Smith (ex-students of the Market Photo Workshop) to show the other side of the tournament and the impact it has on everyday life in South Africa through their photos. They are invited to upload these photos to SENSATIONAL MIX on a daily basis for showing them on the website and as video projections and a selection as prints in the exhibition space. The Nederlands Fotomuseum in Rotterdam will show a selection of these images as prints as well.

Antony Kaminju, From the series Soccer Fan | Exhibition view with work by Kaminju

In addition to the aforementioned young photographers, SENSATIONAL MIX invited de photographer Antony Kaminju (Kenia) to show a selection of his work. Kaminju lives and works in South Africa since 2005 and with his camera he captures aspects of everyday South African society, among which an impressive series of portraits of football fans.

Raymond Cuijpers (Netherlands) started his career as a football player and was well on his way to become a pro. However, a serious ankle injury changed this plan and made the decision for him that he himself couldn't take: shall I become a football pro or an artist?

Football still plays an important role in Cuijpers' work. He made drawings and paintings based on movements of the ball in specific football matches. He also made video loops of players' movements. In his work Dutch Football, the artist travels the landscapes and cities of the Netherlands in all seasons with the ball on his foot. For LADUMA! Cuijpers will realise a new video work that contains among others of images of youngsters playing football in a similar surrounding as the Afrikaanderplein.
In addition to the videos, Cuijpers will also show a series of photos he takes on a daily basis from his kitchen window.

The recent installations of Siemon Allen (South Africa) include the display of multiple historical artefacts in which he explores issues of identity and branding. His most current collection project is an extensive web based archive documenting South African audio. Siemon Allen will contribute a work to the exhibition that deals with South African history and that links to the Afrikaanderwijk in Rotterdam.

The experience as a white immigrant, now living in South Africa, informs the work of Dan Halter (Zimbabwe). LADUMA! features his work Space Invader. The video deals with the 8-bit Space Invaders motif, designed by Tomohiro Nishikado in 1978, and the Chinese-made plastic mesh bags that have become synonymous with refugees all over the world. Frequently named after a particular immigrant demographic, these bags are dubbed ‘Ghana Must Go' bags in Nigeria, ‘Guyanese Samsonite' in the Caribbean, ‘Bangladeshi Bag' in the UK, and recently ‘Zimbabwe Bag' in South Africa. In Rotterdam these bags are called ‘Turk's bags'.  Filmed at a Johannesburg taxi rank, a port of entry for many ‘amakwerekwere' (a common but derogatory, if not racist, term for immigrants from the rest of Africa), the video shows a Space Invader comprising these bags making its way over the terrain.

Designer and filmmaker Rob Schröder made, in collaboration with Rotterdam philosopher Henk Oosterling, the documentary Jong in Rotterdam-Zuid (Young in the South of Rotterdam). They gave young people of various cultural backgrounds a camera so they could show their vision on living in this - according to media and politicians - lost area of the city. The montage of these films offers a rare perspective on these neighborhoods.

In Stayin' Alive in Joburg also a group of persons with various cultural backgrounds is presented: migrants from other parts of Africa,trying to find their fortune in the inner city of Johannesburg. Because of the World Cup 2010 the city is being cleaned. This has a major impact on these migrants, being forced out of their, often improvised, housing.

Penny Siopis (South Africa) contributes her video Pray (2007) to LADUMA! She said about the work: ‘In making Pray I combined sequences of this found footage with found sound and found text. The sound is a fragment of deeply emotional Greek folk music. The text is shaped from lines from The Ultimate Safari, a short story by Nadine Gordimer. The story narrates the experience of a group of people crossing the Kruger Park to reach South Africa and fearing being eaten by lions. The story is a powerful evocation of the trials and ordeals of forced migration generally. This could be almost anywhere, and the lions could mutate into any number of mortal threats. I also have another association with this story that has helped keep it alive for me as an emblem of vulnerability. Not long after I heard Gordimer read The Ultimate Safari, I discovered a lion had been killed in the Kruger Park, and in its stomach was a little leather purse. The purse was empty.'