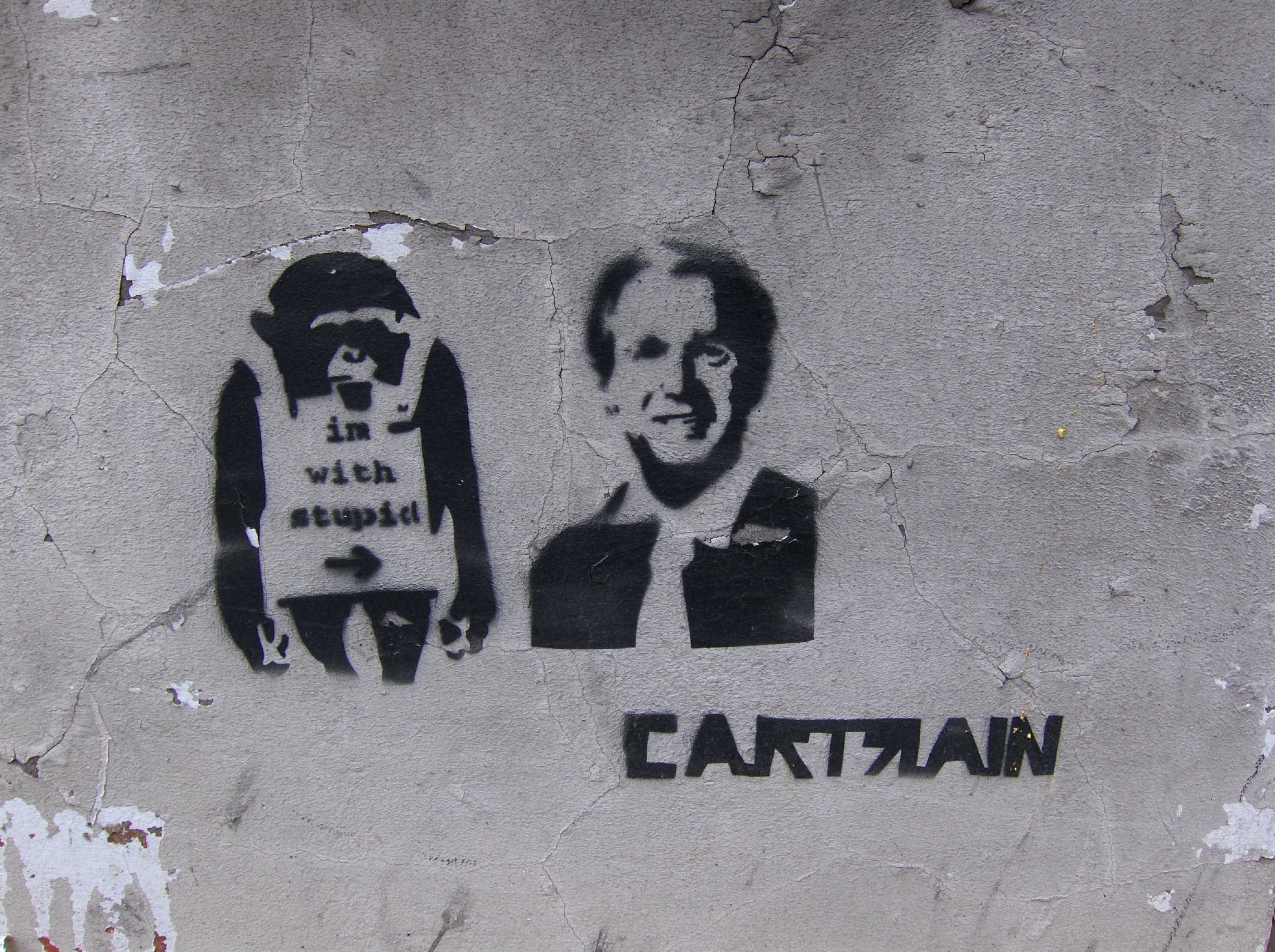 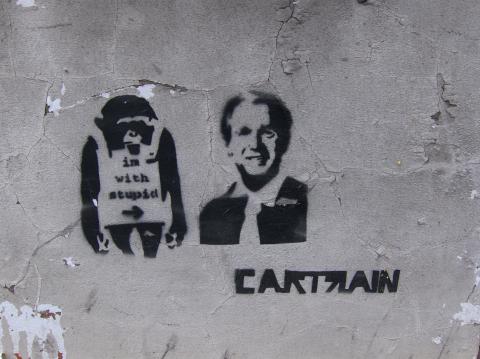 On my left, Damien Hirst, 44 years old, and probably the most expensive living artist.

Known for some works as The Physical Impossibility of Death in the Mind of Someone Living which consists of a shark preserved in formaldehyde solution.

Known for For the Love of God, a platinum cast of a human skull encrusted with 8,601 flawless diamonds, sold at £50 million, which has been the highest price ever paid for a single work of art by a living artist...

Known for having sold a complete show (Beautiful Inside My Head Forever) by auction, which permits him to raise £111 million, a breaking-record for a one-artist auction.

A minute of silence for the sharks, I mean the animals :a fisherman was commissioned to catch something "big enough to eat you" which would inspire fear, that u won't like, even dead (and due to the deterioration of the first one, a second one was caught, good) as well as for the other animals used in these early works (like the sheep from "Away from the flock", the cows and the calves from "Mother and Child divided" or "Some Comfort Gained from the Acceptance of the Inherent Lies in Everything ")
Pray for them. This is not the subject but you should keep this in mind: did they receive something, them, uh? I guess no.

On my right, Cartrain, 17 years old, a nice guy who spent his free-time by making some graffiti (on the street - if you are in London look around you) and some collage (based on images available everywhere)

"I began street art around 2006; I was doing my own thing then when I picked up a copy of Banksy's book in Waterstones; I saw that his style was very similar to mine and from there I moved onto street art and graffiti and the rest is history."

Smile for him, show him some love: he totally deserves it.

So what's the story?

"I believe the conflict began when Hirst saw the collages online; he then carelessly got his legal team involved thinking that his "status" would scare me in to getting what he wants.. I guess it backfired on him, and he won't make that mistake again."

In december 2008, Hirst personally contacted the Design and Artists Copyright Society (DACS) in order for them to hand over Cartrain's collages implying the diamond skull from online gallery 100Artworks.com, and the £200 he made through sales.
Or face the court.

Remind me of something, wait.
Oh yes, "I always ignore money. " said the man himself. And I'm talking there of Mr Hirst.
Boom.

A spokeswoman for Hirst said: 'Damien is not suing Cartrain. This is a straightforward issue of copyright. (this text is extract from a Daily Mail's article).
So copyright for Hirst's work, but appropriation for the others?
Let's go back to the appropriation principle, which is a very common practice in art present in the work of most artists like Pablo Picasso, Marcel Duchamp and Andy Warhol, for example, or even Damien Hirst... how funny is this?
Funny though when Hirst himself is accused by english artist John LeKay to have stolen his idea - he made a crystal skull called "Spiritus Callidus " in 1993, so 14years before "For the love of God". And seems that there's other examples, another one would be The Hymn, which saw Damien Hirst sued for copyright breach in 2000 by Norman Emms. Or... more or less all his most famous ones...

"I have never liked Damien Hirst or his work. Why does he always have to remind me that I'm going to die? I can work that out for myself, that's half the reason I made the collages that he tried to sue me for. Since this pencil incident I think Damien has come out worst. I don't think a lot of people think what he did was "big" or smart..." said Cartrain.

Wait, what is this pencil incident?

Some time after, some fake police posters appear and later Cartrain release a statement asking for a kind of exchange: his collages against Hirst's pencils. (check this another Daily Mail's article)

Regarding this accusation of ""one of the highest value modern art thefts in Britain", "(Cartrain) knew when (he) first saw the pencils it would annoy Hirst if (he) took them, (he) knew they must have had some value after all they are in a major art museum"
But the value? "I never knew though that they were worth as much as "£500,000" "

I made the story incidents short, you can read the excellent article from Dawn Geary, "Cartrain versus Hirst" for more details, pictures and so... Merci Madame.

Now, it's not that I don't like you but I need to go to 100Artworks.com to buy some of his collage.

And you should do the same, as well as tell your friends about it. Cartrain really deserves it. He's a cool guy.

Is this only advertising? For whom? Damien Hirst? Cartrain? What does the boy think?

"Well although I may now be known in the "art" world I just see myself as the same kid who woke up yesterday just doing my thing, I don't think this Hirst issue will influence any of my work in the future to tell the truth I want to move as far away from Hirst as possible and just get on with my own work."

Good boy, I told you.

Sorry Mr Hirst, first you're too expensive for me, except if I take the DIY version of "In the name of God", and also...I'd rather buy Boys Noize first album (ah someone told me it's "Disco Inferno" from Christoph Steinmeyer in early 2000 - my bad) or a disc from The Hours, to have something from you. At least I will have something original: the music.