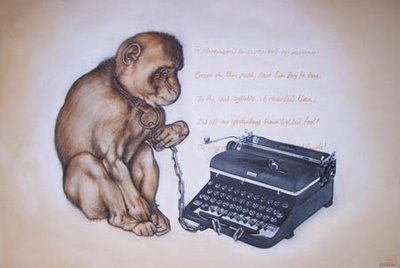 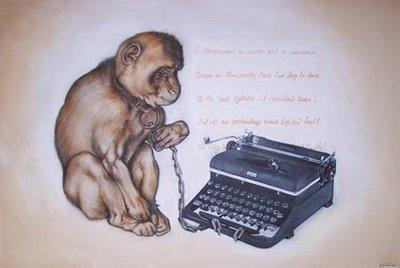 If you are not aware, BANKSY vs BRISTOL MUSEUM, "a unique collaboration between the city's foremost cultural institution and one of the region's most overrated artists" (as they said) is taking place until August 31st in Bristol, and "it contains scenes of a childish nature (that) some adults may find disappointing" (as Banksy said). Why I'm speaking about this? Because it was "banksed" (to banks, new verb, action to correct someone's work after publication, without noticing him or anyone) the first day.

It is so Fight Club that we did the only logical thing : we went to Bristol. To see the monkeys (monkeys see, monkeys do). To speak with the guy who played a Banksy trick to the man himself.

Bristol, 6pm. Around a beer, Adam explain us how he did it. "I came the first day of the exhibition, at the end of the day, and I went straight to the monkey cage. I removed the paper the canvas was
wrapped in, put it in the cage and left the museum immediately. My main problem was not to be caught at this moment, and I knew I might get arrested for this." Which doesn't mean that the whole thing was planned. "I saw pictures from the exhibition before it opened and I noticed the monkey's cage.  It was similar to Typo, a painting I did a year ago, inspired by one of my girlfriend Jen's tattoos. It was funny to see that Banksy and I had created similar pieces: when I do something, I check if it's already been done before. If it has, I forget the idea and search for something else. I thought it would be funny to put the painting in the museum, like Banksy has done." And as Adam loves Bristol's most terrible child,"it's something that everyone would have loved to do, I just did it, I heard he has a good sense of humor".

Okay, just for the two girls in the back who understand nothing, Typo is an 24"x36" acrylic, enamel and ink on canvas, reported as missing since June 13th. As Jen said, if you get the joke you're cool, I will explain it to you so that you will be cool to. It's a direct reference to the infinite monkey theorem, which states that a monkey hitting the keys of a typewriter during an undetermined amount of time will surely type a given text, like the works of Shakespeare. It's some old crap, but you can replace Shakespeare by Chuck Palahniuk or Bret Easton Ellis if you prefer.

Now we made the presentation, why having done this? "I think that every artist wants their work in a museum. Banksy did, so do I." Just for the fun? "What the media seemed not to understand is that it was a joke. I love Banksy, I respect his work and I admire what he does. It wasn't a critique or something. When the BBC contacted me to do an anti-Banksy interview, I said no. I was shocked. I didn't take advantage of anything, I just can now say that I have a painting in the museum. I'd rather be poor than try to cash in on it. Some people do art just to get a name, but I do it for the love of painting."

During half an hour, we spoke about the exhibition, from the cowboy cop - "I don't like him, I mean, he's cool but he makes me uncomfortable (quieter) it's specially his eyes I think" - to the fact that "the bad artists imitate and the great artists steal", which was the perfect occasion to speak about 2 many banksys

Adam McLevey, 2 Many Banksys. CLICK to view more photos by the artist

"2 many banksys is an attack on stencil artists, not Banksy himself. I stopped to using stencils now, simply because too many artists use them, and some are just crap. A lot of stencil work is cheap because it's easy and quick to do. I don't want to cash on something I consider crap."

And it's right that since recent years, more and more stencils have appeared on the streets, "(which) shows that there is a use for stencils, and also a need to have designated graffiti areas. Graffiti is a mode of expression, and you should be able to do it legally."

You know Dr Jekyll and Mr Hyde? Introduce Adam Mc Levey and MCL.
"MCL is when I do graffiti work, it's the street side of McLevey. I do big stuff, but quick and rough compared to a McLevey piece. I'm a perfectionist, I can spend up to 6 months or a year before
considering a painting finished. (...) A painting will last longer than a graffiti piece, which will probably be covered over quickly. As far as street art goes, people will always paint on others, that's just the way it is."

Adam - both as MCL or as McLevey - inspires himself "from everything that is around me, I don't re-appropriate anything in particular, or get inspired by something specific, it's just a global reflection. A lot of people like McLevey but not MCL. But people who like MCL like McLevey, maybe 'coz they are more open minded"

After 3 hours spent unaware of time passing, it's time to finish our Chardonnay glasses and leave.
Oh, Adam, would u like someone to do that to u than u did to bansky? "definitely"

I told you, this guy is cool.