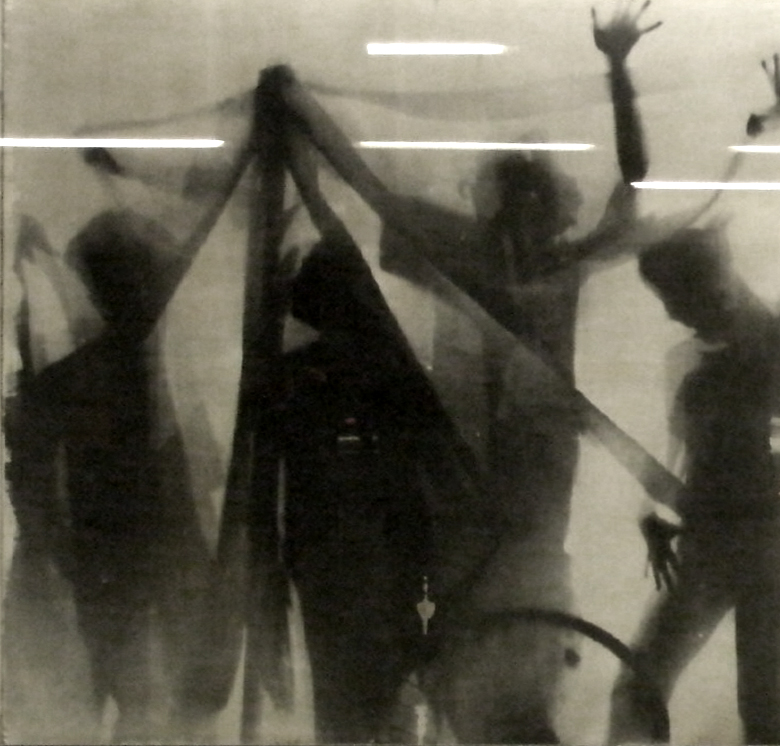 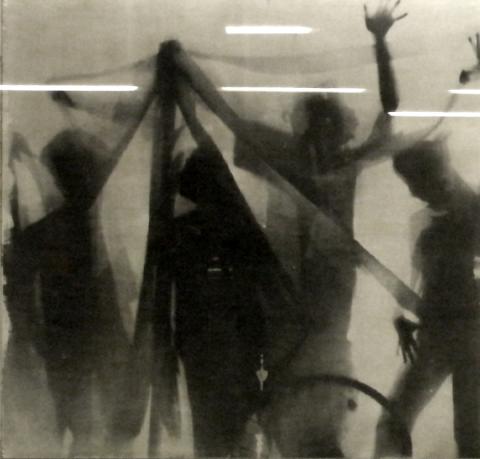 "Shadow is produced by two elements: a material and a spiritual one. Material is the shaded body. Spiritual is the light. Light and body create shadow"
Leonardo da Vinci. "Light and shade". Trattato della pittura

Sometimes a false copy emerges out of the body, vague and elusive. The mysterious shadow, that caused admiration and captured the thought of the human being since the moment it started wandering on the nature of things, is the main element of the Phantasmagory of Identity, a work by the Greek artist Nikos Kessanlis.

He is one of the most important Greek artists that contributed decisively to the renewal of the visual word in Greek art. Throughout his life he never stopped looking for new ways of expression, experimenting constantly and moving incessantly from one city or country to another and from one means of expression to another. The Phantasmagories of Identity, created between 1963 and 1965, were presented in Berlin in 1965 (Katz gallery), in Rome (Dell' Obelisco gallery), in Paris (Biennale of Young Artists, Lacloche Gallery) and retrospectively in Milan in 1970 (Appolinaire gallery) in the exhibition "Pitturificio Italiano".

But what is the Phantasmagory of Identity? The canvas is replaced by a white textile that acts like a screen, falling from ceiling to floor, and instead of brushes and colors we get projectors. Reflections, shadows and spectra projected onto a transparent screen are little by little stabilized onto the photo-sensitive textile and subsequently printed in normal size. Little by little in our head there come memories of shadow play and the folk tradition of Karagiozis.

It is a series of sketches, a combination of photography and shadow play. Onto the photo-sensitive semi transparent textile emerge people posing under the light of the projector; their posture, their gestures and the forms that are sketched onto the cloth are photographed by the artist; then, by modifying the intensity of light he manages to get an endless scale of shadows, applications, distorted outlines and shades of black and white. Under the spectrum of shadow the human figures get a new dimension, immaterial, almost metaphysical, still maintaining elements of their identity. "Through thousands of invisible details the people -beyond their particular distortions- still maintain the instrumental coherency of their personality; a tic, a wrinkle, a body curve, the procedure of gesture, so many little nothings betray you, revealing your identity".

The ancient Greeks used to believe that when we leave the world we survive as shadows among shadows. The shadow, as an absence of light, has been very often connected to absence and death in popular language: "the kingdom of shadows", "the shadow of death" - phrases like these have identified the fear of death with a fear of the shadow. In an attempt to rationalize and to exorcise this fear the popular tradition created shadow play.

It is believed that shadow play was created in China, when, after the death of his favorite one, the emperor Wu-Di (2nd century b.C.) sought comfort in the invention of shadow play. So, the shadow play was used to make a wish come true: the common wish among people to bring back a dead person onto the world of the living.

Shadow play has its roots in a world with its own illusory dynamic, but is presented as reality nevertheless. It introduces a world of play that still allows us to get back into our own safe world afterthe end of the show. The use of a fear-inducing phenomenon for entertainment is what gave to shadow play its amazing power of persuasion, from the West into the Far East.

The principal element in shadow play is a screen, a surface where light coexists with shadow. This screen that separates the players from the viewers captures the attention and acts as a light window, an entrance to a magical world. This theatrical screen is luminous, illuminated by a strong light projected behind the textile; all you need is the puppet's movement to start out the narration and...

The player lays and moves puppets on the luminous screen; flat figures especially made for this purpose, that let the light of the projectors penetrate them and produce a shadow onto the screen. The puppet player gives life to the projected shadow of the puppet; he moves it and makes it talk.

Shadow play differs in form in the West and in the East, reflecting thus the divergences in their social and ideological practice. The main element that changes -beyond the visual diversification in the figures and the subjects - is the following: in the East it doesn't matter if the puppet player is visible to the public, while in the West he remains invisible so as not to destroy the illusion of the spectacle. In the East it is possible to create the illusion nevertheless; they don't consider the puppet player as a stranger that intrudes into the world of the imaginary, but as someone who serves this world and contributes to the ritual of its emergence. Contrary to the East, the Mediterranean thought tends to separate the creator from its creation. The creator is hiding behind the opacity of his creation; meanwhile in the East there is no border to separate the creator from his creation. The visibility or invisibility of the player in the Asian and Mediterranean shadow play reflects the deep rooted primordial beliefs of the people that used it. At the same time, the realistic observation of everyday life provides it with prime matter; sometimes it imitates life and sometimes it intends to exorcise and rationalize its transcendental features.

Seen from this perspective, the adaptation of the shadow as a figure -an element that in popular tradition is linked to the world of shadows, in other words, the world of death- seems to function as a link between the two worlds, the real and the imaginary, the known and the unknown. However, in contrast to what happens in the real world, in the imaginary world of theatre the player is in control of the figure and has the power to subdue or liberate it according to his wishes. He is the master of the "signifiers"; he gives life to the puppet, which in this context represents the human element and depends on the man that moves it; he becomes a carrier of the hope to control human life and to release it from the fatalism and the belief in a superior force that coordinates its rhythm.

Similarly, Nikos Kessanlis uses the techniques and the resorts of shadow play, creating a dimension where the transcendental element rules. The solid human figure is absent from his work; it has been replaced by the elusive and aerial silhouette of shadow, that carries us to a different dimension -a world of fairytales.

Faithful to the shadow play practice of the Mediterranean, he distances himself from his creation and he doesn't reveal his presence onto the luminous screen at all. However, there are two elements differentiating his work from shadow play, giving it different projections and symbolisms.

The first one is that Nikos' figures, vigorous and three-dimensional are rife with life. Nikos' models, "living" people, are moving on their own and take initiative, making his interference unnecessary. In this point the artist acts reversely, staging a particular shadow play. Instead of using "lifeless" puppets (imitations of the human figure) and giving life to them with movement and speech, he uses real people and reveals the immaterial and silent side of their existence. This way, he gives them a ticket to an internal journey, the quest for the other side of identity, a proposal of introspection.

The second one has to do with the fact that he chooses to use living models. The shadow cast by a human being is neither static nor completely flat (comparing to the shadow of a puppet). The different light sources used by Nikos, combined with the fact that his models don't press their bodies upon the transparent screen, let one figure project more than one shadow. This way, the artist doesn't annul their third dimension; instead, he verifies the fact that his figures have volume and life. But the human being is more than a body, it is soul and mind. The artist, a sensitive man, has perceived the change that is taking place fast and tends to convert man into a mechanical being without a face.

A thousand images bomb the eye of man, signs that guide it, transform and determinate it.

The human being is just an eye, receiving the stream of images and signs that command it.

The man of the city is looking himself onto this mirror and looks like a programmed puppet. He sees and undergoes the will of Goddess Technology, whose unfathomable circuits transform this puppet" ].

In an industrial society, where the people look like manipulated puppets, the artist will use technology and will adopt its use to transmit his own message. He acts like a mirror and like a transmitter; by projecting his social questioning through his work, he will make his own effort to touch his viewers deeply. In his Phantasmagories of Identity Kessanlis challenges us to view reality in a different manner -Phantasmagoric- and to seek our own unique and special identity, which tends to be eliminated by everyday life; he provides us with a symbolic counterpart through his shadow play.

Through the Phantasmagories of Identity Kessanlis takes us to the magic world of the shadow, presenting his own metaphysical vision of reality. With the transference of the magical screen of shadow play onto reality, and with him to guide us, we become the initiates of another reality, aerial beings inhabiting enchanted lamps, captives of caves, shadows of dreams...

As East we'll define the area of Eastern Asia, China, Taiwan, Thailand, Indonesia, and India. As West we will define Persia and the Islamic countries of the Mediterranean and Greece as well.