Good Bye, Lenin? A Footnote on the Dismantling of Monuments | HANS-PETER SÖDER 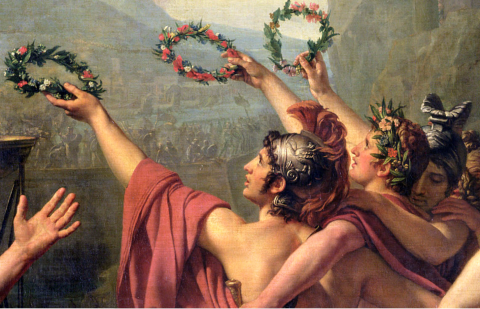 Tell them in Lacedaimon, passer-by
that here, obedient to their word, we lie.

Earth! render back from out thy breast
A remnant of our Spartan dead!
Of the three hundred grant but three,
To make a new Thermopylae!

Lord Byron, The Isles of Greece

When the gods have been expelled from the cosmos, the world they have left becomes boring.

Do we need monuments (again) today? It was Ovid who famously remarked that monuments are the only way to remember the deed (and the dead). They are all that remain of human action: Factum abiit, monumentamanent.[1] The topos, that it is not the monument itself but its text, the epitaph of the cenotaph that remains, is coeval to the monument itself. The fact that we still “remember” the last stand of the 300 Spartans at Thermopylae is not due to the actual monument at the Kolonos hill side (which was only erected in 1955) but due to the European preoccupation (mostly in the eighteenth century) with the event around 480 BCE. Emily Dickinson put it in a nutshell: "'Go tell it' — What a Message."Today, as we no longer associate heroism with the gods, Byron’s The Isles of Greece (1819) and in his call for a new heroism, new heroes and for a “new Thermopylae” (in the context of the Greek Revolution), is no longer a literary monument visited today. The same can be said of the works by Schiller and Hölderlin, Rousseau or Alexander Pope on the same subject; in short, the whole lot that Goethe called Weltliteratur. The same applies to canonic works in the world of art, such as Jacques-Louis David’s gigantic “monument,” Léonidas aux Thermopyles (1814). Because a monument of any kind depends on (con)text, it makes sense that the ongoing destruction (of the literary and cultural canon) also affects the place and placing of themonument itself. As we now remove and dismantle undesirable reminders of the past, we take the monument out of history, as if this history had not existed. By doing so, we not only falsify historical records, we also rob the work of art’s historical textuality. As it is no longer up to us to critically appraise “the message” of the monument, we are led down a dangerous path. By taking the monument out of our sight, the iconoclasts are neutralizing its potential venom, thus preventing any hope for an antidote.This heightens our responsibility to act beyond the politics of memory. Because indeed, what finally put an end to Byronic hero worship, was not some “politics of memory”, but the war machinery and the atrocities of the Third Reich. There are real enemies to fight against, not merely their ghosts.

As Victor Klemperer pointed out, the war against humanity was only possible because of its neoteric language, the linguatertii imperii, which separated the physical body from the body politic. This language put an end to the sanctity and the sacredness of the body. It also put an end to the gods and the places where we look for them. As we are now well on our way towards politicizing language we are also simultaneously policing the arts, one of the last precincts of human liberty. As we continue to grapple with the Oedipus complex in Western society, pulling down founding fathers that cannot move, and as we say good bye to the Christopher Columbuses, the George Washingtons and the Bismarcks of the world, it is important to remember the consequences. Future literary and artistic border crossings and real, material transgressions are meaningless without the continual strife against the epitaphs on these monuments. Without these obstructions, barriers and stumbling blocks in our midst, we lack, as Byron reminds us, the means to find our own Arcadia,where “Delos rose and Phoebus sprang.” Without these monuments and their legacy, palatable or not, we lose, in Byron's words, the means to find our place in the world: “And where are they? and where art thou, My country?”