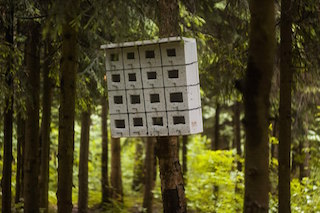 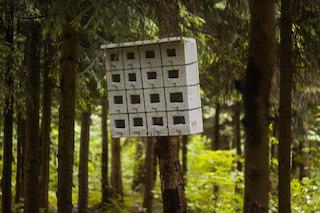 Public art is conventionally associated with formidable forms and colossal sizes. However, recent artistic practice occasionally testifies to quite the contrary.

Working incognito under the cryptic pseudonym Hioshi, the Siberian-born post-graffiti artist is known for incorporating small-sized artworks into the urban fabric of St. Petersburg.

In dealing with the public cityscape, the self-taught artist not only freely exhibits each piece, thereby reaching diverse audiences, but also encourages active spectatorship, experimenting with participation by letting random passers-by and street sweepers interact with the objects on display.

Understandably, the majority of these street objects are destined to oscillate between being privatized and being vandalized: all but one has disappeared or been destroyed. Being made of fragile home supply materials and exposed to the various jeopardies associated with collective ownership and atmospheric conditions, these works embody the very ephemeral essence of art. And this is exactly where the power of documenting is crucial to the work.

Despite their seeming naiveté, intentionally primitivist technique, and vulnerability, some of the artist’s street installations are vociferously provoking.

Consider Fragile (2013), the most radical piece yet made by Hioshi, which was essentially a two-meter-high pair of plaster female legs with an acrylic newborn baby hanging between them on an umbilical cord noose, its tiny hands clutching a Russian flag. The work, originally installed on Malaya Sadovaya Street, a broad pedestrian avenue in central St. Petersburg, was wrecked by the local police within seconds.

Coincidentally, almost all of Hioshi’s works in which one can register a political sentiment hold on to a simple and recognizable visual language: a deliberately neglected technical smoothness and sterile white — or, more accurately, the absence of any color. Such sculptures might therefore initially come across as blank drafts and mere sketchy models.

Set amid grey post-Soviet residential architecture, a dining family is found in a trance imposed by one of the state-approved television channels. The sculpted couple fighting over a Finnish yoghurt (dairy is one of the Russian staples) subtly alludes to the Russian military involvement in Ukraine, which has resulted in a number of international sanctions and counter-sanctions. While TV-dinner (2015) conveys a sense of detachment and alienation, Hypothesis, Disposition, VALIO (2015) is altogether much perkier.

Nonetheless, Hioshi’s oeuvre ordinarily tends to eschew purely political readings and gravitates towards playfulness and open interpretation. The earlier body of Hioshi’s works is more of a subtle poetic remark, rather than a jarring militant manifesto, as exhibited by the artist’s most famous art piece, Sunset Witness (2014).

An anthropomorphic surveillance camera, installed on the Moyka River embankment, sits motionlessly on a rooftop with an easel in its android hands, as if its mechanized eye has just discovered the beautiful world unfolding around it. Christened by the local media as the Russian WALL·E, the installation garnered a considerable amount of press attention, with a replica shortly appearing on the outlying shores of the Gulf of Finland.

Continuing the same visual repertoire of lyrical interventions are In Wild (2014), Untitled (2014), Super Duck (2015), and many other works, some of which tackle a broader societal preoccupation, such as the tourismification of Saint Petersburg, animal violence, poverty, food fetishism, et cetera.

Hioshi’s street credibility vaguely echoes the urban practices of Banksy and Pasha 183, whose inspirational influence is acknowledged by the artist himself.

The new piece, Affordable Housing (2016), appeared in one of the Moscow’s parks and is essentially a nest box designed to cram in each and every “Russian bird” in need of a home — but only under the strict auspices of the Orthodox Church.

The artist’s pseudonym suggests a certain genderless nondescriptness, as it can be phonetically interpreted as the English phrase “he or she”. The artist comments: “I am trying to say that an artist’s personality, and much more so such a piffle as the artist’s sex, is absolutely irrelevant. This is why I choose to retain my anonymity so that my works have no association with my character. I want them to be perceived as they are, as if they materialized of their own accord and without a creator who has his or her age, sex, height, weight, hair color, and positive or negative features.”

Sensitized to recent political turmoil and radicalized authoritarianism, the latest of Hioshi’s work is dedicated to the infamous Yarovaya Law, which was passed in May 2016 and, among other things, obliges telephone and internet providers to store records of all communications, as well as to help intelligence agencies decode encrypted messaging services.

Steeped in dainty lampoonery, Hioshi’s artistic objects creatively contest the mundane and humdrum daily life of the megalopolis and provide a brilliant example of whip-smart public art which has no need to bamboozle the audience with gigantic proportions. The artist's credo clearly suggests that public monumentality is at its most poetic when small.

Iaroslav Volovod is an independent curator and art researcher based in St. Petersburg, Russia. His personal and professional identities have sensitized him to non-dominant experience and institutional practices that address communities at the cusp of change. Currently he is investigating South Asian artists in Britain, in addition to working intensively as a curator with international and local art practitioners.

All images are courtesy of Hioshi