Imaging a Transient History: Murals in the Lower East Side, NYC | DIPTI DESAI AND PRRIYANKA DASGUPTA 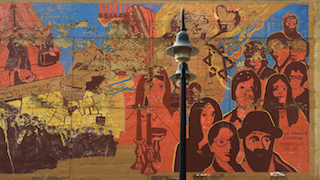 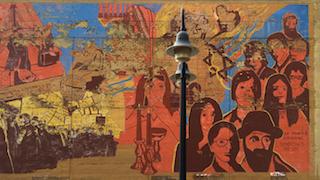 Walking to work each day is a visual experience, as one passes several larger than life murals painted on every other street, in the Lower East Side of New York City. This public gallery provides a glimpse into the history and transformation of this area over recent decades. However, as gentrification has taken hold, many of the buildings that showcase these community murals are slated to be demolished. One such mural is the Jewish heritage mural on 232 East Broadway, created by local teenagers in 1973, which has withstood the test of time, but is now in danger of being erased due to redevelopment. This mural project, titled “Our Strength is Our Heritage, Our Heritage is Our Life,” was commissioned by CITYarts and depicts significant moments in Jewish history in the United States. These include images of immigration through Ellis Island, sweatshops, labor unions, the ‘Forward’ newspaper, which was an important publication at the time, aspects of the Jewish religion, the Holocaust, as some of the teenagers who designed the mural were children of Holocaust survivors as well as the images of the 1972 summer Olympic massacre in Munich, and the Lod airport massacre.[i]

Inspired by the 1930s Mexican mural movement, the community mural as a social and political tool played a major role in the civil rights movement in the United States, first emerging in 1968 in New York City in Harlem, South Bronx and the Lower East Side (Braun & Weissman, 2009). The Mexican mural movement, or Mexican muralism, began as a government-funded form of public art following the Mexican Revolution (1910–20), comprised predominantly of large-scale wall paintings on civic buildings. Mexican muralism was envisioned as a strategic project, aimed at influencing the transformation of a fiercely divided people of Mexico into a coherent nation of mexicanos. The most prolific and celebrated artists who emerged out of this endeavor, los tres grandes (“the three greats”), are José Clemente Orozco (1883–1949), Diego Rivera (1886–1957), and David Alfaro Siqueiros (1896–1974). Popularized as an art of public, social and political engagement, muralism provided a chance for the citizen to see themselves within these vibrant, visual epics, and in turn, grow increasingly aware of their place within the larger community, as well as able to better appreciate the value of public art in their lives. The community murals in the Lower East Side reinforce this activist role. A neighborhood with a long activist history, the Lower East Side is historically home to working class immigrants, including Puerto Ricans, Dominicans, and Jews. Painted on walls here, the murals provide a vital public space for the community to tell stories of their history, hopes, struggles, and resistances. This practice of visualizing community through mural art has also historically allowed these communities to control their own public spaces, especially as the forces of gentrification continue to transform the neighborhood, increasingly prioritizing land for private developers and big business.

As part of Dipti Desai’s class on What is Social Practice Art?, in Fall 2015, students researched and documented all the murals currently on display in Lower East Side. They photographed each of these and spent time around them, observing and interviewing people who stopped to look at a mural, as well as people who work or live nearby. These interviews allowed an understanding of the role of public murals in people’s everyday lives, derived from answers to questions such as: “What are your thoughts and feelings toward the mural? What does the mural mean to you?” As a result of these interviews, what was learnt was that few of the murals in the Lower East Side retain the original activist agenda of the mural movement, which began in the 1960s in the United States. Due to gentrifying forces changing the face of the Lower East Side, many murals are now commissioned by shopkeepers and small businesses, purely to add vibrancy to commercial exteriors. Among these are the murals on metal gates of shops, visible when the shops are closed, completed as part of the 100 Gates Project by Jessica Blowers and Billy Rohan, who commissioned artists to paint on these gates with the goal of beautifying the city with art.

Given the activist history of the neighborhood and the social and political role of community murals, the participants in What is Social Practice Art? created a map, which, to borrow Lise Mogel’s term, is a form of radical cartography or a counter-map. As Mogel explains on the Whitney Museum of Art residency page online; “If maps have long been used as a tool of political power, representing the dominant perspective of places, spaces or people, then the practice of counter-mapping challenges and pushes back against this history, bringing stories to the surface that are not being told, and need to be heard.” [ii] This counter-hegemonic map documents 50 murals in Lower East Side, enabling access to untold/unheard narratives, both visually and textually. One of the murals, Stop Telling Women to Smile, by artist, Tatyana Fazlalizadeh, speaks to sexual harassment, while another unnamed mural is a tribute to Raphael Sadonte Ward, a teenager who was shot exiting a Deli in 2013, in the neighborhood. According to an interviewed subject, the mural originally began with only a few names, although over the past few years, more names of teenagers who were killed have been added, making this mural a living artwork and place for collective remembrance. Each year on the birthday or death anniversaries of these teenagers, people put flowers and candles near the mural. As a result, it has become a site where the community can grieve together and help preserve the memory of their children whose lives were tragically cut short. This mural (See, Image 2) was also the epicenter for the 2013 Lower East Side Unity Rally to “stop violence”.

The mural map will eventually become a historical document, as many of the murals in Lower East Side will be destroyed due to massive plans of redevelopment in this part of New York City. The front of the map provides the location of each documented mural, while its back contains images of the complete murals along with the artist’s or community organization’s name and testimonies from people about what the particular mural means to them. For instance, Javier, who lives and works in a Deli across the street from the unnamed mural (Image 3), says that the mural was created for a television show to be the background for a scene. He says appreciates the professional quality of the mural and goes on to state that he has seen lots of people take pictures of it, including many who come from the nearby church to have their wedding photos taken in front of it.

Mural as backdrop for film and wedding photographs for the community

In this manner, the map also speaks to the daily life of some of these murals in Lower East Side. It is a visual snapshot of the range and style of a majority of community murals in the Lower East Side, and encourages thinking around the role of murals today: What stories do these murals tell and what stories are not told? How do they function in the life of the community? Who sees them? Are murals still a social and political tool or simply urban decoration?

Mural Life in the Lower East Side (Front)

Mural Life in the Lower East Side (Back)

At this time, the mural maps has been distributed to many of the community and activist organizations in the Lower East Side, and is featured on our Art|Education|CommunityPractice blog at NYU as well: https://wordpress.com/stats/insights/arteducationandcommunitypracticeatnyu.wordpress.com

Armed with map in hand and these questions in our heads, as we retrace the paths walked by these students just a year ago, we are struck by the sheer pace at which this already precarious, and transient history is being erased. Wondering what contemporary medium or method, perhaps, might continue this practice of public art, which pushes back against power and visualizes untold histories, celebrating those often disregarded by dominant perspectives, we are left staring instead, at giant billboards eliciting consumption, or flat screens broadcasting blockbuster trailers. Faced with this perpetual and pervasive consumerism, we are reminded ever more, of the urgency to preserve these histories, to devise ways to sustain this practice of storytelling, especially in a time when a significant responsibility of the artist activist, is to visualize and present alternate histories, which confront and rupture the reductive, superficial and glossy images of mainstream media and the culture industry. In this manner, we hope for our map to function, not merely as a historical record of a Lower East Side that once was, but as an incentive for continued endeavors which take on the task of imaging, presenting and preserving histories that would otherwise remain overlooked or untold.

Dipti Desai is an Associate Professor and Director of the Art + Educations Programs at New York University. As a scholar and artist-educator her work addresses the intersection between visual art, activism, and critical pedagogy.

Priyanka Dasgupta is an artist and educator from India. Her installations employ both digital and physical media to trespass boundaries between aesthetics and politics. Dasgupta currently lives in New York City, where she is completing the Digital and Interdisciplinary Art Practice MFA at City College, while teaching at New York University and City College.