Review of A.O. Scott’s Better Living through Criticism: How to Think about Art, Literature, Beauty, and Truth | RANDY LAIST 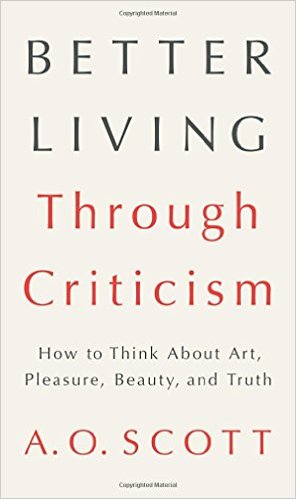 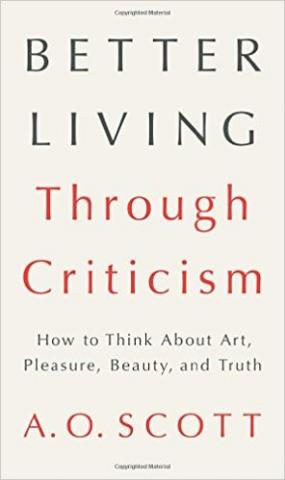 In his 1981 film, History of the World, Part I, Mel Brooks depicts the birth of art: a cave man paints a portrait of a large mammal on a cave wall as a crowd of onlookers grunts in approval.  In Brooks’s movie, this epochal moment is followed quickly by the “afterbirth,” the origin of the critic, who expresses his opinion of the artist’s work by urinating on it.

O. Scott, film critic for the New York Times, can certainly relate to Brooks’s critique of the critic’s profession. In Scott’s latest book, Better Living through Criticism: How to Think about Art, Literature, Beauty, and Truth, Scott details the various ways that professional critics have been maligned in popular culture as snobs, parasites, misanthropes, wannabes, and worse. The book itself, Scott explains, is, in part, a response to Samuel L. Jackson, the actor who instigated a brief flame war with Scott over the critic’s negative review of the 2012 movie, The Avengers.  In essence, Jackson accused Scott of pissing all over a movie that is beloved by millions of fans.  As Scott himself observes, The Avengers quickly became one of the most successful movies of all time, putting Scott’s critique at odds with popular opinion as measured by box office returns.  What gives Scott the audacity to claim that he can judge the film’s merits more accurately than the film’s mass-audience?

Scott’s attempt to answer this question opens out into a wide-ranging discursus on the nature of art, the history of critical commentary on the arts, and the vagaries of the contemporary culture industry.  Scott is eloquent and passionate in his insistence that creative forms of self-expression ennoble us, and that thinking about them with honesty and deliberation is an inherently valuable human activity.  A reader looking for a more specific argument about how a good movie should be distinguished from a bad one, however, will be disappointed.  Rather than advance any particular argument about how criticism should be done, Scott devotes himself to raising questions, suggesting multiple answers for each one, and reveling in the resulting ambiguity.

Better Living through Criticism is not as prescriptive, that is, as its subtitle suggests; it doesn’t make any particular claims about how we should think about art, literature, beauty, or truth, nor about how criticism should be practiced, nor even, ultimately, what it is.  Is it a job, a general undertaking, or a pre-reflective component of human perception?  Scott raises this question on the first page and leaves it unanswered, and his response to Jackson’s attack relies heavily on this ambiguity regarding the definition of criticism.  By conflating the specific job of newspaper writers who are paid to pass thumbs-up/thumbs-down-style judgments on newly released films with the universal human tendency to think about things that they see, Scott equates a defense of journalistic film criticism with a defense of thinking in general.

Whether or not one agrees with Scott that it is necessary to defend the act of thinking, it is easy to see why Scott intuits that the enterprise the professional film critic is in need of an advocate.  As Scott’s historical overview makes clear, the contemporary genre of popular criticism has been shaped by the inheritance of cultural paradigms that came of age in periods characterized by hierarchies, hegemonies, scales of being, and divine laws.  For Aristotle, Matthew Arnold, and, in the early twentieth century, Yvor Winters, it was perfectly reasonable to assume that art had laws and objective criteria.  In the post-war era, however, post-structuralist, postmodern critics in the academy developed a style of responding to art in which the aim of criticism is not to rank a given text as better as or worse than another, but rather to examine the inner logic of a particular text and to understand the manner in which it reflects and responds to the cultural conditions in which it was created and received.

Scott describes academic criticism as a branch of journalistic criticism, a result of the mid-twentieth-century flight of creative writers “seeking shelter from the literary marketplace in the state- and patron-funded sinecures of academe.”  As it is currently practiced, however, the genealogy of academic criticism owes more to philosophy, sociology, and scriptural study than it does to the specific journalistic genre of the book (or movie) review.  One could argue that, while academic criticism has adapted to a contemporary democratic sensibility, journalistic criticism remains rooted in an evaluative model that places its rhetorical emphasis on passing judgment and defending value-claims.

Indeed, Scott strikes a more “academic” tone in his defense of his Avengers review when he summarizes his motivations as a reviewer by insisting “that The Avengers is an extremely interesting and complex artifact, and that its successes and limitations are worth puzzling over.”  Scott’s actual review of The Avengers, however, is certainly much more contentious than this defense acknowledges.  Indeed, in the final paragraph of that review, he implicitly compares the mass-audiences of The Avengers to Nazi mobs at a Hitler rally.  It is easy to understand how Scott’s analogy would have provoked a response from the people involved in the making of the film, and also how Jackson might have reacted negatively not only to Scott’s verdict, but to the background premise, always lurking behind evaluative criticism, that the literati inhabit a privileged moral stance from which to deprecate the aesthetic taste of the hoi poloi.

Ironically, however, the backlash against Scott’s review of The Avengers demonstrates the source of the perennial popularity of evaluative criticism.  While very few readers would have objected to the thesis that “The Avengers is an interesting and complex artifact,” Scott’s tendentious opinion that The Avengers epitomizes the worst qualities of contemporary filmmaking pushes buttons, provokes debate, and boosts readership.  Readers are attracted to thumbs-up/thumbs-down-style criticism for the same reason that many people prefer to get their news from partisan media outlets, because argumentation appeals to our combative, antagonistic appetites.  For the purposes of his book about criticism, however, Scott seems to purposely dispense with an argumentative stance, devoting himself to open-ended speculation regarding the nature of the critique.

Scott’s eloquent, erudite, and witty writing voice serves him well in both modes: he is insightful and engaging both in his film reviews and in the more philosophical tone he adopts in Better Living through Criticism.  One is tempted to imagine what it would sound like if Scott incorporated the conjectural tone with which he has written this book into the reviews he writes for the New York Times.  Scott’s impassioned insistence on art’s power to inspire creative thought suggests how the genre of the journalistic review might be redefined in a way that allows critics to focus less on what is good or bad about a given cultural product and more on what makes it “interesting and complex.”

On the final page of his book, Scott considers the possibility of a more fluid, less antagonistic style of criticism, envisioning a “Utopian dream” in which the “roles of creator, consumer, and critic” will dissolve into one another.  In an age when expert opinion has lost currency and when the job of taste-making has been crowdsourced, newspaper critics like Scott might be able to make a more valuable contribution to the public conversation as interpreters and analysts of cultural artifacts rather than as judges.  A utopian criticism of this kind would not only free reviewers from yoking all of their observations to a polarized up-or-down verdict, but it also might help to reduce the amount of urine that is discharged into our collective media cave.