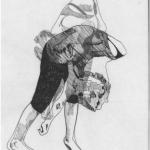 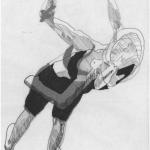 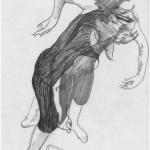 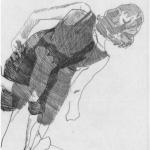 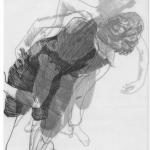 "The image withdraws as ghost or as a ghost of the Idea, destined to disappear in the very ideal presence. It withdraws so as image ‘of'’, as image of something or someone who would not, she or he, be an image. It fades itself as simulacrum or as a face of a being [...] What remains withdrawing from in the image, or what is left in it is withdrawn, with this very withdrawn, it is, indeed, the trace. "

“I tell you who want to learn this craft, you must dance for 'fantasmata' and note that 'fantasmata' is a body promptness, which is moved through the understanding of the measure [...] stopping from time to time as you had seen the head of Medusa, as the poet says, that is, once made the motion, be all stone at that moment, and in the next moment create wings like the falcon that has been moved by hunger, according to the rule above, that is, acting with measure, memory, form with ground and space measurement.”[1]

Giorgio Agamben, in his short book "Nymphs"[2], points out that Domenico calls 'ghost' a sudden stop between two movements, what makes possible to virtually focus on internal tension the measurement and the memory of all the choreographic series. Through the term "dance by fantasmata", Domenico as testified by his own disciples, intended to express many things that can not be said.

Monica Siedler, actress and performer, with a degree in Theater Studies from the University of the State of Santa Catarina (campus of Florianópolis, SC - Brazil), stages her solo "The Worst of Me," which was made possible through Elisabete Anderle Award in promotion of cultural Arts - 2014. Her research stems from a series of exercises to create the "persona" of the performer, where physical and emotional features, plus the ways in which she interacts, are regarded by the environment where she stages and highlighted, exaggerated and exposed as fragility and power of action, a tension between form and disfigurement, presence and absence, interrogating the inevitable splitting of the act of seeing.

Since the beginning of her research, Monica invited artists and the public to establish a field of experiments and experiences to generate the issues she has been working in her project. In this context, dance was materialized in video performances, which resulted from a fruitful partnership with Barbara Biscaro through an artistic residence called "Shared Loneliness" in 2015. Throughout their research process, text and drawings, signed by friends and spectators were published on the project's blog, Her solo had its premiere in mid-April 2016 at the Museum of Image and Sound (MIS) in Florianópolis, in a shared performance with Dj Ledgroove, Vj Bruno Bez, and set designer Roberto Gorgati; other performances were set in different locations of the city in April and May, which had also the participation of visual poet Fê Luz.

The project is not limited to the motion search but it opens to different ways to be put in front of other being and with another. The worst of me looks, questions, recognizes its own limits, its own failures, the ghosts themselves. The artist has explored, in recent years, intersections between theater and dance, also assuming her role as a creative performer. Monica Siedler, may propose a way to exist in dance, similar to Domenico "dance by fantasmata". One way of staging, almost spectral, among images. A dance of erratic behaviors, addicts, (dis)continuous, often triggered by others.

The double, the other of us, equal and symmetrical, potentially destructive. Many writers have visited them, Goethe and Poe, Kafka and Dostoiéviski, Stevenson and Borges. Suggested or encouraged by the mirrors, by the waters and the twins, the concept of double is consistent with its name: there are two beings or two images of oneself. Through repetition of this theme over the centuries, man demonstrates the need of knowing oneself intimately, and the idea of duplicity devastates us like a shadow camouflaged under each mask. The ghost issue is central to Monica Siedler performance. There is no confidence in reason, but in the dance spectrality. Discernment proliferates the ghosts, and the contemporary scene circulates the shadow, circulates the image.