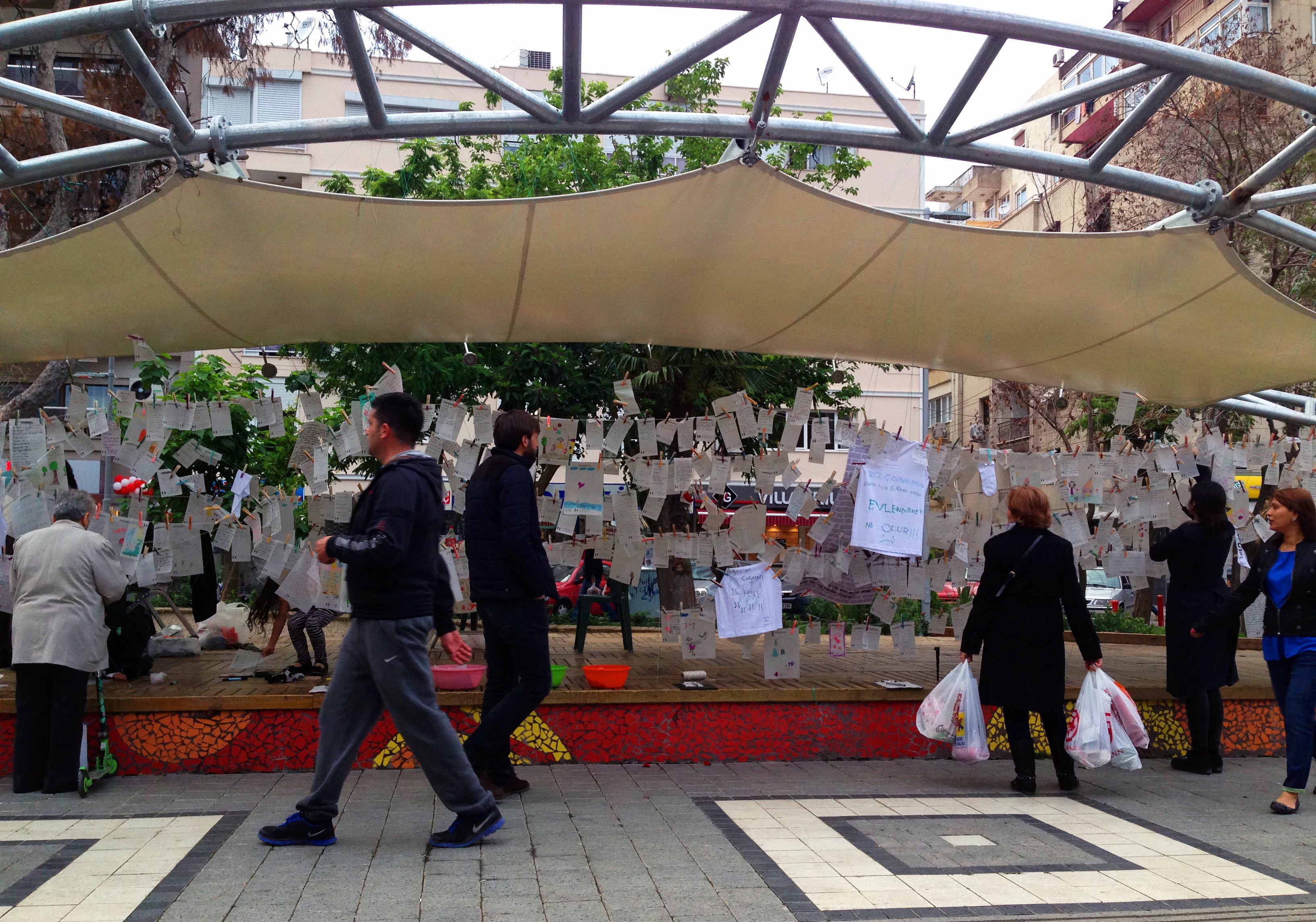 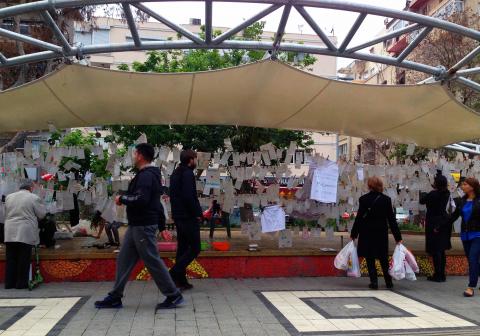 Through a discussion of “(My) Neighborhood”, an ongoing public project conveyed by UrbanTank, this article disseminates how urban praxis intervenes in public spaces, how civic engagement and empowerment is engaged in the practices of the platform. UrbanTank is a design and thinking platform dedicated to research on participatory urban environments [1]. The organization maintains a collaborative network, which in each project platform is open to act with different actors such as academic institutions, municipal authorities and civic people.

Today’s neoliberal economic policies and capitalist operations frame the mainstream spatial practices of our built environment [2].  In today’s city, discussions on the city and the citizen remain essential due to conflicting outcomes of such policies and operations. Yet, what is a city? And what makes one a citizen? Sassen (2005) looks at this issue from the point of globalization and defines the city as the organizational commodity the global capital uses. With globalization, the cities have started to connect to other cities in different forms and developed new networks which are definitely beyond physical borders. Such  integration of cities into a global, transnational network has opened the way for a discussion of a new political geography. In today’s cities, the capital is clearly not the only thing that has a cross-border process but also the labor [3]. People migrate and as they move, new and trans-local communities and identities emerge. Sassen defines this situation as the new form of citizenship. While the users of the city, in other words the citizens, change, the city tries to ‘adopt’ itself to the changing needs and demands. Today in many Turkish cities, global images ‘respond’ to such changing needs and demands, and unfortunately these images have direct and devastating influence on the production of urban space.

This capitalistic environment embodying a top-down vision resulting in planning and design practices based on rigid sets of rules and the images, production of space continues to create desubjectivated, monocultural and placeless urbanscapes. However, the social space we experience is ideally subjected, it has a dynamic structure and its production is a continuous process. The conventional understanding of the spatial practitioner as the author who has the authority therefore becomes a deconstructed paradigm, who is among many agents and yet has indirect influences on the built environment through empowering users that are not passive but active agents taking incentives. If agency is defined as ‘presuming the capability of acting otherwise’ [4], than both social and spatial agencies become the key factors in the regeneration of the current planning and design vision. Anthony Giddens underlines this catalyzing shift requiring a “mutual knowledge, incorporated in encounters, is not directly accessible to the consciousness of the actors’’, the ones in charge of the centralized hegemony [5].

As a response to the current spatial system, Jonathan Charley proposes a method of production that ‘’resists the environmentally damaging and socially destructive aspects of capitalist urban development’’. A method that embodies an ‘affirmative agency’ [6], which does not hold a ‘working against’ but a ‘working with attitude’.

Embodying the role of ‘affirmative agency’, UrbanTank brought “(My) Neighborhood” into life to examine the following questions: Are we involved in decision making in our neighborhood? Or let’s put it this way: How important is it for us to be involved in decision making in our neighborhood? “(My) Neighborhood” interrogates the connection we establish between our living space and the urban environment in which we live by utilizing four different participatory research tools: online and offline surveys researching on individual’s willingness to participate, a video through collaging answers by interviewees in order to share with the public, an oral history which is based on video shootings to share especially old dweller’s experiences of neighborhood in the past as well, and ultimately a public installation which is the focal point of this article.

The event was open to every age group: Children who are under school ages shared their perceptions of the neighborhood by drawing.

.
.
Inspired by the idea of “hanging clothes”, an on-site installation took place in a well-known and frequented park in Izmir Turkey. Since the scope was to create a public forum to reveal and share thoughts of everyday actors, the event was generated with the active engagement of the participants. The installation was composed as an open ended process, it intentionally neither did target any specific age group nor posed certain questions to the participants. On the contrary, the base was austere: clothesline was set to grow to form a transparent surface which would imply the percepted wall effect via the hanging tracing papers with only the statement “(My) Neighborhood…” stamped on top. Whereas, the rest was left to be filled by people. The intention was to situate the neighborhood dwellers in the center, allow them to generate knowledge about their neighborhoods and to uncover experiences that generally remain unknown to the others.
.

Sensing the neighborhood, re-connecting the inhabitants

Civic engagement sits at the core of “(My) Neighborhood”. Although the clothesline net is set by the project team, it has been designed in a way to let the system evolve and expand over time by the willing participants passing through the park along the installation. The organizers were catalysts in initiating the process and bringing the topic, but not consultants, experts or agents providing services. Thereby, the event was characterized by blurring the conventional understanding through shifting roles: People were involved as active producers rather than just being observant of the installation, participating as urbanites. However, these shifting roles occurred gradually: People noticing the event initially were observers and audiences where after a while they became voluntary participants in shaping the collectively formed installation.
.

This civic platform for collective experience and knowledge-sharing was based on the physical engagement with the city. Emphasis was placed on the importance of everyone having something to share with others and being experienced in their neighborhood on certain matters. The actively formed surface with expressions of the particular neighborhood transferred on the tracing papers, gave participants the opportunity to explore diverse perceptions. And their thoughts, suggestions, complaints, claims and desires of the others who they would normally never meet.
.

From Second Left Image to the Right: “Dear Thief, please stay away from our neighborhood. It has been your fourth time. Regards”, “I am fed up with the smell”, “I wish the sidewalks to be disabled friendly”, “We want surveillance cameras”

This article covers the initial phase of the project “(My) Neighborhood” which is composed of several steps. Although the realized installation is an assemblage generating acting, the further steps of the project seeks models that offer an organization and the action as a response to the contradictions that public space contains. The outcomes of the first phase has manifolds. After a careful categorization of the data, the project will go further by disseminating the outputs to be sustained as inputs for the coming step which will be realized in the same neighborhood by the participants.

UrbanTank is meant to support community-based entrepreneurial enablement in urban environments by intervening through research projects. Within the wide spectrum of urban initiatives, Urban-Tank interrogates for experimenting participatory design tools and methods. By ultimately bringing human-centered solutions for urban life, its goal is to explore how people relate to cities and public spaces relate to people today.

The platform organizes itself according to varying topics on different scales and contexts of urban environment. Based on the nature of each project and availability of participants, the platform forms teams of academics, design students, architects and planners.

[5] Giddens, A. (1991) The Constitution of Society: Outline of the Theory of Structuration, Oxford: Polity Press, p.4.