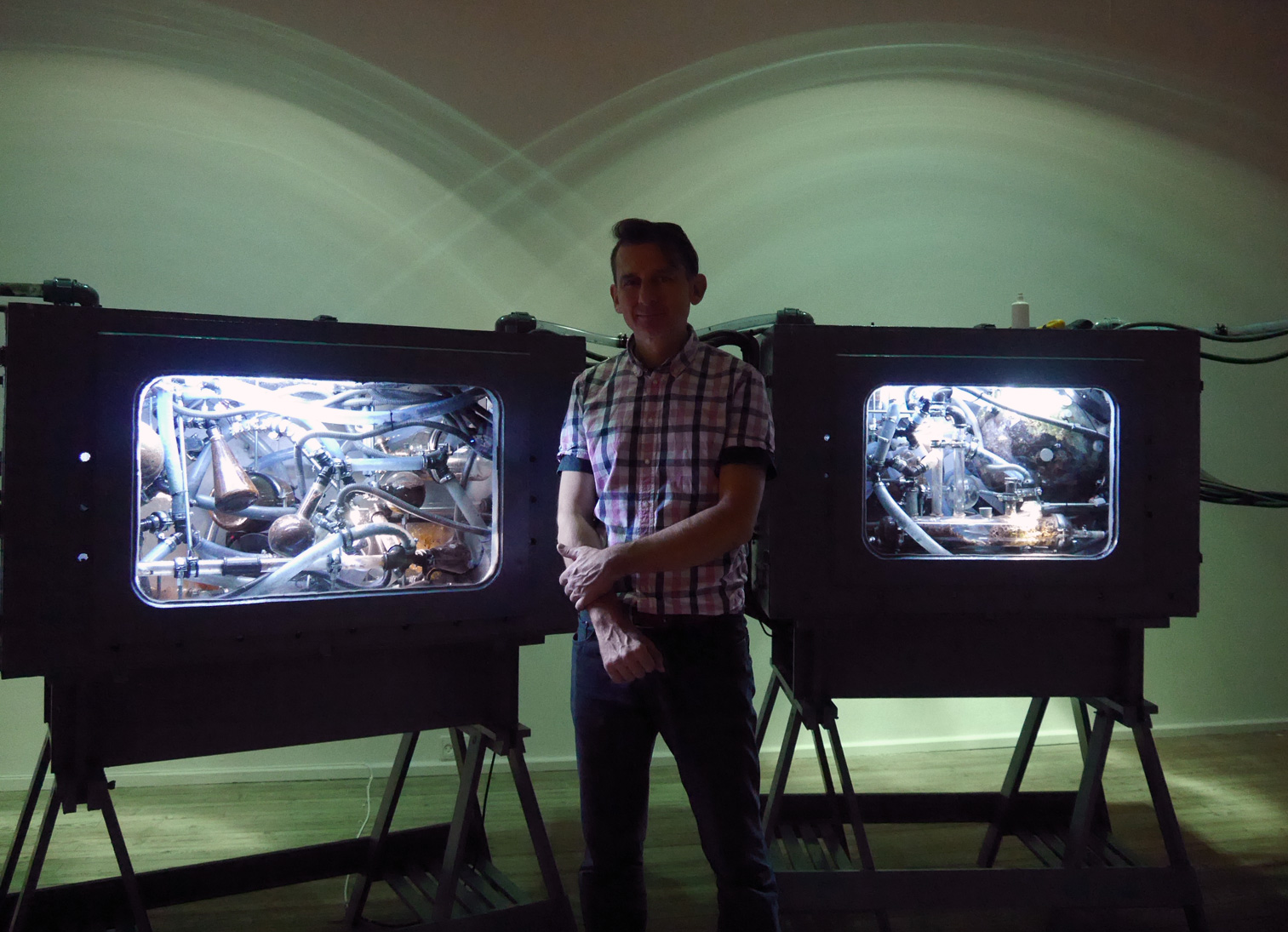 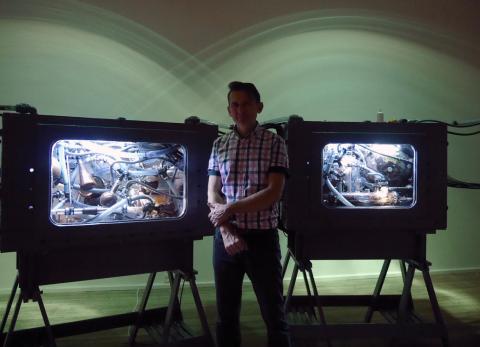 Entering the Kunsthal Aarhus the sounds and lights coming from the strange machinic sculptures by Elvin Flamingo (Jarosław Czarnecki) instantly draw the visitor close. They represent a hybrid natural and architectural space where thousands of ants work feverishly: farmers, weavers and carpenters that incessantly produce and carry their food, take care of their eggs, carry away the toxic waste, build their own environment oblivious to the eyes of the observers. Balancing on autonomous natural processes and human intervention, the Symbiosity of Creation goes beyond ant farming; the artist reveals the social structures and the paths of communication in the ant world, helping us reflect on the mutual influences between culture -in its double meaning, as he highlights-, science and society.

The exhibition was a great success in terms of outreach -bringing together art lovers, biologists, environmentalists and school children among others. It also managed to stimulate an enriching interdisciplinary discourse through the relevant talks and its connection to the Kunsthal's "Connective Making" line of research and exhibitions.

I met Elvin Flamingo on the last day of the exhibition; after giving me an extensive tour of the exhibition, we talked about the artistic reflections and theoretical origins of the project.

Elvin Flamingo at the Kunsthal Aarhus. Image by Interartive

CHRISTINA GRAMMATIKOPOULOU: In ANT’S WAY there are many interconnected ideas that point to the creation of knowledge; the diverse routes of communication, the idea of observation, the focus on details that usually remain imperceptible –like sounds, for example. In what way do you feel that the practices presented in the work relate to the scientific field? How is artistic practice differentiated from it?

ELVIN FLAMINGO: I have no doubts that scientists have done, still do, and will do their work very well. The German myrmecologist Karl Gößwald said a couple of decades ago that there is nothing to add to myrmecology, especially regarding the species of ants that I work with. In other words, the artist’s madness is a little bit different than the scientist‘s one. But I don’t come to the scientific field only with an artist’s specific way of thinking, with the intuition and tendency to present the dark side of matters. Before I crossed the border, I had to get as much knowledge as I could. Then the context of work with ants and working as a myrmecologist has changed and would certainly be interesting in a new way.

C.G.: The artwork’s title alludes clearly to Bruno Latour’s Actor-Network Theory. How does ANT’S WAY add to Latour’s discourse on the relation between the social, the technological and the natural in that sense?

E.F.: The answer is very simple. We add the word “Symbiosity” to Latour’s theory, which does not only illustrate the Actor-Netwotk Theory but also shows that the ANT can also work in the art space. Throughout the project, we proved there is no border between nature and culture. We live on a symbiotic and interactive planet. I hope my idea to stop being only one artist in the project and change my position from demiurge to one of the thousands of actors-workers of creating these "networks" clearly tells us something important. I am sure that the most valuable thing is that Latour adds knowledge to bioart. I am not a Latour expert so we should ask a different person.

C.G.: The idea of control resonates within the work: control of knowledge –as in a natural history museum; control of nature –as in animal breeding practices; control society –like a peculiar Panopticon for ants. How do you feel that ANT’S WAY relates to cultural and political control? How does the idea of being observer and observed at the same time play within the work?

E.F. The philosophy of Michel Foucault tells us to read my work as an illustrated form of hegemonic biopower/knowledge. Foucault’s analyses have already been employed in the visual arts, in fact, they still appear to be contemporary and have returned with doubled force. But we hear, too, Michel de Certeau’s polemics, which appear, thanks to some shrewd moves, to be exploitations of these same systems and the mechanisms described precisely by Foucault, which are quotidian operations and the ordinary everyday, these escape from the control of Foucaultian power and, in fact, avoid it. As the co-author of this work, I see it thus: Michel Foucault stands outside, in front of the incubators; Michel de Certeau, on the other hand, moves within them, in the corners of the laboratory’s architecture; and we, as spectators, attempt to understand one another, and this polemic.

C.G.: On the other hand, there is no control over the nature and duration of the artwork, which could live for another twenty years, whether it is exhibited or not. What is the role of chance in ANT’S WAY? How does the idea of the finite and the infinite influence the perception of the work?

E.F.: The Symbiosity of Creation is permanently unready, permanently unfinished, I cannot predict its future in a certain way. And this forces me to always be ready to do the work, to be interested in my own way. No day is the same as any another, and this makes the project unique and spectacular. Chance is a determinant of our shared quotidian.

C.G.: The installation at the Kunsthal Aarhus gives the feeling of a film set –whether that would be a documentary or even a mid-20thcentury science fiction movie showing the laboratory of a scientist. This feeling is further accentuated by the strongly cinematographic video statement for the project. What are your influences? Do you think that popular culture can influence our perception of art and science?

E.F.: Yes, for sure. I am inspired not only by films, old movies like Brazil, Truman Show, Where the Green Ants Dream, but also by many other things that we can describe by the word culture. Additionally, the word culture in both English and French is also used to describe growing crops and breeding animals. The word culture does not only belong to us, that’s why I chose the title “Reconstruction of Non-human Culture” for the biggest part of the work.

ELVIN FLAMINGO (Jarosław Czarnecki), born in 1967 in Pelplin, Poland. He studied in the Faculty of Painting and Graphic Arts of the Academy of Fine Arts (ASP) in Gdańsk, and received his Master of Fine Arts in 2004. His artistic debut was in 2008 with the para-documentary film Small Spaces (awarded with the Gold Remi Award in Houston, USA). In 2012 he won the Grand Prix at the Gdańsk Biennale of Art with the installation Two Men and the Sopot Sign. He has received grants and scholarships from the Ministry of Science (2014) and the Ministry of Culture (2015). From 2011 to 2014, he was a doctoral student in the Workshop of Transdisciplinary Work in the Faculty of Sculpture and Intermedia, at ASP Gdańsk. From 2012, he has lectured in this faculty.

The Symbiosity of Creation (aka ANTS’ WAY) was his doctoral dissertation and was awarded with the Critics and Editors of Art Magazines Award at WRO Media Art Biennale 2015 in Wrocław.

ANTS’ WAY is part of COLLECTIVE MAKING (2015-2016), initiated and curated by Joasia Krysa. The series is supported by the Danish Arts Foundation, the Obel Family Foundation, Goethe-Institut Dänemark and Aarhus Kommune.