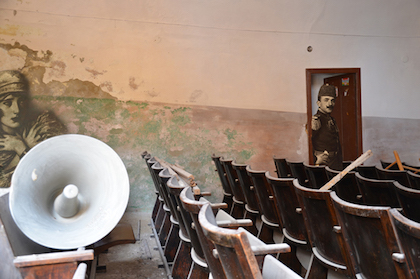 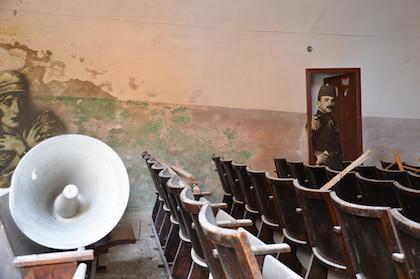 An indefinite crowd of refugees drifts forward uncertainly, on a precarious bridge projected into the void and materialised by an image: a map of Italy, floating on the sea. In front of them an artist: she is pregnant, her look is resolute and has a visionary gaze, and she is heading straight in front, into the future. Perhaps you can write to me is the title of the series which this particular work belongs to; it was created by Agnese Purgatorio a few years ago and since then it has been rethought several times, each time modifying it slightly, and thus changing consequently the issue at stake. This work is, indeed, a digital collage, a technique that allows hybridizations and that the artist has been systematically practicing for many years, obtaining thus her most significant series.

These works are often, but not always, coupled with a video installation or a performance: Fronte dell’Est, Dalla Clandestinità, Perhaps you can write to me, Torino-Istanbul-Teheran, Solo rose per te and her most recent, Learning by Heart, exhibited for the first time in a solo show at Podbielski Contemporary. Agnese Purgatorio’s technical and linguistic choice appears now, more than ever, strategic. In 1994, it entitled her to win the prestigious Panorama European Kodak award at Les Rencontres d’Arles. Indeed, Agnese Purgatorio does not trust the too well defined artistic categories, as well as the rigid dogmas which, for instances, divide and distinguish photography from painting and, also, within photography a specific subject (landscape, portrait) from others.

I would like to stress that photomontage has been “invented” roughly around 1917 and that a good portion of modernism enthusiastically dealt with it, creating some of the most outstanding and disquieting hybridizations in the XX century. Moreover, for almost forty years, many of the most innovative and interesting artists “who used photography” (among other means), in Europe, US and elsewhere, happily devoted themselves to mixing photographical codes with sounds, spatial constructions, installations, projections and much more.

To make the long story short, in her nurturing the image more than photography itself, Agnese Purgatorio does not stand alone. Then again, it may seem quite puzzling nowadays referring to any form of “linguistic purity” in this world of contaminations and mishmashes, in the art field as well as in any other aspect of culture and everyday life.

Agnese Purgatorio digital collage’s strategy entitled her to create a true poetic based fundamentally on the idea of refugee, of “clandestine”. She glances down to the world from a platform represented by Bari, a city on the Adriatic coast in southern Italy, from where she has seen multitudes of clandestine refugees making landfall. She has gazed at geographical and anthropological landscapes, which have mutated faster than the very possibility of even measuring and describing them. She has bridged present dramas with past tragedies, she has done her best to transform her images in powerful magnetic fields with which she has attracted completely different shapes and elements: for example she has intertwined the words written by women convicted in Bari’s prison, with whom the artist has been working for years, with the faces belonging to the artists who trespassed the borders of meaning and history (from Joseph Beuys to Francis Bacon; from Pierpaolo Pasolini to Francesca Woodman) and with the portraits of many anonymous, deprived people, whom the angel of history has shaken off from his wings. Her intention is not to become a reporter but to extend the “clandestinity’s” frontline to the point where she can include in it everybody who does not have, or cannot have or does not want to have, any real homeland, who does not belong to any real place, any language, and who does not have any defined meaning. Starting with herself. During her journey, a few years back, Agnese Purgatorio apprehended the history of the Armenians, people who were victim of the first XX Century’s genocide and who, deprived of the main part of their homeland, left tracks and clandestine memories everywhere along the Mediterranean shores and beyond. Such also happened in Bari.

As a matter of fact, in Bari’s surroundings, in 1924 about a hundred Armenian survivors, founded a village called Nor Arax (Nor means new and Arax was one of the main rivers in historical Armenia, which today marks the border with Iran), which found its economic base in the carpets’ industry, one of the most typical and ancient Armenian wares. Their mentor and voice was a poet, Hrand Nazarianz, who arrived in Bari some time before thanks to his Italian wife, who helped him escape his death warrant issued by the Turkish authorities. His poem, Rimani, mi dicesti. E io restai (Stay, you told me. And I stayed), accompanies the images of one of the Agnese Purgatorio’s newest videos, a combination of sequences taken partly in Armenia and partly in one of the oldest “movie theatres” in Puglia, nowadays abandoned. In 1910 a documentary film was projected there, focusing on the Italian-Turkish international relations; today the artist stages, in the same place, a performance during which she writes the poet’s words on her snow-white apron; she covers herself with words because life goes on but scripta manent (written words remain), memory lasts forever. Agnese Purgatorio, who identified them as the perfect stage for her series, Learning by Heart, has systematically visited the aforementioned and other abandoned movie theatres. A forgotten, repressed landscape, a heap made of contradictory and spurious tracks, a scene in themselves, scene and representation of nonsense and desertion. What an opportunity to stage another story, a different story, another dirty story, created by relics and contaminations: the vertiginously growing numbers of victims of the Armenian genocide, collected one month after the other and referred to the years 1915-16, are combined with some drawings taken from the American fund-raising campaign organization, in order to help Armenians during the first World War (it was called Give or we perish) and with some images taken from a French satire written in the Twenties. This ambiguous, sharp, very striking image becomes the result of a continuous, never-ending editing of the same parts, which literally migrate from one position to another and from one role to another. The last image does not exist; it is yet to be created by the artist. The image itself, one could say, is nothing more than a soft shape, ceaselessly transforming itself; it lends itself, just as soft clay, to interpret the subjective position of the artist in that very moment, the temporary condition of the “I”. The image is a passage in which past and present time, splendour and decay, hope and destiny, beauty and anxiety interweave with one another on the same ground, endlessly negotiating their own space and their intangible and always temporary pervasiveness.

Unintelligible words overheard from a Russian radio station, seraphic voices whispered through the stones of an ancient church and the strong sound produced by the wind, desiccating the closed border protected by the military forces between Armenia and Turkey, next to the ancient city of Ani, accompany the images of the video J’ai utilisé la mémoire. This work is a tribute to all the Armenian women who survived the genocide. The artist tosses bouquets of roses, flower that belongs to the Armenian plateau, in the “canyon” which divides two countries which words, agreements and the negationism’s obstinacy were never able to reconcile, while she recites their names: names that were able to flee the carnage’s anonymity.