Lanchonete.org - A collective project on rights to the city in São Paulo | TODD LANIER LESTER 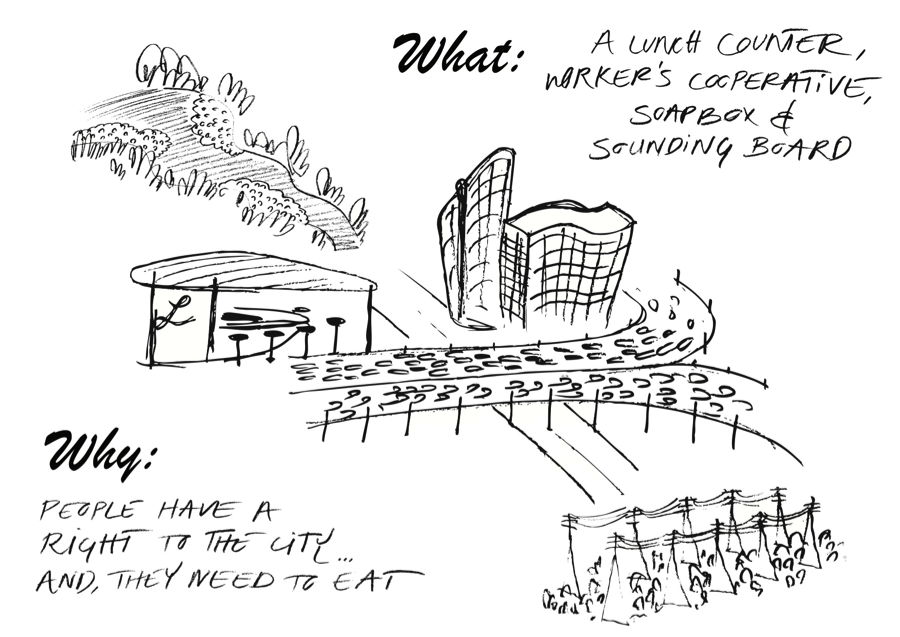 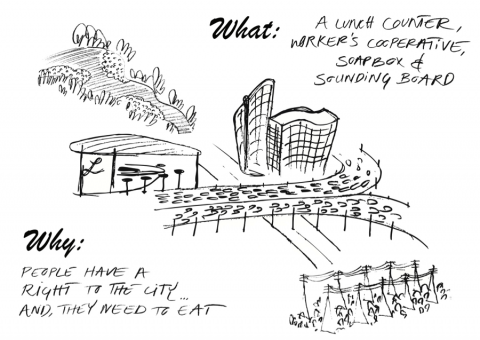 Conceived over the past decade, Lanchonete.org celebrates São Paulo‘s ubiquitous lunch counters and their role in the life of the Center. The project invites a group of international artists to reside in the Center of São Paulo, and develop a relationship with its citizens (local artists among them), institutions, issues and patterns. Launched in 2013 as a research process, the project materializes as a cooperatively-owned lunch counter in 2015 towards becoming a community-held asset in 2018. The Associação Espaço Cultural Lanchonete is the requisite management structure – a local membership body – to guide the restaurant and its cultural programming so that it reflects community desires and the diverse realities of people living in the Center of São Paulo. The restaurant will open in 2015. Artist engagement has already begun.

Lanchonete.org’s material outputs will be a cooperative restaurant and an artist engagement program situated in the Center of São Paulo, an area that is undergoing aggressive property speculation and ‘land grabbing’ under the guise of acceptable, or normal gentrification. While brimming with life and inhabitants, the center of São Paulo and its neighborhoods – e.g. Luz, Republica, Bixiga, Liberdade, Bela Vista, Bom Retiro, Santa Cecília, Vila Buarque – are framed by speculators and the urban planners they influence as ‘deteriorated’ and having ‘underutilized’ space. Capital encroachment[1] begins slowly, steadily over a period of years and then picks up pace, characterized by displacement and demolition, until it becomes irrevocable, redeveloping in a way[2] that reflects a higher purchasing power and homogeneity, and that does not ‘understand’ the current population of a neighborhood as potential users but as a removable impediment to economic growth. As the Center of São Paulo moves directly into the eye of the storm of speculation (similar to New York City’s Times Square just before the Guiliani mayoralty), the utility of an art project that does not take a side – on this or that approach – is to accommodate and amplify multiple story lines that convey daily life in the Center of São Paulo. This means that the project must meet various users and peers where they are whether that be as a participating artist, as a patron of the restaurant, and/or as a community member with concerns and ideas for which the overall platform can serve as a sounding board. Now for the basics:

Lanchonete.org is a site-specific, artist engagement program and cooperative restaurant focused on the interconnected neighborhoods of São Paulo’s Centro. While Lanchonete.org can most easily be experienced, explained and summed up as a popular restaurant, it is a lot of things – an idea, inquiry, business, proposition, art, project, observatory, cultural association, membership body, and, importantly, a visual mode of knowledge production that is non-linear, non-expert, and thus non-exclusive to the art and social finance worlds that it fits most easily into as a project.

In the microcosm of daily life in the center of São Paulo, there is no one central issue that invites innovation, but perhaps for a response to capital encroachment as fait accompli and the cumulative causality of population growth and social service needs outpacing urban planning capacity in the face of corporate interests and – more broadly – speculative tendencies that may approach with in guise of collaboration[3]. Lanchonete.org aspires to be a prism through which understanding and dialogue on issues, conditions, successes and failures that reflect daily life in the Center of São Paulo can gain momentum and flourish, an engine for a citizen-authored feedback loop with the prospect of informing urban policy-setting.

In addition to its role as a single restaurant, Lanchonete.org functions as a catalyst and space for dialogue on socioeconomic conditions in the face of diminishing public space. In so doing, the project acknowledges a cultural subscription to the lanchonete – an urban fixture that numbers in the thousands in São Paulo alone – and how cumulatively they might be seen as a field of cross-class points of consumption throughout the city. As major cities of the world move from limited to contested space for a variety of reasons – e.g. rural to urban migration, immigration, forced mobility – and because institutions, groups and people with the most social and political agency and financial means get priority access to prime real estate, Lanchonete.org is a reference to the global phenomenon for which economic growth sectors exhibit disregard for citizen needs and desires as well as their foreseeable vulnerability to unpredictable spikes in the cost of living.

Lanchonete.org lasts five years, from 2013 through 2017. The first years, 2013 and 2014 are for research, administrative set-up, awareness-building and fundraising. The restaurant opens in 2015, and a series of 8 four-month program and artist engagement periods commence thereafter. The current artist exchanges and events in 2014 are functional (testing different parts of the system) and iterative in nature.

Center of São Paulo – Lanchonete.org is focused on an area that is undergoing fast-paced change that oscillates between predictable gentrification[4] and the aforementioned capital encroachment. That said, there is a robust mobilization asking for thoughtful, people-centric growth comprised of artists, anti-forced eviction activists, cultural producers, community organizers, occupation dwellers and other citizen groups[5]. As São Paulo becomes more and more congested, the Center, which was formerly perceived as a dangerous and blighted area (by some) becomes coveted real estate for its placement and accessibility to public and private goods.

Along with this shift in perception, those desirous of relocating to the Center are encouraged to see occupiers and low rent-payers as freeloaders, even if they have settled areas and beautified[6] buildings that were formerly thought to be unlivable. As if on autopilot, real estate developers who bought buildings during the ‘danger’ period because they were devalued and cheap to ‘grab’ – and the capitalist system they represent – will organically push out the diverse range of mixed income constituencies that make up the Center, for which the well-organized occupations[7] are perhaps bellwethers of change in the gentrification process.

Lanchonete.org is especially interested in food as an aspect of culture and concerned with the broader, related issues of food justice and food sovereignty in complex urban environments. Whereas the project understands some of the major concerns of people living in the Center of São Paulo, which are reflected in its design and values, the implementation process is intentionally porous so that the project may accommodate new and changing issues as they emerge. The project transforms its aspirations into actions in the following ways:

All told, Lanchonete.org upholds the values of transparency, inclusiveness and unfettered creativity, and seeks to amplify the different ways people claim their right to the city.

Lanchonete.org works in consensus with individual citizens as well as community-based organizations (including art spaces), and informal groups. The project’s founding members have been consulting citizens and citizen groups (artists, food workers, occupiers, activists, gardeners and community organizers among them), artists, social movements, policymakers, local businesses, community-based organizations, and educational partners in the Center of São Paulo since 2005. In that Lanchonete.org seeks to accommodate multiple storylines (and even re-envision the actors of an urban policy-setting process), we are in an ongoing process of community dialogue that is both ‘surfacing’ the stories and contributing to the project’s design simultaneously. We realize that there are likely many stakeholders whom we do not yet know. As a project, Lanchonete.org has developed a specific set of values and goals with both the creative community and general citizens in the center of São Paulo (enumerated above). While organic and fluid, there is a shared ethos among our peers that the art world can co-exist with and thrive by respecting the diversity of this neighborhood. One of our community partners, the Occupation São João tells us that collaboration with international artists and cultural producers lends credibility to their approach and use of cultural strategy to ‘build a bridge’ between people who came to the center when it still had abandoned buildings, seeking a better and more convenient way of life, and those now who ‘come down from Paulista’ and often hold negative impressions of occupiers, ethnic enclaves, informal groups and low rent payers. To learn more about Occupation São João, see the Partners APPENDIX.

It is hard to argue with urban plans that promise convenience, improved standards of living, and structural (and public space) beautification; however these aspirations are often future-oriented and do not assure that the incremental changes necessary to achieve them will be easy on the population currently living in areas under heavy speculation.  Without fail, when government, politicians and urban planners start to consider such projects, commercial interests – parties that do not normally take humanistic approaches to redevelopment without a system of checks and balances –are drawn like moths to flame.  By transparently connecting related issues and sustaining critical dialogues in an accessible space contiguous with its surroundings, Lanchonete.org attempts to reimagine the civic commons, a place where every story counts.

Associação Espaço Cultural Lanchonete (Lanchonete Cultural Space Association) is a nonprofit entity in Brazil. It has a President and three counselors, all of whom are Brazilian citizens working in its cultural sector. Lanchonete.org is Todd Lanier Lester’s idea, which he is realizing in collaboration with a growing team that includes Isabel Gandia, Lorena Vicini, and Raphael Daibert. The project is inspired by a range of ideas, people and movements – e.g. Walking in the City (de Certeau), Social Sculpture (Beuys), Artist Placement Group, The Situationist International, and the work of a local São Paulo philosopher, Nelson Brissac Peixoto and his residual project, arte/cidade, as well as the art of Mierle Laderman Ukeles, the films of Frederick Wiseman, the approach to writing of Roberto Bolaño, and the ideas of Henri Lefebvre.

You can read about our recent developments and artist engagement in a monthly blog on Residency Unlimited – www.residencyunlimited.org/dialogue/lanchonete/ To date, the growing group has worked over two years to get the organizational form in order and foundational ideas clear. The physical lanchonete that will open sometime in 2015 is only a part of this platform/container, and represents a patient, performative, business-as-Trojan-Horse mode of becoming a community member.

[1] Aggressive property speculation and ‘land grabbing’ under the guise of acceptable, or normal gentrification.

[4] Left Hand Rotation (a Spanish artist collective with experience working the Center of São Paulo) defines gentrification as “a process of urban transformation in which the original population of a neighborhood is gradually displaced by another of higher purchasing [power].”

[6] I use ‘beautified’ here in juxtaposition to the more frequent notion of beautification as “projects … undertaken by city councils to refurbish their downtown areas, in order to boost tourism or other commerce.” – http://en.wikipedia.org/wiki/Beautification

[7] Lanchonete.org works closely with Occupation São Joao and thereby the Frente de Luta por Moradia (FLM), which is the movement of São Paulo’s occupations. The artist residency component of the project, which starts in mid-2015, will host 8 cohorts of 4 artists (32 total); one artist from each cohort will stay in the Occupation São Joao.

[8] Cities Without Hunger and GastroMotiva met through the Lanchonete.org project, thus confirming that one role of the project can be to make essential introductions. We feel this is an important role because often when people and organizations are claiming their rights to the city in limited-resource settings, there is an automatic default to working in isolation. We seek to build new alliances through this project.