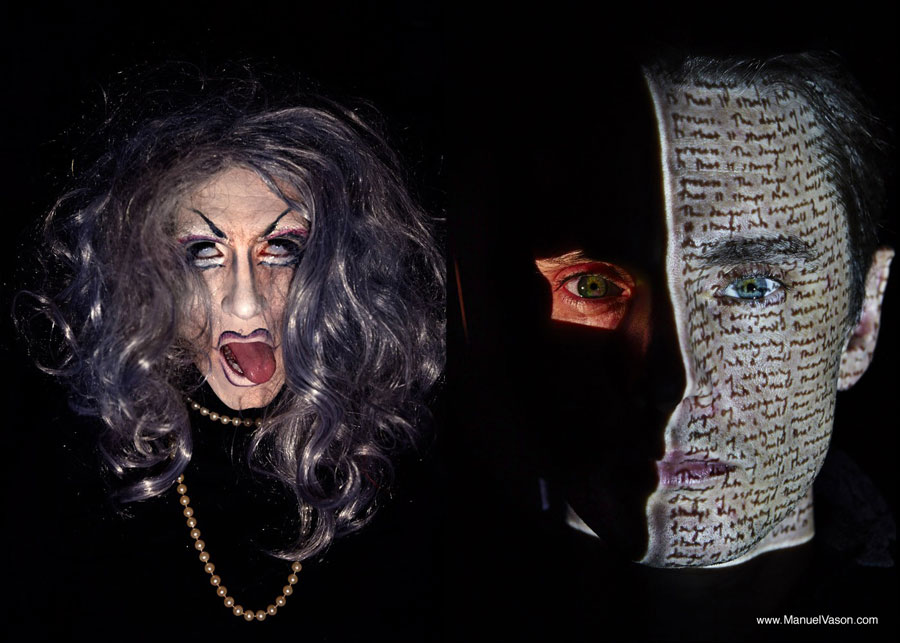 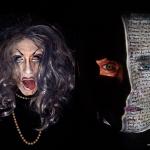 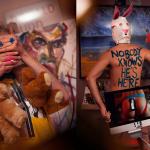 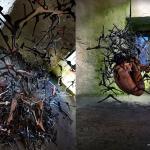 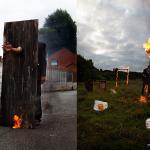 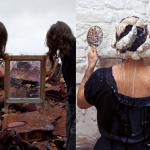 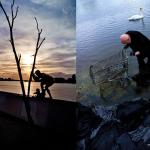 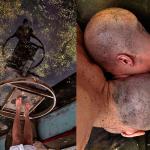 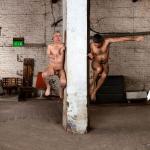 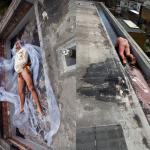 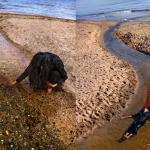 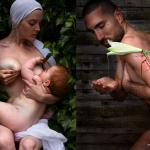 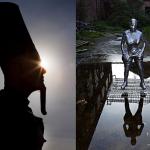 Performance art constitutes a leap from the solid and unchanging art object towards the ephemeral, the transition from a mainly visual art perception to a corporeal presence, materialized through the interaction of bodies before it plummets to the void of inexistence. That is to say, after the performance is through, there is nothing remaining of the work itself but the intangible memory of the people who experienced it. Any videos or photographs of the event are usually treated as documentation. But could they actually constitute a new form of art?

For fifteen years Manuel Vason has been photographing performances through a unique vision: his art is not simply a documentation of a fleeting moment within a time-defined event, but it could be rather seen as a new work of art, created collaboratively by the performer and the photographer, as an idiosyncratic dialogue through visual means. This mutual interaction transforms the performer and the photographer; their coexistence is visible in each other’s work, in a juxtaposition of presence and multiplicity, impermanence and registration, movement and endurance. The moment is lost, but the claustrophobic feeling of a dark space, the curious smell of a stranger’s sweaty skin and myriad other sensations experienced during the performance by the artist and the spectators still linger in the resulting images.

Double Exposures constitutes a study of 'Performance as Photography / Photography as Performance'. For this project, Manuel Vason has expanded the dialogue with the performers, by undertaking alternately the role of the observer and the observed. Structuring the project as a set of diptychs, Vason defined two types of artistic exchange: The first one was carried out in collaboration with artists that had worked with the photographer before; these artists were called to create two images, the first one of their own performance and the second one of Vason who was instructed into carrying out a performance under their direction. The second interaction was with artists who had no previous collaboration with Vason; these were invited to create a performance that would be captured in two images.

Thus emerged a remarkable body of work, which constitutes a reflection of the artistic practice of forty international performance artists and a novel artistic inquiry in its own right, about ephemerality, corporeality, mediation, communication, identity, memory, reflected in the images and the artist's own words, as we will see in the interview that follows:

Christina Grammatikopoulou: What was your initial motivation to start photographing performances? During those years that you have been working on the field, can you recall any performance that was particularly difficult to capture?

Manuel Vason: One of the first performances I have witnessed live was Ernst Fischer at the ICA in London. I was completely mesmerised by the visual power of his body but at the same time confused by what exactly Ernst wanted to communicate. I left the ICA with those same images vibrating in my mind and with the realisation that Ernst was asking for my emotional interpretation and engagement with meaning. At that time I was assisting Nick Knight as a regular freelancer and I had the fridge full of 10 x 8 Polaroids film so I invited Ernst to perform for the camera in the studio. Ernst not only accepted but pushed my understanding of what performance for camera could be; in one of the images he was lit by real fire that was circumscribing the shape of his body on the floor. I still smell the stink of burned hair and skin when I watch that image...

C.G.: Performance is an ephemeral experience of a limited duration with multiple possible viewpoints. In your work you have to select a particular moment and point of view, which will remain in time. How do you make that selection? Do you think it affects the memory of the event and its posterior experience by a larger audience that only knows the performance through your photographs?

M.V.: This decision making, you are pointing out, was one of my main concern. While documenting live performances, I was asked to take decisions for the artists, so while I was gratified by the sense of trust I was given, I was also preoccupied by the responsibility behind that decision. Effectively the photographer of performance has the power to translate the live act into images… the same images will then speak the performance without of course been able to represent it in its entirety. I’m also aware that it does affect the memory of the event and its posterior experience as I have encountered and acknowledge some of the most powerful performances through their photographic documentation. For these reasons I decided to make the ‘decision’ only after discussing the issue with the respective artists and using my photographic knowledge to anticipate obstacles. Ideally I wanted to see the work through their eyes and to do this I had to know what and why they were doing those actions. This sounds like a presumption but it was my mind set. This is why I have consider myself a collaborator rather that an external documenter.

C.G.: The body has a central role in your work. How does your artistic research build your understanding of your own body and your relation to the others?

M.V.: We constantly identify each other through other bodies… we understand through comparison, association and differences. Ultimately we all have a body and we all share different type of emotions and sensations. Most of our feelings are unintelligible and difficult to shape rationally. We need the others to understand ourselves, we need the others to share our uncertainty and receive some assertiveness. I placed the body at the centre of my research as I think the body is the container of my questions.

C.G.: Your practice seems to be strongly oriented towards the interaction between you and the performers, creating a dialogue between two different kinds of art. How is this exchange orchestrated? In what way do you think that your photography impacts the performative act and vice versa?

M.V.: I think it is a relationship of dependence. I think the real art form is the dialogue, the correspondence, the gap and the connection. The need to exchange is really human and this is why we created dialogue to best express ourselves. Through photography and performance we shape our messages and what I’m trying to prove is that every artist-collaborator can use one or the other or both at the same time. Then it is a matter of skills, knowledge, experience and confidence. I’m personally interested in cross discipline methodologies where you apply the principles of one art form to another.

C.G.: In Double Exposures you have created diptychs with the collaboration of the performers, in which one picture is of the performer and the other one is a picture of you acting under the performer's direction. How did it feel to be the subject of the pictures? Which one was the most challenging to create?

M.V.: I felt the necessity to expose my inhibition, I felt the necessity to step away from the safe position of the photographer and play with the uncertainty. In reality I transformed the relationship into a devise of trust. I passed most of the responsibility to my collaborators who were asked to represent their practice using my body, an everybody body, the photographers’ body could be the viewer’s body. The biggest challenge on the project was its duration and the diversity of the artists involved.

C.G.: As Double Exposures registers long-term collaborations with performers (seen in Exposures and other works), it gives the impression of a work-in-progress. Do you have in mind any possible continuation lines for the project?

M.V.: I think this work is part of a life commitment. I feel like I found my role in the world. I’m constantly driven by the desire to explore new collaborations, new artists, new dialogues but at the same time I’m fascinated by the potential of deeper the relationship I have already established and applying new methodologies to challenge my expectations.

Since I finished the Double Exposures project I also have a new voice that is calling and it is coming from deep inside me… a sort of alter ego that is knocking the door...