"Plant your Siyadeh": An Interview with Alia Farid | CHRISTINA GRAMMATIKOPOULOU 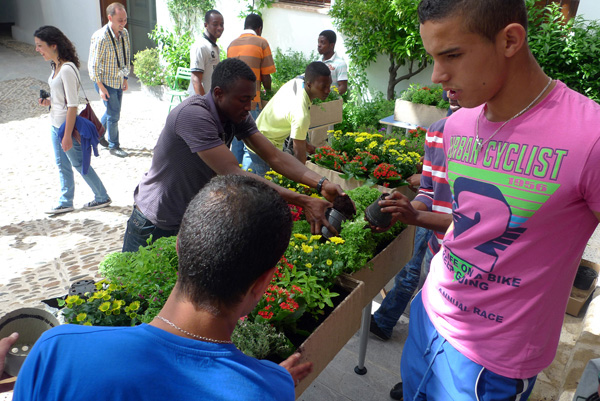 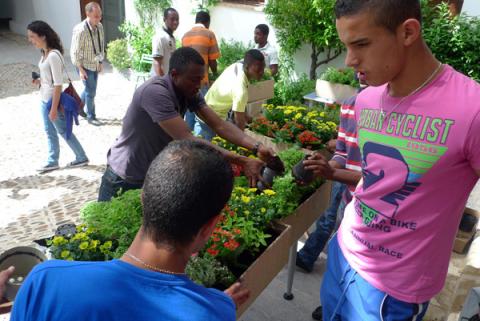 CHRISTINA GRAMMATIKOPOULOU: The project of “sidayeh-planters” forms part of your artistic residency in Casa Arabe in Cordoba. Does the urban and cultural landscape in Cordoba reflect your personal background in any way?

ALIA FARID: I have never really been in Córdoba up until now. Immersed in it that is. I mean I might have when I was really young and touring Spain with my family… but never as an adult, and certainly never quite conscious of the dual heritage of the city, which somehow, yes, resonates in me. I think the many layers of history of Córdoba (manifested in its urban and cultural landscape) does reflect my own cultural background. I think that is why Casa Árabe and Delfina Foundation invited me to explore working here.

C.G.: When you first went to Cordoba for the residency, you asked not to be given any maps or information about the city. Subsequently, you got the initial inspiration for the “siyadeh-planters” from a misconception about an outline on the floor of the Califa palace. To what extent could your experience and knowledge influence the perception of a previously unknown place?

A.F.: Yes, when I arrived to Córdoba I asked not to be given any maps or information because I was interested in making my own connections, associations, and “readings” of the city. It’s a bit scary as I don’t have an great sense of orientation, and finding my way back can sometimes take hours, but I think this “not knowing” is where a lot of the most interesting occurrences take place. Previous experiences and knowledge inevitably influence perception –in everyone, that is– oftentimes leading to misinterpretations. But misinterpretations are not necessarily bad interpretations. They can also give way to new meaning. This project, in fact, was a misreading of something that caught my attention. Amira, the Coordinating Director of Casa Árabe in Córdoba chuckled when she saw my drawing and notes (in a good way) as if astonished by this connection, which she had never seen despite her 6 years living in the city.

C.G.: The “siyadeh-planters” project is carried out as a collaborative action between you and the participants, who take up gardening as a form of artistic action and meditational practice. How does the project relate to the participants’ everyday experience? What is their role in the final creation?

A.F.: Many of the participants have never planted anything. More than gardening, I think they were interested in meeting young Muslims like themselves that have adapted their faith to more closely suit their own lifestyles. Indoctrination is a terrible thing with even more terrible repercussions, something we all agreed on in this workshop.

C.G.: The siyadeh designates a religious space, transforming any place (public or private) into a space for prayer. At the same time, your work often transforms the public space into a place of artistic action. In what way have the preconceptions about public/private influenced your work?

A.F.: Public space is, I think, most accurately defined as contested space. Whether outdoors or indoors, I think what makes a space public is the multiple perceptions over shared space. There can be private spaces in the public realm, and public spaces (and/or ideas) that affect very personal matters. Ultimately it’s how you negotiate things, different contexts require different strategies.

C.G.: Artistic residencies are closely linked to nomadism and mobility as basic elements of cultural production. How do these concepts influence your own work? What more could you tell us about your experience with the residency in Casa Arabe?

A.F.: Residencies are a fairly new thing to me. In fact, it is only now that I am beginning to explore this format. I have traveled a lot, but because I was brought up between two very distinct geographical locations, and so I’ve always lived a sort of “nomadic” lifestyle. But going back to residencies, it’s a lot of pressure to have to think up something within the framework of a residency. I remember I was really nervous when I traveled to Córdoba for my first visit in February. I wasn’t sure I’d be able to come up with something that wasn’t redundant to the inhabitants of the city. Also, I’m not really used to developing work upon invitation. I’m more used to working without the pressure of complying, even mildly. But it’s interesting. You learn a lot. In this case I was invited to come up with a project to be displayed in the central courtyard of Casa Árabe during the annual Patios Festival– a tradition event that has recently been included in UNESCO’s convention for the safeguarding of Intangible Cultural Heritage. My fascination with monuments and the corresponding anti-monument discourse made new sense in this context. I like the idea of protecting practices and temporary manifestations more than imposing permanent structures.