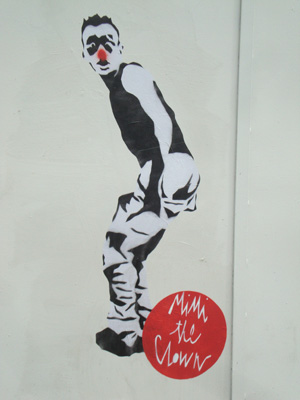 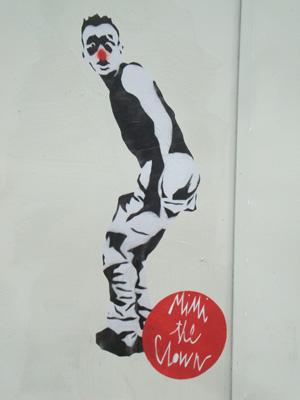 When I was younger, I was afraid of clowns. But after a discussion over a coffee in his studio, I was no longer afraid of Miguel Donvez, the man behind the clown.

Mimi has always had a penchant for social and helping others, especially youth. Considering that "politics tend to forget that we do not live in the electoral term, creating projects in 5 years and then everything stops... The construction of a human being is made in several years." He cites the "free indirect discourse" (when an author express himself through a character) from Pier Paolo Pasolini to explain the fact of embodying a character to express his art.

And finally "the clown has imposed himself, he came to see me and the meeting between the artist and this character gave Mimi the Clown. The clown is the jester who is going to say his truths; we do not draw a clown. It allows me to express all the feelings about this hypocritical society, this consumer society, this race to immediate enjoyment..."

This notion of immediacy, of which Facebook could be the symbol because you must always be in the "timeline" (and thus create an image every two hours), is the opposite of an artistic project which requires time. "The time of creation is not the one of that consumer society in the sense that there are waiting obligations, maturation necessities, as the brain of a human being who needs time to learn, integrate. However, society goes more quickly, which is the opposite quality."

Painter artist rather than street artist, each canvas from Mimi has several readings, combining energy for the background of his paintings to the apparent simplicity of his stencils. Stencils which are essentially painted in black and red, the favorite colors of this friendly clown.

The background of his paintings (very elaborate) allow, through games of transparency, to pass (the) message(s), and to return to the idea of living a bit like "a kind of wall where the message was written, erased, covered, rewritten." This volunty of expression perhaps came in part from frustration, when thinking and writing he was not read. "So, I made paintings, with writing, and even blocking messages, people were forcing themselves to read, jumping from a message that was not read to one that was."

Conveying messages to make even one person think? That would always be something gained, because for him, "the day I would have nothing more to say, I will stop, technique is only an excuse for expression. If I do beautiful, it's to attract the eye and get the message. The artist has the duty to reflect and to help to the others reflect. Because he has the privilege of taking time and stopping to observe and to think about a topic, trying to understand and contemplate on society... To ensure that it is not immediately visible at first glance, that you will have to make efforts to understand the message, take the time to look at it, upside, down, hidden, not hidden..."

A bit like life, which is not simple. As an old painter told him "being explicit canceled the dream, the wandering of the mind"; whereas the brain is a little slow machine that needs time. And the multiple levels of reading allow thinking as "the history of mankind does not stop today, we must consider the whole humanity, the man of today, of yesterday, of tomorrow..."

Mimi the preacher? Nay, but when we know that a theory of philosophy published may be destroyed after six months if it does not sell, it reinforces the feeling that "returning to the brain to think" is a necessity ...

As an we artist, "everything takes time, some parts are fast, others take several months, especially with the process of experimentation." This continuous experimentation (something a writer has once termed as "invisible work") can be found for example in his taste for the staging of theatricality, which will help him to pose, with exacerbated expressions, because he puts himself on stage for his stencils.

This taste for the stage, it is found for example in 2007, in the midst of presidential elections with his campaign "For an assumed ridicule, vote Mimi The Clown", campaign that he would resume in 2012 with "Super Mimi president" because "after having seen the ridiculous of the politics, I couldn't represent myself."

A Clown without Borders, Mimi have also been presented in Belgian legislative elections, because for him, "the politicians are puppets who follow the company and banks in complete shift with today's society, (...) coaching solidarity that they do not apply to themselves".

This consumer society therefore brings Mimi on the subject of advertising, and why in 20 or 30 years, companies continue to swing and cosh the same message. "Starting in the street, I was expecting a quick response, but no! It took a lot longer because people react slowly, take time, learning takes time..."

A further parallel with street art, because "learning is based on repetition. This background work, this repetition is identical to the work of the painter, gymnastics gesture that will bring to learning, a bit like becoming ambidextrous. In the end, to get a message means to be present."

Consumer society against information society, the onslaught of one or the disappearance of the other, a piece of information chasing the other, and "people have little memory, there is a kind of drowning, the erasing history... The problem is not to find the info but to select it, to make an intelligent synthesis."

Time flies, the clock is ticking and Mimi is impatient to go back to his paintings, stencils and acrylics, as he is a painter and "wants to paint." We end up the coffee listening to rock, musical influence for Mimi, with the Rolling Stones, Jack White, Didier Wampas or Mano Negra. Manu Chao whom he saw in concert and "exudes energy, a positive energy" or Nirvana, "for the desperate energy."

Energy that he found also in the workshops he leads with children to share his love of art and painting, a kind of peace activist for a better society.

I leave his studio with a small smile, happy to have met a clown that for once doesn't scare me, and having haste to meet him again at a street corner, here or there.